Timberwolves vs. Spurs: What to Watch For 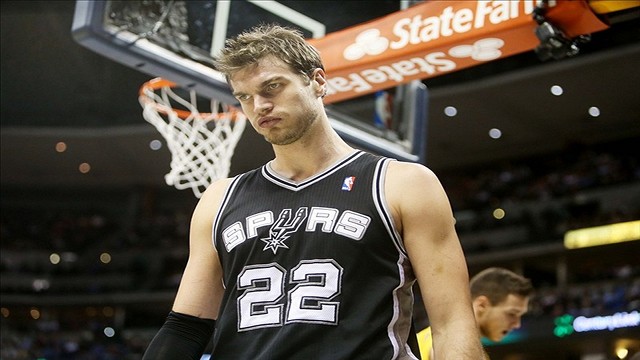 The Wolves are back to .500, with a season record of 11-11. They are currently on a two-game winning streak, having beaten the Pistons soundly on Tuesday in Detroit and eking out a win over Philadelphia on Wednesday at home.

Tonight’s game was supposed to be the second between the Wolves and Spurs this season, but the first–The Ill-Fated Wolves Home Game in Mexico City That Never Was–was postponed on Dec. 4 because Mexico City Arena went up in smoke. 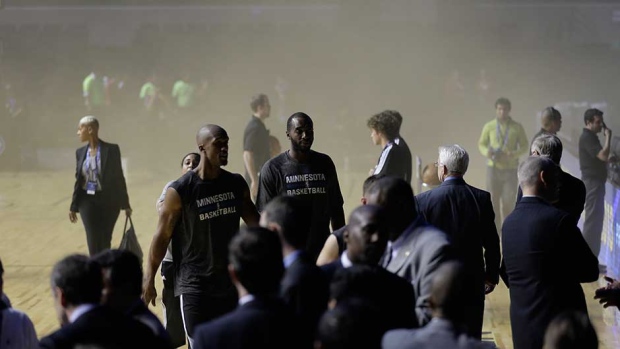 (Eds. Note: This really was an NBA pre-game scene. Contrary to popular belief, it is not an iPhone pic from the Snoop Dogg Puff Puff Pass tour.)

Anyway, the postponed game has not yet been rescheduled, but it will apparently be played in Minneapolis rather than Mexico (yay!).

Extending its winning streak to three tonight in San Antonio will not be easy for Minnesota.

The Spurs are currently 17-4, tied for third-best in the NBA. Tim Duncan and Tony Parker are timeless, and continue to play at a high level, as they do every season. Manu Ginobili, who rounds out the Spurs’ Big Three, remains a valuable asset off the bench. And the Spurs still have Greg Popovich, who is probably the best coach in the NBA.

The Spurs offense runs extremely efficiently in the ways you’d expect. SAS moves the ball well in Popovich’s offense, and have the League’s best assist ratio at 16.8 to show for it, even though their point guard, Tony Parker, ranks only 17th in the NBA in assists per game, averaging 6.1 per. Their  56.8 TS% ranks third in the League, behind only Miami (59.7) and Houston (57.5), and their EFG% ranks second.

On the Wolves side, offensive execution has been spotty. Ricky Rubio gets a lot of assists, ranking fourth in the League at 8.4 but the Wolves rank twelfth in assist rate. The disparities between the Spurs and Wolves are even greater when looking at TS% and eFG%, where the Wolves rank 21st and 26th, respectively. (Eds. Note: The only teams the Wolves eFG% ranks ahead of are Cleveland, Milwaukee, Chicago, and Charlotte. Yuck).

A few notes on matchups are worth jotting down.

Rubio will have his hands full with Parker. Parker’s floater is the most deadly in the League, and Ricky needs to resist the temptation to overplay the passing lanes and focus instead on position defense. Specifically, Ricky needs to stay in front of TP, else the extremely quick Parker will be in the lane, converting floaters, all night long.

Under no circumstances should Rick Adelman get cute and task Corey Brewer with guarding TP.  (Eds. Note: PDW still has PTSD from the last time that was tried, when Parker torched the Wolves for 55 while mostly on Brewer’s watch.)

Here what it looked like when Parker went off.

Tiago Splitter has missed the Spurs previous two games, but is expected to return tonight against the Wolves. Splitter is an important cog in Popovich’s machine. Notably, he is an outstanding defender, with the best defensive rating out of any player in the league who averages over 20 minutes per game, with 86.9 points allowed per 100 possessions. (Eds. Note: Spurs guard Danny Green has the second-best defensive rating in the League.)

The Wolves will have to try to get Splitter into early foul trouble, or hope he’s not playing at full strength, if they’re going to be able to exploit Nikola Pekovic on offense while trying to draw Tim Duncan out of the paint to defend Kevin Love’s perimeter jump shot.

Duncan is a matchup problem for the shorter Kevin Love, and Duncan should have no problem getting clean looks on his 14-foot face-up bank shot all night if the Wolves try to defend him with Love.

I would put the stronger, more defensively-agile, Pekovic on Duncan, and let Love grind it out with Splitter under the rim. (Eds. Note: It’s in your best interest to read Britt Robson’s great MinnPost feature on Pek, which was just published this morning.)

That’s it for now. Enjoy the tilt.

Comments Off on Timberwolves vs. Spurs: What to Watch For