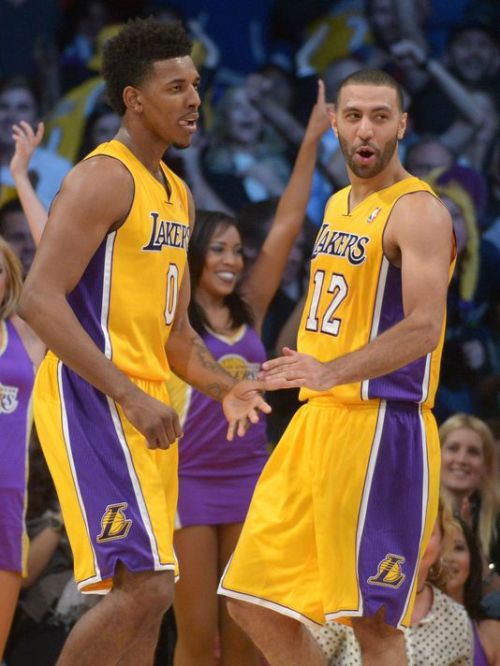 Nick “Swaggy P” Young and Kendall Marshall will be in Minneapolis tonight to take on the Wolves.

Look again, that IS NOT Steve Blake on the right. That’s the red hot Kendall Marshall, who’ll be manning the point for Los Angeles tonight in Minneapolis.

That’s right – the Lakers are in Minneapolis to play the Timberwolves tonight. Tip is at 7 P.M. CST.  Most of you can see the game on FSN. If you’re not local, you can see it on League Pass. If you prefer to listen, tune in to WCCO 830.

A quick rundown of things to look for is below the fold.

END_OF_DOCUMENT_TOKEN_TO_BE_REPLACED

Swaggy P is gonna ball ’til he falls

But Nick Young is not Kobe Bryant. He has more in common with Jordan Crawford and other NBA gunners, and former Philippine first lady Imelda Marcos. (It’s the shoes).

Imelda Marcos and her kicks

Swaggy P and his kicks

END_OF_DOCUMENT_TOKEN_TO_BE_REPLACED

Comments Off on INTEL REPORT: Wolves at Lakers (The Swaggy P Edition)

The story of last night’s game is best begun with a picture.  From espn.com:

In the first quarter, the Lakers curve is pretty much a straight 45 degree line.  Everything they put up went in.  They scored 37 points (13 from Pau Gasol) and led by 13.

In the early part of the 2nd Quarter, the Lakers inexplicably got even hotter.  Their curve spikes upward at a point when Wolves fans at Target Center were desperate for some regression to the mean.  They made 7 of their first 8 field goal attempts to open the 2nd Quarter.  4 of those were 3-pointers.  With 6 minutes to play in the first half, the Lakers held a 61-32, 29-point, almost-doubling-up-the-opposition lead.

On the graph, you notice two things begin midway through the 2nd Quarter: One, the Lakers curve flattens out.  Finally.  Two, the Wolves gets steeper, after a sluggish start to the 2nd Quarter.  Their shots — including some much-needed three-pointers — began to fall.  The Wolves closed the first half on a 21-7 run, cutting the halftime deficit to a troubling but not insurmountable 15 points.  Ricky Rubio was key to that stretch, blending his usual feisty defense with some scoring (2 nifty layups, 1 dribble jumper) and capping off a fun stretch with a behind-the-back dime to D-Thrill for a huge dunk.

Things got even closer in the 2nd Half, after Adelman committed to a zone defense that gave the Lakers fits.  Until they realized how Pau Gasol was born to be the hub of a zone offense, that is.  Once Pau started filling the gaps, and his teammates started hitting him in playmaking spots, the Wolves struggled to defend.  But they did cut it to 4 midway through the 4th Quarter, which is an admirable comeback attempt from the 29-point deficit earlier in the game.  Moral victories and all that.

END_OF_DOCUMENT_TOKEN_TO_BE_REPLACED

Orlando Trades Dwight: Did they get enough in return?

In case ya hadn’t heard, Dwight Howard is headed to Tinseltown.  He joins Wilt Chamberlain, Kareem Abdul-Jabbar, and Shaquille O’Neal on the list of superstar centers acquired by the Lakers in the middle of their prime.  A player as dominant as Dwight Howard, in a league devoid of great centers, certainly has a high trade value.  (Sixth highest in the NBA according to Bill Simmons, back in March.)  Orlando must’ve gotten a haul in return for Dwight… Right? END_OF_DOCUMENT_TOKEN_TO_BE_REPLACED

Free Agency (sort of began) at midnight on Saturday night.  That’s when teams could contact free agents to discuss possible contracts and, in some cases, come to verbal agreements.  Only, the actual pen-on-paper agreement cannot be finalized until July 11, still eight days away (if you’re reading this on Tuesday.)  While we wait for that big day, and the proverbial dominos to fall, we’re left reading the latest updates about who is joining David Kahn to what Twins game and following whatever blockbuster trades break across the news wire when you least expect.  END_OF_DOCUMENT_TOKEN_TO_BE_REPLACED 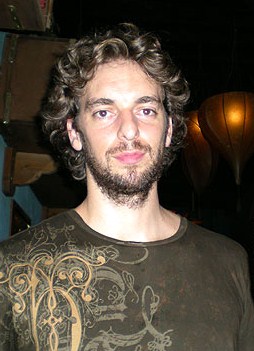 RUMINT has it that the Lakers would throw in Pau's Ed Hardy shirt for a conditional second-rounder, which Kahn demanded as a part of any trade

Patrick J: With all rumors swirling around Pau Gasol, the only thing for a hard-up blogger to do is fire up the good ol’ trade machine.

In this two-team trade, the Wolves’ lineup would look something like:

The Wolves end up with a Pau, Ricky, K-Love core. Barea and Webster are arguably upgrades over Johnson and Ridnour as starters at the 2 & 3. Pek is a matchup nightmare against opposing teams’ second units. We still have one high-upside enigma with Anthony Randolph. (One’s enough, right?)

A common sense question is whether the Wolves would be competitive in a Pau Sweepstakes.

John Hollinger’s (Insider) column suggests the answer may be no:

“It’s not hard coming up with dance partners, that’s for sure. Send him to Houston for Luis Scola,Goran Dragic, Marcus Morris and Chase Budinger, and the Lakers suddenly fill four rotation spots with one deal while saving several million on luxury tax; deal him to Indiana for David West,George Hill and Dahntay Jones and you accomplish a similar feat. These aren’t the only possibilities; one can build similar trades with several other teams, ones that don’t bring back a talent on Gasol’s level but plug so many gaps that it may be worth it anyway.”

Can a Williams/Beasley/Ridnour/Johnson package compete with Scola/Dragic/Morris/Budinger or West/Hill/Jones? We know the Rockets really want Gasol, and that’d be a pretty strong offer. What do you think?

END_OF_DOCUMENT_TOKEN_TO_BE_REPLACED

So, I just discovered Wolves Rubes, a new Timberwolves site that already has some interesting content up, like this post breaking down Pau Gasol trade rumors.

Check them out over at http://wolvesrubes.blogspot.com/

Comments Off on New Wolves Site