END_OF_DOCUMENT_TOKEN_TO_BE_REPLACED

Timberwolves vs. Mavericks: Making It Rain in Big D 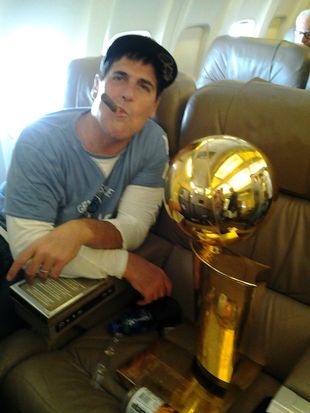 Mark Cuban on making it rain: “That’s dumb shit that people with real money dont do.” He better hope Dirk and OJ didn’t get the memo…

Mark Cuban can make it rain. But does he? (No, he says. Read here why.) Can the Wolves make it rain tonight in Dallas? What about Juice and Dirk? Am I mixing metaphors? Could you tell if I weren’t? (RHETORICAL!)

Okay, so the Wolves take on the Mavs in Dallas Monday evening after suffering an exhausting, frustrating loss last night in San Antonio. Dallas (15-23) recently fell to 10 games under .500 for the first time in 13 years last week. But Big D has since begun to pick up the slack. Dirk & co picked up a 117-112 overtime win at Sacramento, and followed it up by destroying Western Conference Contender Memphis Grizzlies 104-83 on Saturday. Dirk is coming back to form, just as the Wolves are settling into a Love-less reality.

Which Mavs team will show up tonight? Who knows? But it does look like the Wolves are catching Dallas on an upswing, not the downswing they were on a few weeks ago. Meanwhile, the Wolves are in the midst of a fairly horrible downswing of their own. So, for the sake of argument, let’s say that “momentum” – whatever that is – is in Dallas’ favor.

What’s wrong with the Wolves? Injuries, coaching, and shooting, for starters. More below the fold.

END_OF_DOCUMENT_TOKEN_TO_BE_REPLACED

Comments Off on Timberwolves vs. Mavericks: Making It Rain in Big D

The Jazz and Mavs will compete with the Wolves for a playoff spot.

Marc Stein has released his first Power Rankings of the 2012-13 season.  A quick scan down to the middle teams shows support for something that I have been thinking to be true about this Western Conference playoff landscape: There will be four teams fighting for two playoff spots.  They are the Dallas Mavericks, Utah Jazz, Golden State Warriors and, yes, our very own Minnesota Timberwolves.  If you follow Stein’s writing, you know that he loves Dallas and, like many others in the NBA media, quickly took to the Rubio-led Timberwolves of 2012.  It comes as no surprise then, that he has them ranked slightly ahead of Utah and Golden State.  Stein ranks the Wolves 14th–8th best in the West.  He has Utah and Golden State ranked 16th/9th and 17th/10th respectively.  He has Dallas ranked 10th overall, 6th in the West, ahead of Memphis, which he ranks 11th/7th.  His Dallas bias got the best of him there.  While the Mavs could surprise and do well in a Post-Jet & Chandler World, there’s no reason to expect them to finish ahead of the Grizzlies.

Why only two spots? END_OF_DOCUMENT_TOKEN_TO_BE_REPLACED

Kevin Love joined elite company on Saturday Night by winning the Foot Locker Three-Point Shootout.  Past winners include Larry Bird (3) Peja Stojakovich (2) Glen Rice, Mark Price, Ray Allen, Dirk Nowitzki, and Paul Pierce (and other lesser-known snipers).  Announcing the event for TNT were Kevin Harlan, Reggie Miller, Shaq, and Charles Barkley.  Chuck continues to pump K-Love’s tire with the “best power forward in the NBA” flattery, but mentioned more than once that he doesn’t want Kevin to fall in love with the three-point shot.  He thinks he needs to do his work from 15 feet and in.  Reggie seemed to disagree; perhaps a natural reaction from a player whose teams won many a playoff series behind his long-range gunning.

I fall squarely in Reggie’s camp on this one.  Love’s perimeter shooting is a huge strength that helps the team by spacing the floor, capitalizing on Rubio passes, and–perhaps most importantly–taking Love away from the basket, where Nikola Pekovic is proving to be the more-effective option.  Love is currently shooting 4.0 threes per 36 minutes, a career-high for him.  For some perspective, here are past three-point champs and their career average for number of 3’s attempted per 36:

Okay, now that I’ve made that list, a few additional thoughts:

* 4.0 is higher than I anticipated among the former champs.  These are career averages though, and some of these guys had higher 3PA/36 during their prime years.  Love is probably now in his prime.

* Some of these players were role players next to superstars–guys like Kerr, Hodges, and Legler were not given the ball very much, so low shooting frequency makes sense.  For Love, this isn’t an issue.

* I don’t think Love–to this point–gets hounded around the perimeter like star shooters such as Allen and Peja.  I think he could afford to shoot an extra 3 or two each game without forcing it.

Anyway, great representation of the Wolves tonight between Love’s title and one pretty amazing dunk by Williams, with help from Rubio.  The team is certainly on the national radar now, and All-Star Weekend bears that out.

As you probably know, the Wolves have twice defeated the defending-champion Mavericks in this short season, each game by a decided margin of victory.  Although I joined the excitement of other Wolves fans about last year’s worst dominating last year’s best, it was impossible not to notice two things about those games:

1) In the first game, Dirk wasn’t Dirk (as Bill Simmons explained yesterday, Dirk showed up for training camp way out of shape, not yet recovering from the championship hangover).

2) In the second game, Dirk wasn’t playing.  (His legs were broken down from playing his way into shape, for the above reason.)

Last night’s game would include neither of those beneficial factors.  After beginning the season 3-5, Dallas had won 12 of its last 18 games, returning to contender form.  After his worst start to a season in over a decade, Dirk had finally caught fire.  In the three games leading up to last night’s, Dirk was averaging over 26 points per game on 61.5 percent shooting.  It appeared as though he’d be the matchup nightmare that fans have grown accustomed to watching.

END_OF_DOCUMENT_TOKEN_TO_BE_REPLACED

Comments Off on The Return of Dirk (Mavericks 104, WOLVES 97)

After penning his name on a gigantic four-year contract extension (approximately $62 Million over 4 years, with player option after third year) Kevin Love went out and played a near-perfect game of basketball against the defending champion Dallas Mavericks.  Spearheading a dominant second half for his team (53-36) Love posted 31 points, 10 rebounds, 2 assists, 2 steals, and 2 blocks without any of the disruptive, gimmicky tactics that I whined so much about the other night.  Love shot 6 treys and hit 4 of them, he played hard defense all over the floor (not his type of matchup when Yi draws him outside the paint) and provided the uber-efficient productivity that makes him special.  One game in, Love looks well-worth the dough.

Beating Dallas at its home court is a bit less (okay, WAY LESS) impressive when Dirk is on the sidelines with a knee injury.  The Mavs started this game with some red-hot shooting, particularly from Jasons Kidd and Terry, Yi Jianlian, and Rodrique Beaubois.  I wondered whether the Wolves (shorthanded themselves without Ridnour, Barea, Beasley, Webster, Miller, and Lee) would have enough legs to ramp up the defensive pressure and hang in this game.

They did.  Rubio in particular was relentless in attacking the defense, staving off defensive pressure, and constantly seeking out steal opportunities (4 times successfully) for 46 crucial minutes of point guard play.  Only for a short two-minute stint of Wayne at the point did Ricky get a breather.

My one problem with Rubio’s game (no, not his 7 turnovers; those are part of the package for this type of playmaker) is that he shot too much.  His jumper is quickly molding into its Euro League form, with his field goal percentage now plummeted to 38.6.  He shot 4 of 16 from the floor, tonight.  On too many possessions, Rubio’s first decision was to penetrate the lane and look for his own shot.  It wasn’t working for him tonight.  His overall efficiency (17 points on 16 shots) was partially saved by an ability to draw fouls (8-9 FT’s) that is second only to Love on this team.  Ricky stuffed the stat sheet with 17 points, 12 assists, 7 rebounds, and 4 steals.  Triple doubles are in this kid’s future.

A road win is a good win, especially with the Spurs and Lakers on the horizon.  Additional jottings:

* I lobbied for Anthony Randolph to take the center minutes from Darko and Pekovic.  Rick Adelman disagrees, obviously, because Randolph played 9 minutes tonight, while Darko and Pek combined for 44.  Darko had an efficient 8 points, 7 rebounds and a whopping 7 blocks in 24 minutes.  Pekovic shot 4 for 5, for 13 points and 7 rebounds in 20 minutes.  Randolph?  The only Wolf in the minus column (-5) with a 1 for 4 shooting night.  Perhaps Coach knows what he’s doing.

* Lamar Odom looks horrible.  He is notoriously inconsistent, but tonight looked cranky, out of shape, and not at all ready for an NBA basketball game.  As he has done throughout his career, he took the bait on jump shot opportunities, and put together a 2 for 14 shooting performance in just 16 minutes of action.  Mavs fans must miss them some Tyson Chandler.

* Solid game for Derrick Williams.  He is not a small forward–that much should be obvious by now–but on plays when Rubio was cycling the half court with the ball, D-Thrill found opportunities to dive in the paint.  He was rewarded with Rubio passes and easy hoops were had.  On one instance, it was Rubio-to-Williams-to-Darko without the ball touching the floor.  On another, Williams finished it off himself.  10 points (4-7 shooting), 6 rebounds, 2 assists, and 0 turnovers in 25 minutes is good work for a rookie playing out of position.