A Look at the 2014 NBA Slam Dunk Contest Participants

John Wall gets high. Will he win the 2014 Slam-Dunk Contest?

It was announced today that the 2014 Slam Dunk Contest participants will include Paul George, Damian Lillard, John Wall, and defending champion Terrence Ross, according to ESPN. Ben McLemore and Harrison Barnes are mentioned as the two others who are expected to round out the six-man field.

All are firmly in BMF territory as dunkers. But who’s the best?

The point of this post isn’t to pontificate about who’s the best dunker. That’s a matter of personal aesthetic preference: The dunk, like other special types of basketball shots, is more an art than a science.

That said, it’s fun to see what each participant has in his arsenal – and then to watch the contest to see if they have anything new up their sleeves.

Without further ado, here’s a video compilation of each participant. Enjoy.

END_OF_DOCUMENT_TOKEN_TO_BE_REPLACED

The Wolves have not won a game in Salt Lake City since 2009.

After rolling over the Utah Jazz (14-28) 98-72 at home on Saturday, the Timberwolves (19-21) are in Salt Lake City to take on the Jazz in the second game of a rare home-and-home involving the Wolves.

On Friday, everything that could’ve gone right did. They got off to a 9-0 start, and led by as many as 36 at one point. Nikola Pekovic carved up Derrick Favors, Enes Kanter, and any other challengers on Utah’s front line en route to 27 points and a season-high 14 rebounds in just 29 minutes; Good Kevin Martin came to play, tallying 20 points; and Kevin Love had 18 and 13, totals that would’ve been higher had the Wolves needed him to play more minutes. (He played 29.)

On the Jazz side, what was already arguably the worst team in the NBA was without its best player, Gordon Hayward, and the team had a historically-bad shooting night, going a franchise-worst 28.8 percent (21 of 73). With 18 points, Alec Burks was the lone Jazz player in double-figures. For one night at least, the Wolves quieted some of the naysayers who’ve loudly criticized their decision not to select Trey Burke with the ninth pick in last summer’s draft. Ricky Rubio clearly outclassed Burke on Saturday night, holding the rookie to 9 points–almost five below his season average–on 2-10 from the field and two assists. Burke also had three turnovers.

Tonight’s game in Utah figures to be a more difficult win for the Wolves than was Saturday’s laugher for two reasons: Gordon Hayward and EnergySolutions Arena.

END_OF_DOCUMENT_TOKEN_TO_BE_REPLACED

Why the Wolves Will Struggle against the Pacers

Hi Folks, I’ve been traveling for the last week, unable to post but catching Wolves basketball on my laptop when I could.

Lots of ups and downs, from the disappointment of the four-point loss in Washington to letting off some steam against KG & the Brooklyn Nyets to a disappointing 112-101 loss at Houston on Saturday night against a Rockets team that was down one James Harden.

The inconsistent play is more a function of stretches of bad Wolves basketball than it is of running into the wrong team at the wrong time. The Wolves struggle to take and keep leads, as was particularly evident in the loss to Washington, with the exception being when they get out to giant first-half leads, which won’t be the case very often against the kinds of teams we’ll need to beat if we make the playoffs.

One team the Wolves are unlikely to get out to a big lead against is the Indiana Pacers, who host them tonight at  Bankers Life Fieldhouse at 7 P.M. Eastern. You can see the game on League Pass.

The 12-1 Pacers are undefeated at  Bankers Life  this season, and are 19-4 all-time when playing ‘Sota in their gym. The Pacers have two of the best defenders in the NBA in Paul George and Roy Hibbert. With his canny feel for the game and his long arms, George guards the wing like a young Scottie Pippen. Roy Hibbert leads the NBA in blocked shots and is the kind of rim protector Wolves fans dream Gorgui Dieng might someday become. Collectively, the Pacers currently allow the fewest points per game of any team in the NBA at 87.6 and hold opponents to a stingy 39.7 field goal percentage.

A sign that everything is clicking in Indiana? Things are so good in Indiana right now that respected columnists have begun to wonder whether the Pacers will be able to afford Lance Stephenson, formerly the punchline of so many sordid jokes.

END_OF_DOCUMENT_TOKEN_TO_BE_REPLACED

INBOX: Riding High After A Win (And What’s To Come: The Indiana Pacers Edition)

David defeated Goliath last night. Goliath wasn’t at full strength. It was down 3 of its 4 best players.

But that doesn’t really matter right now. Not for the Wolves. It was a good day.

That GIF says a 1,000 words. Rubio was great. He f*cked around and got a triple-double. Ice Cube would’ve been proud. Punch-Drunk Wolves sure was.

Tonight, the Wolves play Indiana. They’re real good. Real good. And unlike the Spurs, Indy isn’t sitting three of their top players. Frank Vogel would be happy to eat your heart and mine.

What to know about the Pacers game tonight? Andy G and I break down a few key factors in this INBOX post.

END_OF_DOCUMENT_TOKEN_TO_BE_REPLACED

Comments Off on INBOX: Riding High After A Win (And What’s To Come: The Indiana Pacers Edition)

Paul George is a baller

Illustration by Howard Shum. Go check it out.

We’ve raved before about George’s underrated defensive prowess, but it’s worth reiterating: George can defend the hell out of the ball. George has those extremely long arms, that effortless footwork, and excellent positioning that, on a good day, might remind you of Scottie Pippen.

The Wolves will have to contend with George tonight, when the Wolves take on the Pacers at Target Center at 7 PM. But  they won’t just have to plan for George’s disruptive defense…

END_OF_DOCUMENT_TOKEN_TO_BE_REPLACED 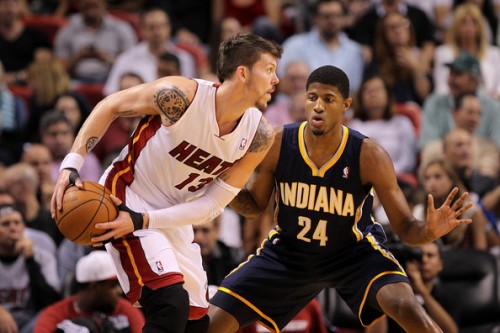 Andy G and I are doing a series on players you’ll be watching for one reason or another this season on League Pass. Check out the first three entries below.

This installment is a REACTION to Andy G’s All-League Pass Eastern Conference 1st team. It was an interesting list that suggested food for thought.

One. What to do about good players on bad teams. I don’t mean teams that are so bad they’re good. I mean the Pistons. END_OF_DOCUMENT_TOKEN_TO_BE_REPLACED

Patrick J and I are doing a series on players you’ll be watching for one reason or another this season on League Pass.

Timberwolves fans are naturally less familiar with Eastern Conference teams and players.  This is one reason of many why League Pass is a worthwhile purchase and use of time.  The following is my ALL-LEAGUE PASS TEAM, Eastern Conference style.  Oh, and remember the discussion surrounding Rookie Blake Griffin’s eligibility for both the Rookie Game and the regular All-Star Game?  At Punch-Drunk Wolves, rookies only get one team — so the rookies Pat described here and here are INELIGIBLE.

G – John Wall, Washington Wizards: For the same reason you enjoy 100 meters of Usain Bolt, you should also enjoy 48 minutes of John Wall.  The dude is just stupid fast.  His shooting is a problem — a big one — but that hasn’t prevented Rajon Rondo and other point guards from doing good things.  The ‘Zards have expunged some of the cancer that plagued recent seasons and the development of Wall; they traded Nick Young and let Andray Blatche take his talents elsewhere.  Now that Wall can team with legit NBA talent (Nene, Okafor, Bradley Beal) the hope for League Pass aficionados is that Wall’s game will develop accordingly.  His athleticism is breathtaking and we’d all benefit from getting to watch more of this guy in big games. END_OF_DOCUMENT_TOKEN_TO_BE_REPLACED

I decided to rank the dunkers, based on how well I expect them to do in the contest (that is, NOT on their in-game dunking ability). My list is below the fold.

END_OF_DOCUMENT_TOKEN_TO_BE_REPLACED

So, the Wolves lost last night to the Pacers 109-99 (box score). What did we learn? For one thing, the Pacers are good. Really good. Maybe the 3rd best team in the East, depending on what you think about the Sixers, Hawks, and Magic. A lot of words have been typed about the Sixers resurgence, and while they’re playing great, I like Indiana better from top to bottom. They don’t have a lot of weaknesses, they play hard, and their pieces fit together nicely. They were 14-6 coming into last night’s game, but the buzz around the game made it feel like the Wolves should be the favorite. The bad loss was a painful reality check that should  remind the Wolves that progress does not a good team make.

* The Wolves throw away minutes when they start Wes and Darko. Both started; each played 18 minutes.  Wes went 2-6 with 2 turnovers and a (-12). Darko was 2-9 with 2 turnovers and a (-15).  Yes, +/- is a slippery metric for single-game performance. But look at their season stats. They’re entirely consistent with both the horrendous efforts we saw last night and what we’ve seen with our own eyes all season. Adelman must see it too, right? A combined 4 for 15 with 4 turnovers and (-27) is hardly an uncommon line for these two. Playing either of them, let alone both, is really hurting the team.

* More Wes/Darko: It’s even more frustrating and confounding that they got those minutes last night since Adelman had a fuller squad at his disposal. I get that Hibbert and Granger/George look like matchup problems for Pek/AR and Beasley/Williams, respectively. But all three of those Pacers pretty much did what they want against Darko and Wes. Why not counter with Williams and Beasley and initiate matchup problems for IND? Last night was a tactical #fail for Adelman, his first and hopefully last of the season.

* Speaking of Paul George: He MIGHT be better than Wes. PG ended up in foul trouble, but when he was out there… whoa. He did it all. For starters, he defended Rubio as well as anyone this season; he also hit an impressive variety of shots, going 4-6 on fadeaways, threes, drives, etc. You name it, it’s in George’s arsenal. But that’s not all: George rebounds and can block shots too. For the night, he was +14 in just 19 minutes of action.

* The Pacers: I don’t want this to turn into a “__________ are so good” sort of discussion that was so common the last few seasons, when every Wolves drumming left us feeling like our opponent was just THAT GOOD… but as I said at the top of the post, the Pacers are pretty damn good. Granger won’t always light it up on this scale–he went for 36–but his 9-19 shooting wasn’t way outside his norm either.  Granger made some perimeter shots, carved up the Wolves D, and drew all kinds of fouls in the process.

* The Pacers got momentum after Granger picked up a tech in the third for a pushing match with Love.  The two took it outside, 21st century style–which of course involves Twitter. Love dissed Indy in the post-game interviews, and Danny took it to Twitter. They may be questioning each other’s MASCULINITY through SMS as I write this.

* Roy Hibbert: He’s really good. Hibbert scored easily on Darko (6-9 for 15 points) and showed off a variety of nice moves with his back to the basket. For a 7’2″ player, Hibbert has good footwork and surprising athleticism.  In a league largely devoid of star post players, Hibbert could make an All-Star team before he’s done.

What were your takeaways from this one?