Timberwolves training camp opens on Monday with their annual Media Day. Once the players and coaches are on the floor, doing actual basketball stuff, we’ll be better equipped to carry on substantive Wolves discussion. Meanwhile, there are a couple of team issues and one gambling-related Wolves item to kick around in these final dog days of NBA offseason.

Andy G: Vegas released its NBA over/unders. That’s always a fun and interesting wrinkle to the “gearing up for the season” #process.

Let’s cut to the chase:

The gamblers set the Wolves at 41.5 wins.

They won 15 the season before that.

Is picking 42 or more wins a crazy proposition?

Patrick J: I don’t think so. (Eds. Note: Patrick J has been over-optimistic about the Wolves’ W-L prospects for N offseasons. Buyer beware.) Look, the Wolves got WAY better this offseason simply by subtracting Sam Mitchell’s stank-leg offense and adding Thom Thibodeau (Eds. Note: New spelling, for symmetry) to replace him. Instead of a mediocre-at-best coach, we’ll have one of the very best–and one who consistently grinds more wins out of his teams in the regular season than seems likely, ex-ante. The Wolves will win more games this season because Thibs. Now, combine that with the anticipated improvement from up-and-coming stars Karl Towns and Andrew Wiggins (and possibly Zach LaVine) and the always-steady (when healthy) Ricky Rubio, and the Wolves should have a good shot at at least 42 wins.

Andy G: Last year, we were calling for Thibs to become Wolves boss long before it actually happened. I’m sure we weren’t the only ones. It wasn’t any sort of “brilliant” take. He’s one of the top basketball coaches on the planet (and most importantly, he was the best “unemployed” coach) and most people realized this.

That’s a reason to expect improvement. I’m not as down on Smitch’s coaching as you are — I think he might’ve been “the right guy” for last year’s stage of development — but Smith-to-Thibs is a clear upgrade.

I said to more than a couple friends last year that, “If the Wolves get Thibs I’m predicting 50 wins.”

Part of that anticipatory prediction was the added-in expectation that Thibs would reshape the roster to more of a “win-now” model. He doesn’t sound like the develop-talent, #TrustTheProcess sort. The rumored Jimmy Butler trade talks on draft night were the sort of thing that would materialize. Or something where they sign Luol Deng. Or something splashier like a trade for Boogie Cousins. Something where one of the raw young guys (probably LaVine) goes out, and a more established veteran comes in.

None of those things happened, however, and the “big name” acquisitions were Cole Aldrich and Jordan Hill in free agency, and Khris Dunn in the draft.

What does this mean?

It means that the Wolves will be starting at least one 21-year old and possibly two of them (Wiggins for sure, possibly LaVine) and a 20-year old. Granted, these are three of the most gifted young players in the entire league, but all of them would still be in college in an older era of basketball. It’s hard to win a lot of games with a core group of players in such an early stage of development.

Whether I’m willing to stick to my 50-win guns is something I’ll wrestle with in the lead-up to more all-encompassing “Wolves Preview” material, shortly before the regular season starts, but since that’s way beyond 41.5, I think I’m safely in the “over” camp, regardless.

The big variable, as always, is the point guard position. Keeping Rubio healthy and finding a backup who doesn’t tank away games will be the key variables in winning more than half of the games.

.@BloodStrib & I had 7am meeting w/ Thibs. 2 takeaways: KG future being handled by owner GT & he actually smiled when asked about Bjelica

Patrick J: It’s very interesting that the KG situation is being handled personally by Glen Taylor. I don’t think either of us (or anybody else) can see Garnett playing in more than half of the games in 2016-17 or logging more than 15 minutes per game in the games he’s healthy enough to play in. As much as the team is better during those minutes than it is with a replacement, expecting any meaningful on-court contribution from Garnett this season seems UNSUSTAINABLE!

KG’s next presser could be announcing his retirement

So, what to do? Zgoda’s tweet is interesting, and suggests a few possibilities. The fact that Thibs isn’t involved, and doesn’t seem interested in having KG back this year, might mean that one possibility is that he recused his self (and GM Scott Layden) from discussions with KG about his future, with the expectation that Taylor can cut a deal with KG in which everyone gets something they want:It has long been rumored that KG could assume an ownership position after his playing days are over. Taylor obviously has the leverage here, as he could offer a sweetener to Garnett if he doesn’t play this season, or dictate terms less attractive to Garnett if the new regime sees his refusal to retire as an obstacle to the rebuilding effort Taylor has already invested so much in. Personally, I would like to know how much coordination there is right now between Thibodeau/Layden and Taylor regarding Taylor’s negotiations with Garnett. If the answer is “none,” it would be more of the same “inside baseball” we’ve seen in the past but now appear to have escaped. Overall, it would be a very negative indicator of the probability the team will work out a constructive resolution with KG that’s good for the team and not just KG.

Andy G: From a pure intrigue standpoint, it’s more fun when KG is around. He’s such a dynamic presence and forceful personality, and also happens to be the only legendary player in franchise history. It’s a more interesting basketball team with Kevin Garnett than it is without him.

But as Christian Bale might say whilst unloading on a set crew, it’s uh, quite distracting to have KG hanging around under these circumstances. He can’t play very many games, or many minutes in the games that he does play, and yet it seems like he has a right — earned, I should add — to be the starting power forward whenever he wants. Also, it shouldn’t be ignored that KG has been very close with Sam Mitchell since the mid-1990s when he first joined the team as a rookie, and he may or may not be upset over how this recent coaching transition was handled.

(Obligatory Eds Note, since it’s been a while: KORN FERRY!!!)

I’d like to have a set starting five for every game, to the extent possible. I’d like to have Tom Thibodeau’s voice be the only one in the locker room that matters, this season. Both of those seem more likely to be the case with KG somewhere else.

Patrick J: Agreed. (Eds. Note: Patrick J will see your iconic Bale audio and raise you the even more iconic “Bale Out” remix. NSFW, depending where you W.)

Thibs also said Pek won't be ready to participate in camp, didn't get any impression he's expecting anything from Pek going forth.

Patrick J: Godfather Pekovic isn’t walking through that door, unfortunately. Period. What’s more, there’s very little that can be done about his kahntract, and the unfortunate sub-optimal equilibrium that we have is a waiting game–Pek waits out the Wolves, collecting checks whilst wearing fly suits and instilling fear in the team’s opponents and small children from the sidelines; the Wolves patiently wait a better opportunity to unload Pek’s kahntract, if that becomes a possibility, or for a chance to buy him out.

The good news is that the Wolves have been playing without a healthy Pekovic for more than a year, so this season’s situation is really more of a mere annoyance than a liability that will catch the team in flat-footed surprise in the middle of the season. They will have stalwart big Gorgui Dieng back. And they will have newcomer and Hometown Hero Cole Aldrich, who should do some “Pek-like things,” not the least of which will be playing the role of a very large human being. 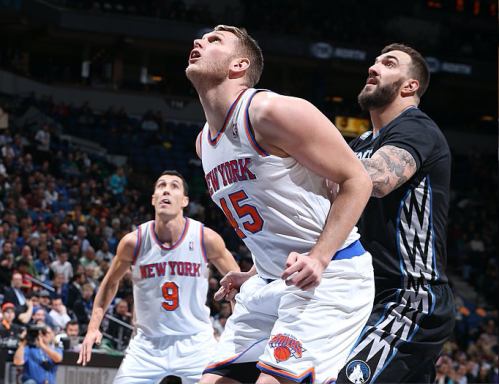 The bad news is that beyond KAT, it’s difficult to be particularly excited about the Wolves’ frontcourt. In the case of newcomer Aldrich, he is fundamentally-sound filler for the time being. While he has improved during his time in the League, he’s no Godfather Pekovic. The two have different styles, and Pek was much better at his peak than Aldrich ever has been or will be. Even in a league that is constantly getting smaller, the Wolves lack of frontcourt depth last year was strikingly apparent. Aldrich should be a nice, functional player who does his job and provides the necessary depth for the team to compete against biggish frontcourts, but losing Pekovic to a career-ending injury is likely to sting for a while unless the Wolves manage a trade for BOOOOGIE! Cousins.

Even though we might never see Pek in a Twolves uniform again, pictures are worth a thousand words. Here’s the Pek we know and love in the ALS Ice Bucket Challenge of an unspecified year.