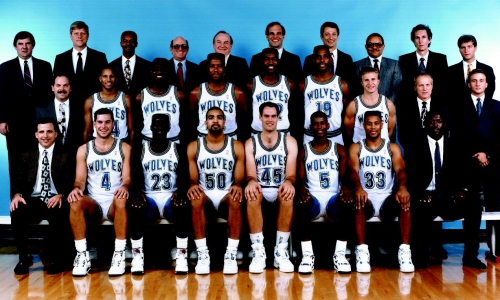 Once upon a time, Tom Thibodeau, Sam Mitchell, and Scott Brooks were all members of the Timberwolves organization.

Patrick J: BREAKING: SAM MITCHELL WILL NOT BE RETURNING AS THE TIMBERWOLVES COACH IN 2016-17. Last week, you made the case for the Wolves to bring back Smitch for another season. But roughly one hour after the team’s final game – a 144-109 EVISCERATION of the Unibrow-less New Orleans Pelicans – the Wolves fired Mitchell (de facto) and announced that they’re teaming with an independent firm that specializes in “searches” to fill the coaching vacancy. As a Smitch defender – or at least an expemplar devil’s advocate of his – do you think Glen Taylor has made a bad decision?

Andy G: I’ll give you my answer to most questions:

If KORN FERRY (the hiring firm) brings us Tom Thibodeau, then I’m all for the change. Thibs is on the short list with Popovich, [Stan] Van Gundy, and Rick Carlisle of the world’s best coaches. If you can get Thibs, you hire him and replace whoever you’ve got — as long as it’s not somebody else on that short list, of course.

As I’ve said many times, in different ways, Sam’s situation with the Wolves improved over the past couple months from, “He’s gotta go,” to “It depends on who replaces him.” That’s how I feel right now. Sam had the Wolves moving in a clear, positive direction in the final stage of the 2015-16 season, and there was every reason to expect more improvement with him as coach next year. Whether Sam deserved the job is less important than the fact that he had the job all season, and he had things going the way people should have wanted them going.

Any change will initially need to bring some level of extra credibility (Thibs) or excitement (Tom Izzo) for fans to feel a sense of positivity about the change. (Eds note: I don’t want Izzo or any other NCAA coach. But a lot of Minnesota-sports fans would love that.) If they instead hire Hoiberg away from the Bulls or Joerger away from the Grizzlies, I don’t see how there’s been a meaningful change.

After the initial announcement and rationalization for New Coach over Sam Mitchell, New Coach needs to prove it on the floor. Next year, that probably means a playoff berth, given the strength of this roster and how this team was playing at season’s end. (This also assumes some roster improvement in the frontcourt and backup guard slots.)

Give Taylor credit for making this decision immediately, though. I very much feared that this would drag out, which would not only cost the Wolves potential opportunities at marquee candidates, but could also jeopardize their draft and offseason preparation.

What did you think of the announcement?

Patrick J: KORN FERRY! (Eds. Note: Patrick J embraces the notion of hiring an “independent” firm with expertise in supporting targeted job searches, but he would have more confidence in a firm not named Korn Ferry.)

The announcement took me by surprise. After the Obama administration, few regimes have been more accused of “dithering” than the Timberwolves. Do you remember 2009, when the Wolves hired David Kahn prior to the draft, but neglected to hire a coach until after the draft? Kahn drafted two point guards, Ricky Rubio and Johnny Flynn, with the 5th and 6th picks, respectively. And then the Wolves hired Kurt Rambis and his triangle offense after the draft? It turned out that Rubio wasn’t coming to ‘Sota until the 2011-12 campaign, and Jonny Flynn was not just a bad fit for Rambis’ triangle offense, but a bad NBA player. I’ll go out on a limb here and say that that sequence of events stunted the Wolves’ development, even if we put The Stephen Curry Issue aside.

What I am saying is that I like Taylor’s foresight and aggressiveness in determining that Smitch was not the coach he envisioned leading the uber-talented and uber-young Wolves squad forward, and that I like his willingness to move quickly to excise Smitch from the organization so that it can move on in a timely fashion. Time will tell whether KORN FERRY (Eds. Note: Do I smell a hashtag in the making here? #kornferry) will guide Taylor to a competent and appropriate replacement for Mitchell. We’ll see. The good folks over at Canis Hoopus like to talk a lot about “process.” It’s a long story, and I don’t think process is the be-all or end-all of NBA success – I honestly think “luck” and “chance” has a lot to do with it – but good process > bad process. And I think the announcement – specifically, the timing of it – suggests better/more logical “process” than we’ve seen at other critical junctures of Wolves history.

In a nutshell, I’m elated.

Andy G: Let’s get away from #process and move toward #outcome.

Zgoda listed 5 potential Wolves coaches, including Thibs, Scott Brooks, Jeff Van Gundy, Tom Izzo, and Kevin Ollie. (Sorry, ahem, KEVIN OLLIE!) Let’s also include Dave Joerger and Fred Hoiberg, since each has been rumored as a Wolves candidate in the past and who knows what could happen in the next month.

Rank your preference and throw in a wild card candidate for fun.

Basic reasoning: Thibs is the best tactician, he’s a proven winner, and the Wolves defense would be insane with the core they’ve assembled. Brooks coached the best player development project in NBA history, which included an MVP (Durant) and two other very-serious MVP candidates (Westbrook and Harden).

Brooks gets ripped by some for perceived play-designing and rotations shortcomings, and the extent to which that loses the forest from the trees is hard to put into words. Just look up the Thunder’s record and situation when he began coaching there, and then see how they did after that. (And don’t forget to pay attention to the Harden trade (they somehow got BETTER after that) and all of the major injuries suffered by Westbrook, Ibaka, and Durant, which ultimately led to Brooks’s demise. It’s one of the best coaching performances in league history, from a “Where were we, and where are we now?” perspective. Had their ownership ponied up the cash to pay Harden like most teams would’ve, OR had they not had the injury problems in recent years, they’d likely have a title or three. He’d be great for this Wolves team, which fancies itself an OKC 2.0 of sorts, with the young players that have so much upside.

Joerger has experience, including recent/ongoing winning experience in the NBA. JVG is a proven coach, but I’d question whether at his age and the length of time he spent on TV he would be as committed to this task as the Wolves would need him to be. Hoiberg hasn’t panned out in Chicago. I think he has good ideas, but it’s unclear if he can motivate an NBA locker room. Ollie is a wildcard with no NBA head coaching experience, but he’s known around the league as a respected teammate, and he has won a lot at UConn in college. Izzo is last because he is a college guy, through and through.

My wildcard pick is Patrick Ewing. Everyone knows that Ewing had a great playing career with the Knicks, but not everybody knows that he has been busting his ass for years on NBA benches, working as an involved assistant coach. He wants to be a head coach. He’s worked with and/or Jeff Van Gundy, Stan Van Gundy, Tom Thibodeau, and now Steve Clifford, the highly respected coach of the upstart Charlotte Hornets. He’s Clifford’s top assistant. See this story about it all in the Sporting News.

Wild card: Ollie. (I think he’s an extremely unlikely candidate, despite his impressive bona fides as a player and at the college level.)

I’ve never liked Scott Brooks’ style. His OKC teams were solid, but it’s unclear whether they underperformed or overperformed. They didn’t win a title. And I didn’t like the aesthetics.

Did I say I like Thibs? Give him the keys to the kingdom. Let him be POBO? Would any reasonable fan/Wolves follower feel worse about Thibs getting hired to wear both the coach and the POBO hat than they did when Flip got both wheels?

Andy G: Yes, you let him be POBO, pick his entire staff, give him the biggest corner office at MAYO CLINIC SQUARE, a membership at Interlachen, his own corner booth at Manny’s, and whatever else he wants. It seems we’re in agreement on this, so maybe this is the logical place to stop.

What an eventful 24 hours. I’ll try to get a season in review type of post up this weekend, including 4th Quarter Grades, to finish up that post theme, too.