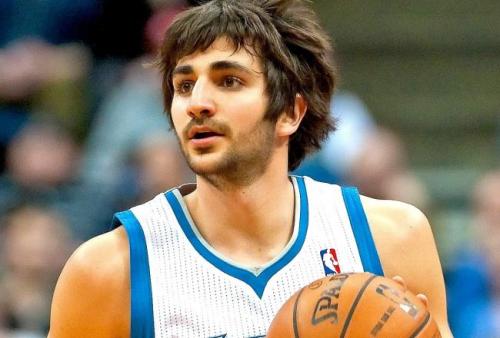 The Wolves played against the Clippers this afternoon at Staples Center. They lost by 8, but nobody felt too bad about the proverbial “moral victory,” because, well…

For the second consecutive game, Ricky Rubio sat out with what is being described as ankle soreness. It is the sixth game he’s missed of this 17-game season. The Wolves are 7-4 with him and now 1-5 without him. The only Rubio-less win came on Friday night against the Kings who did not have DeMarcus Cousins, their only great player. The Wolves cannot realistically compete against good teams without Rubio, so a reasonably-close loss (they beat the spread by 1.5) has to suffice.

On Saturday, Jerry Zgoda of the Star Tribune wrote that Rubio “began to experience that soreness two or three games ago, then jammed the ankle just before halftime in Wednesday’s home win over Atlanta.” According to Darren Wolfson of KSTP — as reliable a Minnesota-sports beat reporter as there is — Rubio wants to play, but is being held out per the decision of others. In both the Hawks and 76ers games — the last two that Rubio has played in — he has looked every bit his usual self, having a noticeably-positive effect on both games, particularly on defense. The only evidence of injury concerns was the wrap he put on his leg during his stints on the bench.

As was the case last season when Rubio was being held out of games that he reportedly wished to play in, he can be seen going through pregame work with assistant coaches, demonstrating no apparent disability; at least not to my untrained eyes in the times I’ve witnessed it. Rubio was described as a “gametime decision” today, but nobody paying attention believed he would play after that much was announced. It feels the same as last year, when his ankle never gets better despite the passing of time.

This leaves us with two general possibilities, and you can decide for yourself which is better or worse, and more or less likely: either Rubio’s ankle has not recovered well from the “diagnostic” surgery that he underwent back in April, over 7 months ago — a procedure described as minor and “clean up” — and he is increasingly unreliable as a healthy starting point guard, or he is able to play but the Timberwolves don’t want him to. The latter sounds like a juicy conspiracy theory, until you consider a few different things.

First, the Wolves used this precise tactic last year with great success, when the franchise goal was to lose games and improve draft position. They sat Rubio out and subbed in the 19-year old shooting guard, Zach LaVine. The rookie had no idea how to play point guard, but he had endless athleticism and general potential as a player. His on-the-job basketball training doubled as effective tanking. Rubio was held out of 60 games due to ankle issues. They were 7-15 in the games in which he played, and 9-51 in the games in which he sat out. The 26-win pace with Rubio would’ve placed the Wolves between Orlando and Sacramento for the 5th worst record in the league, and 5th best odds of winning the lottery. Holding him out led to the lottery win and budding superstar Karl-Anthony Towns. On draft night, after selecting Towns, Flip all but admitted to the tanking in his remarks to the press, made with an ear-to-ear smile.

Second, the Wolves have another tanking incentive this year. No, they will not be bad enough to draft at the top again; not without incredible Magic/Webber or Bulls/Rose type of lottery luck, anyway. But the Wolves owe their first round pick to the Boston Celtics, unless it falls inside the top 12 of the draft. Why do they owe this pick, you ask? Well, because David Kahn included it in a trade with the Suns that sent out Wesley Johnson’s contract. That’s right, the Wolves had to pay the premium of a protected first round pick in order to unload the salary of the player drafted ahead of DeMarcus Cousins and Paul George.

Importantly, if the Wolves keep the draft pick this year, they do not owe a first rounder for that trade and it instead becomes a pair of second-round picks; a much lower cost.

Also importantly, the Wolves owe their 2018 first-round pick to the Hawks as partial consideration of the Adreian Payne trade. In other words, they risk losing 2 first rounders in 3 years if they win too much this year.

Anyway, the Wolves will owe this draft pick if they finish in the top 18 — outside the bottom 12 — of the league standings. Last year, the 18th-ranked record had 38 wins. In order to make the playoffs — a feat that would come with benefits both tangible (postseason experience for the players and added revenue for ownership) and intangible (this team’s fanbase deserves to see a damn playoff game once a decade!) — they’d probably have to win 45 games, if last season is a reliable predictor.

In other words, there is a “danger zone” of sorts, between the 38-win and 44-win end point where the Wolves would achieve neither a first-round draft pick, nor a playoff berth.

Before today’s game, the Wolves had a .500 record which obviously projects a 41-win total, smack in the middle of the danger zone. After today’s loss, their “net rating” (differential per 100 possessions) is +0.2. In other words, both the basic and advanced measures for this team are predicting a win total that falls in that zone of wins that will forfeit the draft pick, but not quite make the playoffs. Had Rubio played through his various sorenesses (at different times described as knee, hamstring, and now ankle) the Wolves would probably have at least 1 additional win. They’ve lost 5 of the 6 games without Ricky, including one at home versus the Hornets.

The easiest way for the Wolves to avoid this danger zone is to hold Rubio out of enough games to ensure that they can’t win more than 35 or 36 games. If you assume that the Wolves will win 50 percent of games with Rubio and 20 percent of games without him, they’d have to hold him out of 20 games to achieve a 35-47 record, which should be safely in the bottom 12. (Eds note: I just did some no-shit algebra to figure that out.) He’s currently on pace to miss 29 games.

The difficult, some might say more constructive, way to ensure that it doesn’t happen is to try to win as many games as possible and earn the 7th or 8th seed in the Western Conference. You know, the way that the Flip Saunders-led Timberwolves did in 1997, when they won 40 games and got swept by a veteran Houston Rockets team in the first round, but built a foundation that allowed for 7 straight playoffs appearances after that one. That 1997 Wolves team was led in minutes by Tom Gugliotta — a veteran who made that year’s All-Star Team — but was then followed by 20-year old Kevin Garnett and 19-year old Stephon Marbury.

Fourth on that team in minutes? Sam Mitchell, the current Timberwolves (interim) head coach who certainly appreciates how much early success can benefit young players with upside. Mitchell was to KG and Marbury what he now wants KG, Prince and Miller to be to Towns, Wiggins and LaVine. Sam would presumably like to see Andrew Wiggins reach the playoffs in his second season much like KG did in his.

The Wolves have been outspoken in comparing their current rebuild to what Oklahoma City did by drafting Kevin Durant, then Russell Westbrook and Serge Ibaka, and then James Harden. It’s worth pointing out that the Thunder never artificially lowered their expectations along the way. Instead, they jumped from winning just 23 games in 2009 (Westbrook and Ibaka’s rookie season) all the way up to 50 in 2010. From then on, they were contenders. That’s the best rebuilding job in modern history, and it included a massive, unexpected leap in a single season that changed the entire game for them, going forward.

In terms of hope for the future, the Timberwolves history has never matched the apex of the early stages of Steph & KG, with the possible exception of this moment right now with Andrew Wiggins becoming a lock for 20 to 30 high-flying points a night, and Karl-Anthony Towns looking like a center that will play in a dozen All-Star games. If this Wolves team can sustain this defensive consistency all season and clean up some of the youth-caused offensive mistakes over time, it will challenge for a playoff spot, and reset the franchise trajectory much higher. They’ll fill the arena consistently. Their heightened expectations will become self-fulling prophecies. When Karl-Anthony Towns says that he wants to make the playoffs THIS YEAR, and wants to learn how to win championships from KG, people will stop laughing at him.

If it isn’t clear, I would much prefer that the Wolves treat this season as one for serious basketball, and set their own expectations as high as possible. It would be different if they needed to add more young talent, but they don’t. Between the immediate nucleus of Wiggins and Towns, and the rest of the young depth including LaVine and Muhammad, there is more than enough “upside” on this roster to eventually become a championship-caliber team. It would be different if it came at the expense of playing time for Wiggins, Towns and maybe even LaVine. But as of now, those three are the team leaders in total minutes, and even if Rubio comes back as the starting point guard, the Wolves can do the logical thing and slide LaVine over to the off-guard next to him. The only cost is the draft pick, and they would have to come to grips with that if they want the bigger prize of playoff basketball and a rebuilt atmosphere of competitiveness unseen here since KG’s first Timberwolves tenure.

Bringing this back to Ricky Rubio and his ankle, I guess maybe the simplest way to look at it is this:

Either he can be counted on to play, and the Wolves might win so much that they lose their draft pick, or he can’t, they’ll keep the lottery pick, and probably think hard about spending it on a different point guard.