LaVine at Point Guard: An Ongoing and Complex Question 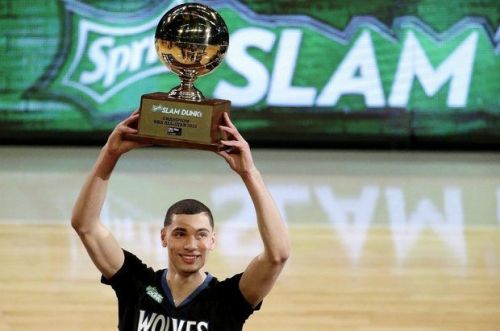 We have a Zach LaVine issue.

He’s been playing a lot of minutes at point guard and many feel that this is a bad idea. The Wolves are winning more than most expected before the season (4-5 record, as of last night’s loss at Indiana) but possibly less than they could’ve, if LaVine played fewer minutes at the point. It’s a difficult question — whether playing him there makes any sense — and probably not answerable within a great deal of certainty.

What we don’t know:

As I started with, this is really difficult to assess with much certainty. If LaVine had less physical upside, I think the answer of what to do with him (sit him on the bench) becomes clearer. But the athleticism is spectacular, the upside is there, and the Wolves are smart to make his development a priority. Also, I think that a basic “lead guard” if not “true point guard” skill is exploding past a defender and wreaking havoc in the paint. LaVine doesn’t necessarily NEED to play point guard to hone that practice, but the sorts of things he’s asked to do at point (bring the ball up the floor, dribble against pressure defense, drive-and-pass) are more likely to improve his penetration skills than the in-game experience of playing off the ball, which inevitably involves more floating and cutting.

The last two questions listed, the one about LaVine’s teammates and the one about gunning for a playoff spot, I find to be more important than some. Maybe I’m impatient or short-sighted, but I really find there to be a big difference between winning and losing, and I find the jump from loser to winner to not only be incredibly exciting to watch (as we saw in Ricky Rubio’s first season) but also far less of an inevitability than we sometimes expect.

I really believe that Karl-Anthony Towns is the real thing. I’ve never watched a Timberwolf rookie and felt so sure of this after only 9 games. With Towns, it isn’t that he shows flashes of greatness (like Garnett, Love and Wiggins before him) as much as he shows a ready-made game. He has a game that is prepared to win NBA games right now. In some respects he is more similar to rookies Stephon Marbury and Ricky Rubio before him (though he seems better than both of them) than Garnett, Love and Wiggins. As his minutes increase (currently averaging 29 per game) Towns could potentially be an All-Star THIS YEAR.

With Towns being this good, right away, and with the rest of the roster fairly developed, I see no reason why the Timberwolves should artificially lower their own expectations of success, by teaching Zach La Vine how to play point guard in the middle of the season. The core nucleus of this team is Karl-Anthony Towns and Andrew Wiggins, and each guy can still log 30 to 40 minutes per night while they try to win with smart team strategy that builds winning muscle memory. Last night, late in the game, Miller initiated an attack that ended with Wiggins diving baseline behind Paul George at the right time to catch a feed for a layup. I’d like to see him develop those instincts in a winning setting next to somebody like Miller, more than I’d like to see him post up and receive a flimsy feed from LaVine with 7 or 8 on the shot clock. The former is easier and maybe its better-developing purpose seems counterintuitive compared to what Wiggins went through last year as a go-to guy, but I don’t think so. I think Wiggins and Towns would both benefit from learning to play the right way, and then seeing over time how they can use their high-level talents to expand. And I think that this is more likely to happen without LaVine learning how to play point guard during games.

On his most recent podcast with Joe House, Bill Simmons got to talking about the Wolves, their coaching situation, and their refreshed possibility of making the playoffs, in view of Towns’s immediate impact. Simmons said the following things:

Simmons was discussing the Wolves in the context of whether Sam Mitchell should be the coach, or whether the Wolves should immediately pursue someone better (like Thibodeau) but his stream of consciousness assessment carries over to this LaVine Question, and whether this season is one for winning games, or for something else.

It’s an ongoing question in a long season, and — for LaVine — hopefully a long career. Maybe in a year or two, LaVine will be carving up defenses off the dribble and we might look back at this Point Guard Basic Training as a foundation-setting phase. Or maybe he’ll never develop into an all-around helpful NBA player and this will seem like a wasteful experiment.

I guess for now, I just hope Ricky Rubio gets back to full health, so the available point guard minutes are diminished, but there will be pivotal sequences this year no matter Rubio’s health that hinge on the LaVine-Miller alternatives, and the big-picture implications will be there hovering.

5 responses to “LaVine at Point Guard: An Ongoing and Complex Question”