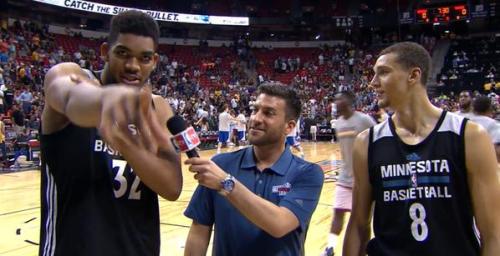 The last time we posted, it was June 29, and Andy G mused about the Wolves’ 2015 draft, in which they selected the much-haralded Karl-Anthony Towns #1 overall and pulled off a trade to get back into the first round to draft Apple Valley native and Duke Final Four hero Tyus Jones at number 24.

Much of the reaction to the draft fell into a few different bins. One bin could be called “Yay, we took Karl-Anthony Towns #1!” This encompassed most of Wolves fandom, at least that segment of which is most active on Twitter and websites like Canis Hoopus. Towns was the consensus top player overall and Wolves brass finally made the obvious correct choice: they got the player that analysts and smart fans expect to be the best player from this draft. Towns fills a position of need for the Timberwolves. Nikola Pekovic, the brutish but oft-injured Montenegrin who is under contract with the Wolves through the 2017–18 season, has foot injuries that may end up threatening his career. He can’t be counted on as an integral anchor for the Wolves at center as the rest of the team blossoms under the leadership of rising stars like Andrew Wiggins and Ricky Rubio, not to mention intriguing prospects like Shabazz Muhammad and Zach LaVine. Kevin Garnett is also back in the fold, on a two-year, $16 million deal. But Garnett cannot be fully counted-on either, for he is too old and too often injured. His return appears more as foreshadowing his move into ownership and management with Flip Saunders and Glen Taylor than it does a productive output on the floor this season or next. The bottom-line is, the Wolves had a need at Center. As a marvelously skilled big man, Towns should eliminate that need altogether.

A second bin of Wolves draft-related conversation could be called “We took Tyus Jones! He’s from Minnesota!” I’ll talk a bit about Jones first, and then discuss my reactions to Karl Towns.

This was actually a more heated debate on Wolves Twitter and Internet forums than any discussion of, say, whether Karl-Anthony Towns was actually going to be a better pro player than Okafor (with or without taking into account of how either/both would likely fit with the Wolves’ roster). The debate revolved around whether the Wolves should and would have given up the assets they did to trade up for Jones were he not a native Minnesotan and a Minnesota basketball legend at the young age of 19. Jones was one of, if not the, best Minnesota prep player ever. The Apple Valley native took his talents to Durham last fall and left in the spring as Final Four MVP of the Duke team that won the national title with him running the point as a frosh.

All of this made Jones very enticing as a prospect to many connected with the Wolves, formally or informally. Tyus might be a major prospect–just look at his record at every stage.

The problem is, Tyus might not be that great of a prospect at all. The NBA is different league from the NCAA and certainly from Minnesota prep ranks. Jones is not particularly built to dominate in the NBA. Today’s prototypically dominant NBA point guard is bigger, more explosive, and more athletic than Jones is. Jones is crafty with the ball and he clearly understands the game well. But he is also very weak. As painful as this is to type, his physical weakness at the point in Las Vegas Summer League play reminded me of the weakness we saw when Alexey Shved was a tantalizing rookie.

In contrast, Zach LaVine, who has never looked the like the strongest guard on the floor, never looked as weak (to me) as Jones (or Shved) did during their initial days with the Timberwolves. (Eds. Note: LaVine looks noticeably stronger to my eye test. He should be strong enough to survive on the wing and create some offense of his own without fully dominating the ball as a shoot-first point guard, which was basically his mindset last year. Lavine only played two summer league games. True to form, he was brilliant in one and turned in a stinker in the other. He ended up averaging 22 ppg on 32% shooting.)

All that said, Jones was a pleasant surprise during LVSL–at least in my opinion. He started out slow with a rough night in which the jitters were obvious. After that, he played like savvy veteran who right now does not have a veteran’s body–or anything close to it. Jones has only put up 3 assists per 36–not great for a point guard in any league, summer or otherwise–but the numbers belie Jones’ actual ability to run a team well.

Here’s Jones in his second LVSL games, featuring some great John Malkovich commentary (!) in the background:

I think this bodes well for Tyus moving forward. Honestly, I would not have advocated the Tyus trade when it happened. I thought at the time that Zach LaVine should be the future backup point guard to Ricky Rubio, who should be played as many minutes as possible, including during crunch time. I still believe that about Rubio, but with what both Jones and LaVine showed during summer league, I am finding myself in agreement with those who argue that LaVine is best as a backup shooting guard who’s an “instant offense” type, as well as those who argue that Tyus Jones can be a very solid backup NBA point guard. I don’t think Tyus has the physical tools to take Rubio’s job–now or in the future–but I do think he can be a big asset on a competitive team.

What of top pick Karl-Anthony Towns? Well, I think Karl Towns will play a big role on any Wolves team that is competitive. He had one dominant game, in a loss to Portland, in which he showed pretty much the full arsenal.

In that game, Towns had 20 points, 10 rebounds, 3 blocks. He was the best player on the floor.

The critical question that will be asked moving forward is whether the Wolves selected the right player in Towns over Duke’s Jahlil Okafor. Most believe that they did. But it’s way too early to draw any conclusions. Still, we won’t let sample size stop us from looking at a few numb#rs.

Here are the raw per-game numbers. You’ll notice Okafor only played two games in Vegas. That’s (presumably) because he had already soaked up some previous summer league experience prior to Vegas.

Not unexpectedly, Okafor scored more than Towns (18.5 vs. 12.8). Okafor also grabbed more boards per game and, despite Towns’ very nice passing, Okafor also dropped some dimes his self.

Of course, Okafor has a very advanced post game, which gets likened to everyone from Al Jefferson at the low end to Hakeem Olajuwon at the high end. When it’s all said and done, I think he’ll be a fine player. After all, Jah dropped jaws like this. Let us just say that both players are likely to be very, very good. I can’t not include this Okafor montage in this post.

A final curiosity about LVSL (Eds. Note: For Punch-Drunk Wolves, at least) was Emmanuel Mudiay. I was a huge Mudiay fan prior to the draft, and believe that he may have that je ne sais quoi that guys like John Wall and Dwyane Wade have. And Mudiay didn’t disappoint, winning the LVSL MVP while giving the Nuggets new hope for the future. If his wallet doesn’t say “Bad Motherfucker” on it, it should.

That’s all for now. The Summer League tournament ends tomorrow. In the meantime, I’ll leave you with some Mudiay to pregame to.