INBOX: The Lows and Highs of the Timberwolves’ Stank-Tank and Rick Adelman vs. Flip Saunders 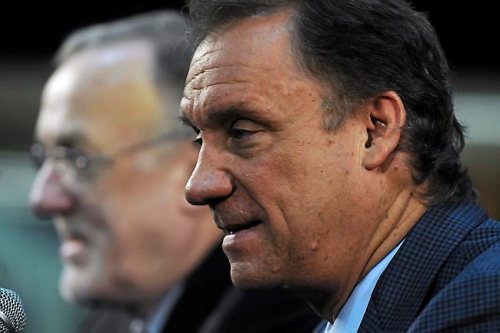 The Lows and Highs of the Wolves’ Stank-Tank

Andy G: You and I are in complete agreement on the initial question of whether the Timberwolves are (and have been) tanking, this year.

We don’t need to beat that dead horse.

But let’s talk a bit more about what their tanking methods have done — both good and bad — and what they tell us about this team, its coach, and its future.

I’ll let you start: with respect to the tanking the Wolves have done this year, what parts have bothered you most, and are there aspects (aside from the boosted draft position) that you think have had positive effects (whether anticipated/calculated, or not)?

Patrick J: What has bothered me the most? Two things: the quality of the play–because we’re playing bad players and sitting better players–and the lost opportunities this has brought about.

How much fun is it to watch a team that starts Lorenzo Brown, Zach LaVine, Andrew Wiggins, Gorgui Dieng, and Adrian Payne? (Eds. Note: that’s how I’m spelling Payne’s first name until I know for sure that he’s going to be in Minny for a while.)

Wiggins, sure. (More about this below.)

The rest? Not at all.

PJ: As much as I love Zach LaVine dunks–and I do love me some Zach LaVine dunks–the drop in the team’s watchability with that group as the team’s headliners is steep from the group that includes Ricky Rubio, Nikola Pekovic, Kevin Garnett, and Kevin Martin. They’re also sitting key backups like Robbie Hummel and Anthony Bennett. The lineup of guys who aren’t playing is pretty fun and intriguing for all kinds of reasons. I know a lot of people were excited to see Kevin Garnett playing in a Wolves uniform. I was one of them. When we traded for Garnett, never did I think that the memory I would have of him from this season would be so faint–it almost feels like he isn’t really a Wolf and the trade and the press conference and him on the court with Ricky and Wiggins was just a dream. I was looking forward to seeing Garnett mentor Anthony Bennett, the recent #1 overall draft pick, and a fellow power-forward in need of counsel from a wizened future hall of famer like Garnett. That hasn’t happened.

It’s also irritating that Flip Saunders is denying that the Wolves are tanking when it’s clear that they are. Look at the lineups they’re playing, the roster of guys who are out with “injuries,” and the nature of those “injuries.” Does it appear that there’s a pattern there? Yes, it does. It’s been written about plenty already. At the end of the day, I know Flip can’t come out and admit that the Wolves are holding guys out who are healthy enough to be playing in order to improve the Wolves’ chances of getting a top draft pick this summer. But the fact that he acts so offended when asked about it by the media, and denies it so vehemently is extremely frustrating. No one likes being lied to.

The Good: Wiggins and LaVine Development (in different but equally important ways)

PJ: So what are the positives that we’ve seen during this grim period?

Andrew Wiggins: Legitimate #1 Player: Wiggins has had to shoulder a huge burden of the load as the team’s go-to guy on offense and defense. He’s a one-man show. He’s playing a ton of minutes, and even though he has incurred more mileage and wear and tear than should be necessary, we’ve learned something valuable about Wiggins that was visible at times earlier this season, but wasn’t a certainty until the tanking heightened more recently. Wiggins has basically shown that he can be a reliable 20+ ppg guy. He’s already a very solid first option on an NBA team. He’s the target of opposing teams’ defense every night because he’s the Wolves’ only real offensive threat. And he’s been scoring well and shooting a good percentage while being forced to take a lot of difficult shots.

Zach LaVine’s Development: LaVine’s development has been impressive. I do believe we’ve seen real development, and by real, I mean real enough to answer perhaps the key question about his future as an NBA player: Can he start applying his god-given talent and sneaky-refined skill-set (especially impressive given that he’s essentially a 19-year old athlete who didn’t play many minutes in college) in a smarter, more productive way, with fewer unforced errors. He has done that. His shooting percentages (both overall and from the three) are up. He looks both more assertive and confident leading the break and getting buckets in half-court sets. He’s continued to show a very good ball-handling ability, and there are still questions about whether he can be an effective point guard. (His assist-to-turnover ratio, for example, has remained very bad.) But he has shown he can be an effective player – at whatever position – in the NBA. I look forward to seeing what he looks like with an offseason of lifting and work on fundamentals under his belt. (CC: Penberthy, Mike; Saunders, Flip).

Rick vs. Flip: The Bullshit Factor

Patrick J: So I mentioned above that it is irritating that Flip smugly dismisses the notion that the Wolves are tanking. Along these lines, you mentioned something interesting to me about how Flip’s personality and style are so different from his predecessor here, Rick Adelman. You’ve been at most of the home-game pressers this season with Flip, and were at a bunch during the Adelman period. What do you make of the differences?

Andy G: Yes, over the past few weeks, since they shut down Garnett, Rubio, Pekovic (and now Martin and Neal) what has struck me is just how different Flip is from Adelman. And in this specific situation, the way in which they differ most involves possibly my favorite part of Adelman, in the time I covered him as Timberwolves coach.

Adelman was completely and totally incapable of bullshitting. It wasn’t just against his personality and instincts, but he had a “nothing to lose” type of outlook here, having saved the franchise from the depths of Wittman/Rambis Hell, and was dealing with his wife’s medical issues that were clearly (and understandably) more important to him than his basketball team. So what we got from Adelman, whether good, bad, right or wrong, was straight truth*. If that meant calling out Ricky Rubio, that’s what he’d do. Hell, if it meant calling out himself and his own staff, he’d admit that his team wasn’t properly prepared to play. Adelman would field questions and answer them directly. He normally wouldn’t go out of his way to expound on tactics or decisions, but he didn’t dodge questions either. I think it’s reasonable to say he did not like the media aspect of the job, but he handled it professionally. Actually, I know that he didn’t like it because he had this to say in a recent interview with Kerry Eggers of the Portland Tribune, when asked what he does not miss about coaching:

“Everything has gotten more intrusive. You have to speak (to the media) before and after every game. You get asked the same question over and over again, and you have no news.”

(*One exception was when Kevin Love broke his hand. I suspect Adelman knew whatever the real cause of that injury was, but for important reasons had to accept the company “knuckle push-ups” line. I also suspect that really pissed him off.)

I always respected this about him, because he fielded questions even though he didn’t enjoy that process, and answered the best he could. Pure honestly blended with respectfulness and professionalism is not necessarily a common blend of qualities; especially for millionaire celebrities, like he is. When Adelman spoke, I learned his true feelings about any given basketball matter, and I never felt like he was selling me on an idea.

Flip is nothing like Adelman in his dealings with the media. He is better in one important way: he clearly LOVES talking to friendly and familiar press, and enjoys explaining basketball to us novices in the crowd. That is a legitimately cool thing to experience, because — no matter how much we bang our heads against the wall over the dearth of three-pointers — Flip knows the game better than we do. It is his life, and has been for decades. So his pressers are generally a more entertaining event than Adelman’s. He provides unnecessary levels of detail and frequently cracks jokes.

But, like a ton of accomplished and networked coaches, Flip can also bullshit with the best of them. And this quality has been coming out more and more this season, as the team holds its best veteran players out of every single game (despite not having real “injuries” but just soreness) and he laughs about how beat up his roster is, and rails against the Jazz broadcast for having the audacity to suggest the Wolves might be tanking. It feels like when he was supposedly searching for a new coach, but everybody assumed (correctly) that he would eventually just hire himself.

Here’s the thing: Adelman wouldn’t tank games. He was a coach, not a GM, and he was not the type of person who would care about the longer term, bigger picture ideas involving high draft picks and developing players like LaVine. He’d want to win as much as possible, and that’s an admirable quality in any coach or competitor. But not only would he not want to tank, but he’d also be straight with whatever was going on. If Rubio had missed 50 games (and counting) due to one ankle sprain and one ankle turn, Adelman would have had something to say about it. He wouldn’t be able to ignore the elephant in the room.

And I guess I liked that about him.

So even though this personality trait has no direct bearing on the Wolves present status or its future, it’s been hard for me to contain criticism of the recent comments that deny tanking, or the general vibe around this team as it charges ahead toward a 29th place finish in the league standings.

4 responses to “INBOX: The Lows and Highs of the Timberwolves’ Stank-Tank and Rick Adelman vs. Flip Saunders”