What will Kevin Garnett’s return to Minnesota bring to the Wolves and the state of basketball in Minnesota? The trade still has everyone excited. Some of it is sentimentality about “The Kid” who grew up in front of our eyes. He became the franchise’s best player ever, brought the Wolves to the playoffs eight straight times and to the brink of the Finals once. He was our team’s only league MVP. A lot of the best (and a few of the worst) moments in team history are tied up in Kevin Garnett, and his time spent in a Timberwolves uniform. There’s going to be a buzz when The Kid returns to the place it all began.

There’s been some discussion of Garnett’s likely impact on the team, but little about what Garnett might be thinking about coming back to Minnesota. How does he see this affecting his legacy? What does he want to accomplish. It sounds like he wants to become an owner of this team, but why ownership? And why own the Wolves? You know he’s a student of NBA history and that he thinks about this stuff—and takes it seriously.

Garnett himself has been mum about what his end game is in Minnesota. I delve into some possible angles below the fold.

As I see it, there are a bunch of interesting angles to what Garnett might see in a return to Minnesota, both for himself and for his place in the history books.

Andy G mentioned something about Garnett in his piece that got me thinking. He wrote that KG was perhaps the only great player the Wolves have ever had. (Eds. Note: Kevin Love might have something to say about that, but it’s unclear yet that Love is as impactful a player as Garnett despite Love’s gaudy numbers. Also see Andy’s other excellent piece on KG’s return) But what Andy’s post got me thinking about was the player who should’ve been great–and should’ve been Garnett’s sidekick during his long career as a Timberwolver–Stephon Marbury. Garnett and Marbury showed amazing potential as a duo. They were this.

And that wasn’t only one of the coolest moments in franchise history–it was one of the most promising. Steph and KG could’ve been great together in their prime.

For a while, they were BFFs. They did silly things like this ESPN The Magazine commercial together.

They were supposed to be the next Stockton-to-Malone.

Alas, Steph ruined it and never really recovered. KG did what KG did; if you followed the Wolves, you know that history well enough.

It’ll be weird to see Garnett back in ’Sota in the dim twilight of his career, playing with (and, hopefully, mentoring) Andrew Wiggins. Wiggins has the same kind of all-world talent as Marbury and, like Stephon, was hyped in the media as the “next revolutionary player” as a high-schooler. I think KG learned a lot from his falling out with Marbury, and I think he believes he has some unfinished business to take care of in Minnesota before he can call it quits. I believe he wants to make a final mark on, and contribution to, the franchise he played the best seasons of his career with, before an emotional divorce.

The chances of Garnett winning one final title here are slim-to-none. Garnett is no longer an elite player, he’s a role player. He’s a pretty good role player, but the role he fills is that of “limited-minutes, defensive-minded forward who can stick mid-range jumpers and rebound.”

The team he’s joining has a lot of young talent, and a truly elite prospect in Andrew Wiggins, but—even in a “best case” scenario––is a few years away from having the maturity to compete for a title. They’ll be lucky to be a competitive playoff team two years from now, in Wiggins’ third season, which would be Garnett’s last season if he signs a two year extension with the Wolves, as some expect.

In 10 years, it’ll be interesting to see how Garnett’s return to Minnesota is remembered. If he fails to bring along Wiggins (and maybe the other young players, but Wiggins is most important) and the Wolves don’t get significantly better, it will likely be remembered as a sad, forgettable reunion with the team with which he played the majority of his historically great NBA career. This will be especially true if KG disrupts the future leadership structure the franchise clearly envisions, centered around Ricky Rubio and Wiggins. There is some risk in this move, as Britt Robson pointed out.

But if his presence, mentorship, and teaching help Wiggins and the other young Wolves realize their full potential, his comeback could be remembered as a selfless one that helped the Wolves develop the one player not named Kevin Garnett who had the kind of transcendent talent necessary to take them deep into the NBA playoffs—or—gasp!— to the NBA Finals. 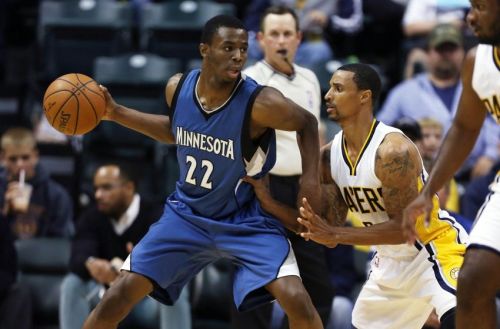 Garnett should be able to help Wiggins master these kinds of shots out of the post.

Garnett’s Future with the Wolves

Even if Garnett retires to the sidelines or owner’s box, I believe he wants to win a championship with the Wolves and believes he can do so, whether as a player, a coach, or an owner. He wouldn’t be doing this otherwise. It wouldn’t be worth the spectacle.

And if we bend our minds enough to temporarily envision Garnett and Saunders succeeding, it will be interesting to see if it changes how some people think about what was lost due to the KG-Steph breakup–including, perhaps, Garnett, whose mind might rest just a bit easier.

If that’s possible for him.

Until Wednesday, here’s some KG nostalgia to pregame to.

And some *very* vintage KG highlights, if that’s your thing.