The Jahlil Okafor Hype, in 1 Play

In case you missed it, the Timberwolves are struggling. They have a 5-31 record, no quality veteran players who are healthy and motivated enough to play well, and are riding a 15-game losing streak. (!)

Inevitably, then, some of us begin thinking about the draft, and looking at the best college players, in hopes that one of them can help Andrew Wiggins and company resurrect this franchise that reached the playoffs every year from 1997 through 2004.

Also, in case you missed it, Jahlil Okafor of Duke is the most touted prospect in the anticipated 2015 draft class. He has size, listed on Draft Express at 6’11” and 272 pounds. His wingspan is 7’6″ and his standing reach is 9’3″. For a helpful comparison, consider the measurements (in DX’s awesome database) of DeMarcus Cousins, the league’s most dominant low-post force (by far): Cousins, as a prospect, measured at 6’10.75″, 292 pounds, 7’7.75″ wingspan and 9’5″ standing reach. If Boogie is physically overwhelming in the NBA at that size, Okafor — slightly taller, slightly leaner, with slightly shorter arms, will be plenty big to play as a low-post center.

But it is skill where Okafor stands out when you watch any Duke game. I’ve seen a handful, and without exception have come away impressed every single time. Put simply, he has the most advanced low-post game that I’ve seen in an NCAA center since Tim Duncan. He’s currently averaging 19 points per game on 68 percent field-goal shooting.

One play today, in Duke’s first loss of the season (Okafor had 23 points on 8-11 shooting, with 12 rebounds and 3 blocks) stood out as a good example.

Here’s a breakdown with fuzzy pictures taken by my phone of my TV.

* Next, Okafor makes himself available with strong post position and a target hand for his teammate to throw to. He catches the ball a bit further outside the paint than what is ideal, but that’s okay. He’s skilled enough to do his thing from 15 feet out. 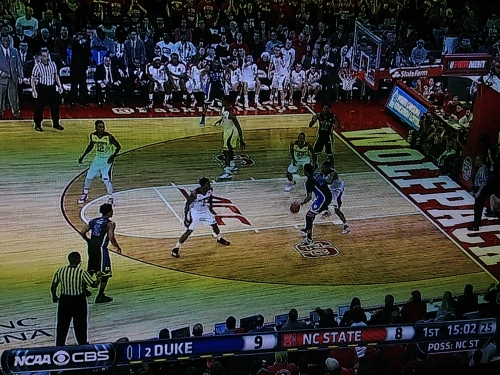 That was just one play, but it illustrates the main reasons why Jahlil Okafor is an unusual prospect, and has the look of a franchise post player destined for All-Star and All-NBA teams: size, strength, understanding of position and court awareness, and low-post scoring skills.

Duke and Kentucky are on national TV every weekend. If you ever find yourself feeling sad about the state of the Wolves and want a couple hours to feel more hopeful, I suggest tuning in.  We’ll be drafting a big man this summer and there’s probably an 80 percent chance that one of them plays for those teams. (I’ll keep a closer eye on Kentucky as the season moves along. Basic early impressions are that Willie Cauley-Stein is a fascinating defensive player and that Karl-Anthony Towns’ hype exceeds what is currently happening on the floor.)

One response to “The Jahlil Okafor Hype, in 1 Play”