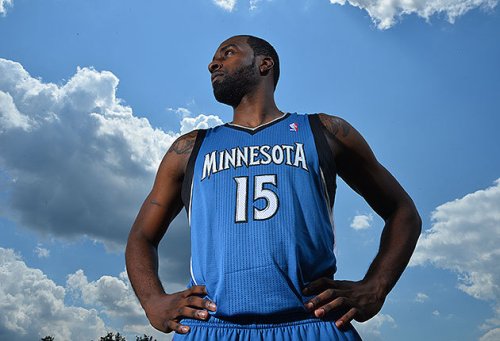 Since he was drafted in June 2013, Shabazz Muhammad has been the most interesting player on the Timberwolves. This is true for many reasons, including but not limited to the following:

Since being drafted by the Timberwolves, Shabazz’s mystique has only grown. He sat on the bench for most of his rookie season; one in which his team was gunning for a playoff spot that was not to be. Once it became clear that the Wolves were not playoff-bound, the retiring Rick Adelman began to play his rookies a little bit. While Gorgui Dieng was the late-season revelation — posting a 20/20 game, and general productivity across the board — Shabazz also impressed fans in flashes.

In a late-February game at Phoenix — one the Suns badly needed for their own playoff hopes — Shabazz was the game’s MVP. In 24 minutes of the most energized bench play we’d ever seen around these parts, Muhammad scored 20 points, grabbed 6 rebounds, and collected 2 steals, leading his team to unexpected victory. Despite that great performance, his playing time did not stick, though he did have more moments and flashes in the final weeks of his rookie campaign.

Then came the off-season, which seems to have been a pivotal one for Shabazz. He came into the NBA a little bit like his fellow Bruin/Timberwolf, Kevin Love, in that he was carrying a bit more weight around than would be recommended for a basketball player. He didn’t have a “gut,” in the white-collar, nine-to-fiver sense, but he also wasn’t ripped like most NBA wings are.

Shabazz spent the summer in California working out with Frank Matrisciano, a Navy SEALS trainer with unconventional methods but proven results. The workouts, which are called “chameleon training,” obviously proved beneficial for Shabazz. He looked so much leaner at Media Day — even in his face — that I barely recognized him as the same person from a few months back.

And that brings us to the present, and the most interesting fact of all about Shabazz Muhammad:

Right now, he is the best player on the Timberwolves.

You can bold, underline, or italicize the “right now,” because it’s an important qualifier. When Ricky Rubio is healthy, he’s a better all-around player than Muhammad. Ricky doesn’t score as many points, but his impact on team success is more substantial and proven over a multiple-seasons track record. The same is probably true about Kevin Martin and Nikola Pekovic. Thaddeus Young has played below his career averages this year, dealing with a new environment and a personal tragedy, or maybe he’d be above ‘Bazz, too.

But right now, it’s pretty much a fact that Shabazz is playing better than all of his teammates.

What this means in a nutshell is that, since Rubio went down, the Wolves are playing their best basketball with Shabazz on the court.

All of this leads to the puzzling realization, which you already know if you’ve been paying attention:

He’s averaging 17.3 minutes per game, which is good for 11th on the team. Last night at San Antonio, he played 21 minutes, which is a little better than his average, but not (nearly) as many as he deserves and the team needs from him. In that modest playing time, he scored an efficient 20 points and grabbed 3 boards.

Flip seems to justify his treatment of Shabazz on two fronts:

The first is that Shabazz is sometimes out of position, or doesn’t run the plays properly. My smart-ass counter to that would be something about Shabazz preferring monster dunks to mid-range jumpers.

But granting Flip the obvious concession that players need to know the schemes, I still think that the plus-minus stats are refuting any notion that Shabazz is hurting his team. Furthermore, this is such a young team and Shabazz is just a second-year player. Some leeway in gameplan and court awareness should be expected, right? I think other players are being forgiven for minor sins more than Bazz is, despite worse performance.

The second is that Brewer is a better defensive player. This seemed to be the justification, on Friday night, for playing Brew in overtime against Houston, instead of Shabazz (who had 20 points that night, in 26:32 of action). I would have to agree that Brewer is a better overall defender than Muhammad, right now, but at least consider the following from a devil’s advocate:

One possible argument against extended Shabazz minutes is that he is kind of a black hole. He shoots a lot. The NBA now measures detailed tracking stats, and Shabazz rates near the bottom of the league in the number of times he passes per minute of playing time. (I’d link to a URL, but nba.com’s page — as I navigate it, anyway — isn’t very advanced for ideal sorting of their SportVu data.) The counter to this counter is that those same SportVu stats show that Shabazz leads the entire NBA in “points per touch.” (I’m leaving out Dwight Powell of the Celtics, who has barely played this year, but technically ranks first.)

The disparity between passing frequency and scoring per touch makes sense if you watch how Shabazz operates on offense. He’s an opportunistic cutter who often catches the ball with a head of steam toward the rim. He’s making a scoring move before the ball touches his hands. That helps the team. Where he needs to improve and (to my eye) seems to be, is in being more judicious out of the post. Last year, he also seemed to shoot every time when he received a post feed. This year, I think, he’s kicking it out sometimes to either re-position himself or find an open shooter.

A closing point about why Shabazz needs game minutes more than practice time:

His weaknesses are not likely to be improved very much by practice. Defensive awareness, particularly for a wing player, is best improved against opponents who are running sets that you aren’t completely familiar with. In practice, players know what play their opponent is running. They run those same plays themselves, on offense. It’s a lot more difficult to keep track of the ball and an opponent when you don’t know what either is about to do next. That experience comes in games; not practice. Also, the Timberwolves have a young, inexperienced, and less talented roster than almost all of their opponents. Games provide a better challenge on a pure “strength of opponent” basis than Timberwolves practices, too. (In this regard, you can understand how the Spurs talent-development machine works. Their players make each other better by practicing against the most difficult-to-defend players AND strategies.)

Wiggins is getting those reps. Shabazz is not; at least not as many of them.

Flip can be forgiven for not expecting Shabazz Muhammad to be his best player over an extended period of time. I didn’t see it coming either. I don’t know if anybody did. But it seems to me that we’ve reached a point where enough is enough, and Shabazz needs to be in his starting lineup and playing at least 30 minutes per game.

It’ll help the team compete now, and develop for the future.