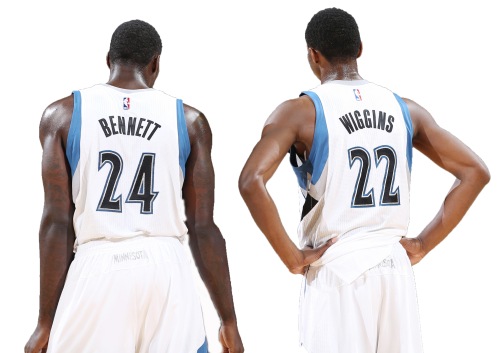 On Monday night we previewed the whole league. Now, I’m back to preview the Timberwolves season (that begins tonight in Memphis) in more detail.

I thought it made sense to organize this by three categories:

* Things that I’m excited to see

* Things that worry me

* Things that I expect — or do not expect — to happen

* Player that I’m most excited to watch –> Ricky Rubio

I’m most excited to watch Ricky Rubio play this year, for reasons that I and many others have written about ad nauseam. With Rick Adelman and Kevin Love gone, the Wolves will run a lot more ball screen action with Rubio. Gone is the high post-centric “Corner Offense” that Adelman learned from Princeton legend Pete Carril. In its stead will be… well, we’re not exactly sure yet. But anything different should be an improvement for Rubio, who was a terrible Princeton fit. Since most NBA teams run a lot of high ball screen action, it’s reasonable to assume the Wolves will do that, too.

The hope is that Ricky will look like a more-skilled version of his rookie-year self. That guy was the league’s most entertaining player and had his team playing over .500 ball at the time of his injury. Sure, they had Love playing at a high level and producing more than Rubio. But if you remember, that was also before Pekovic broke out as a good center, and it was with the wing positions filled by Luke Ridnour, Wesley Johnson, Mike Beasley, and a hobbling Martell Webster. Ricky was the initiator of offense, and good enough to lead–sometimes carry–them with his playmaking. I’m hoping to see that player again this year.

* Player whose development I’m most interested in following –> Andrew Wiggins

With all due respect to longtime PDW-fave, Anthony Bennett (whose progress will also be a blast to watch) this one has to go to Wiggins. He’s one of the more hyped draft prospects in recent league history. His physical tools are elite for an NBA wing. Wiggins is 6’8″ with long arms, no body fat, a high motor on defense, and a 44-inch vertical jump. His jump shooting form is nearly textbook. He played really well as a freshman at Kansas. He won’t turn 20 years old until late February.

If the Wolves are ever going to rebuild this franchise in the wake of Kevin Garnett’s eight playoff appearances, it needs somebody like Wiggins; a two-way star that makes life easier for his teammates. On both ends of the court. I don’t know if Wiggins can become like KG in that respect, but I know that I look forward to watching and finding out.

I was and will forever be a huge Rick Adelman fan, and I think that the Wolves have downgraded in the coaching department with Rick’s retirement and Flip’s decision to hire himself.

With that said, there is no getting around the fact that Adelman was less invested than usual last year. He was half checked out, and seemed to only have enough energy on the sidelines to bark at refs and shake his head after Rubio mistakes. The players aren’t blameless; not even close. They failed to step up and lead without more explicit directions from the bench. That’s hardly professional of them, and the Wolves — no matter who the coach is — will need better on-court direction, going forward. But from Flip’s bench, they’ll receive more injections of energy and focus. Flip and his assistants — especially Sam Mitchell — seem almost college-coach-like with their passion and hands-on intensity. A young team like this could stand to benefit from this approach.

The older guys may not like it as much. Just ask Kevin Martin, who already over-shared that he won’t be able to get away with the same things that he had been, this year. Okay then.

* Biggest worry about the veterans –> That they’ll play too many minutes, without a real playoff shot

This team has an unusual construction, divided almost evenly between very young, very inexperienced players, and veterans who have had some level of NBA success but are decidedly below “star” status. It makes setting a playing rotation pretty difficult for Saunders. He admitted as much the other day, when he asked each player to write down how many minutes he expected this year, and the numbers totaled 380. (There are only 240 minutes to dole out in a regulation-length NBA game.)

With this in mind, and with nobody (Eds note: LITERALLY NOBODY) predicting a Wolves playoff berth, it would be disappointing to see solid/will-never-be-special vets like Corey Brewer and Chase Budinger taking minutes away from Andrew Wiggins. It’s trickier at power forward, where the position battle includes almost-star-vet Thaddeus Young, and Anthony Bennett, whose disastrous rookie season may preclude him from a current claim for serious minutes. But Bennett was a preseason revelation too, and if he shows early development this year, fans might clamor for him playing more than Young, knowing that Thad can become a free agent next summer.

It’s something to watch out for over the course of the season. Flip gave himself a serious challenge to both develop the talent and remain competitive on a nightly basis.

The Wolves really (really, really, REALLY) need one of Zach LaVine, Andrew Wiggins, and Anthony Bennett to become an offensive superstar, if this #EyesOnTheRise group is to one day contend for titles. It doesn’t have to be this year, or even next. But it has to happen eventually, and it’d be nice to see some flashes, before this season ends. For LaVine, it will take longer than that, and I get that. I’ll be happy if he gets the reps he needs in the D-League this year, and tries to bulk up and learn more about playing guard.

But for Wiggins and Bennett, expectations are higher. They were both drafted top overall and have outstanding physical attributes to work with. Wiggins needs to learn how to get near the basket with the ball and capitalize on his explosiveness. Bennett needs to master his jump shot and punish off-balance opponents with his massive shoulders.

If the Wolves strike out on all three of these guys as offensive playmakers, the rebuild cycle will repeat itself again in 3 or 4 years. I don’t expect this to happen. I remain optimistic about Bennett, and am thrilled to have landed Wiggins in the Love trade. (I’m less bullish on LaVine, but understand the logic of the draft pick. On pure athleticism he’s like a young Vince Carter. That’s worth a home run swing, for a team in the Wolves position.) But one way or another, they need one of these guys — preferably two — to become a stud scorer.

Others have written better about this than I can, so I’ll keep it brief: Flip has built a reputation as a coach who encourages mid-range jumpers, despite the fact that mid-range jumpers are less efficient than dunks and threes.

I don’t want bad perimeter shooters to jack up threes without regard for better alternatives, and if Flip can instill discipline in young players, that’s great. But I also know that the Spurs taught Kawhi Leonard how to shoot corner threes in about half a season (he wasn’t a good shooter in college) and he just won a Finals MVP before turning 23 years old.

Andrew Wiggins needs to be a three-point shooter. Anthony Bennett probably does too. Ditto, Zach LaVine. So if they’re being discouraged from shooting certain treys in games, I at least hope they’re getting tons of reps from 24-feet in practice every day because it’s a necessary skill for most NBA players in 2014.

These are less interesting, so I’ll make them quick hitters:

Dunk Contest?
–> LaVine will win it if they let him in. Wiggins might be a participant.

Team MVP?
–> Rubio. Pek will be more productive, but Ricky will log 9 or 10 more minutes per game, have a bigger impact on defense, and lead most of the offensive sets.

Record?
–> 32-50. I’m tempted to get crazy here and inch toward .500… but the West is just too tough. There will be losing streaks. Probably a couple long ones.

When the season ends, we will feel most pessimistic about…
–> Zach LaVine. I truly think he’s in over his head right now, and that expectations were raised too high by the team’s aggressive PR campaign over the summer and early fall. Some of the more casual fans see that, and the youtube stuff, and expect a good player. And he might become one — just not for a couple of years. He’s like a DeAndre Jordan of guards, if you remember what type of prospect DJ was, and the time it took for him to cash in on his physical tools. So I think the disconnect between LaVine’s readiness as a player and fans’ expectations will naturally cause some disappointment.

When the season ends, we will feel most optimistic about…
–> the return on the Kevin Love trade. I think Wiggins is going to be very good, and possibly great, and I think that he will show us a pretty solid preview of that in his rookie campaign. I think that Bennett is already showing fans why he was drafted so high. He’s big, athletic and skilled. As AB gets more comfortable, finally playing in good physical condition, he’ll generate more and more buzz about his prospects as a go-to scoring forward.

So there you have it, folks. Wolves open up tonight at Memphis.