The Timberwolves’ Unique Opportunity to Practice 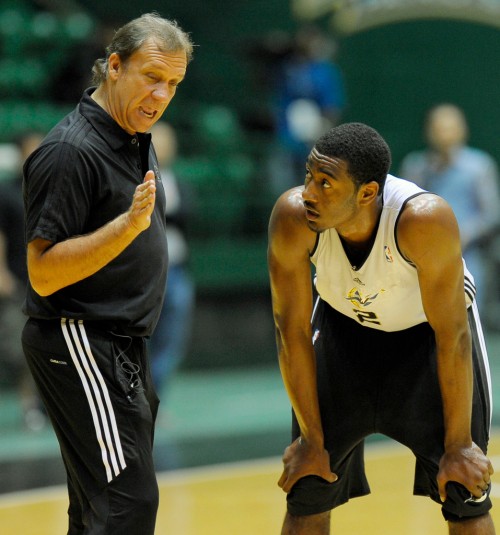 A common complaint made by NBA coaches is that there is never enough time to practice.  The regular season runs 82 games long and includes road trips, red-eye flights, and back-to-back games played without having had enough rest.  On precious off days, coaches are left with exhausted if not injured players.

Once the season gets going, teams have installed their offenses and their defenses. Practice is oftentimes focused on the next opponent, walking through sets and fine-tuning recurring errors. Dinged-up veterans sit out and watch.

Rick Adelman talked a lot about this.  He always seemed excited when, after a game, they had a stretch of days off.  For practice.  Coaches love that shit – it’s when they get to do their job.  It’s when they feel most powerful, and in control.  It’s when they feel most important.  (Believe it or not, most players feel differently.)  And in the NBA, coaches never feel like they get enough practice. Limited practice prevents not only work for the starting unit and its strategies, but it also hinders practice of skills and player development. In The Breaks of the Game, David Halberstam described how the schedule impacted the early struggles of Kermit Washington:

What made it even more difficult was the fact that there is virtually no individual coaching and teaching in the NBA; the schedule is too difficult, the pressure to win too consistently great. There is an assumption that a player arrives in the league in full possession of all the basic skills. Either that or he sinks.

I bring this up now because the Timberwolves have a unique roster construction that may allow them a special opportunity.  You see, the Timberwolves have too many players.  Scratch that–they do not have too many “great” players or talent, but they have too many players who will reasonably expect to see the playing floor, this year.  Importantly, they do not have their own D-League Affiliate, which limits their ability to send unused players down for minor-league reps.  From the looks of it, the Wolves have what sort of amounts to a “first team” and a “JV Team” and everybody is anxious to see how Flip Saunders will go about setting a regular rotation.

Most expect the starting lineup to include Ricky Rubio, Kevin Martin, Thaddeus Young, and Nikola Pekovic.  Whether Saunders will trust rookie Andrew Wiggins with immediate starter duties at the three spot is one of the questions entering camp.  However, in any event, it seems likely that the starting lineup will feature at least four veterans, and the regular rotation will also include Corey Brewer, Mo Williams, and second-year center Gorgui Dieng.  Then there is the other group; the #EyesOnTheRise additions Zach LaVine, Wiggins (if he doesn’t start), Anthony Bennett, and Glenn Robinson III.  The Wolves also bring back young forwards Robbie Hummel and Shabazz Muhammad.  I probably left somebody out.

This second unit is in an interesting situation, because the Timberwolves could reasonably expect to make a long-term investment in a couple of these players.  It would follow, then, that they have an immediate interest in developing them as effectively as possible.  This is especially true for LaVine and Bennett who have certain “upside” qualities that generate excitement among fans and coaches alike.

Perhaps then Flip Saunders should make practice a higher-than-usual priority this year; particularly for this second unit.  Rather than try to find minutes in most games for some of these guys, he should arrange a practice schedule — including on road trips — that works this second team unusually hard to expedite their familiarity with NBA basketball concepts.  Instead of forcing them into games, half-prepared and intermittently, Saunders should demand performance from them in the behind-closed-doors setting of practice.  This brings less pressure from the outside, and allows the coach to impart his expertise to these young, malleable basketball brains.

Saunders could identify a smaller subset of games — maybe 20 or so — throughout the NBA season for each “second team” player to be expected to play a significant number of minutes.  Maybe on a Wednesday night home tilt versus Dallas, Anthony Bennett knows going in that he’s going to play 25 minutes.  He then won’t play for another week to ten days while he practices hard with coaches and young teammates.  Maybe the next Friday, Zach LaVine gets his turn.  After that game, LaVine can have a meaningful film session with coaches going over his mistakes and (hopefully) highlights, and then hitting the practice floor for hours on end over the next week, working to get better.  The next game can be Robinson’s turn.  Shabazz after that.  You get the idea.

This would not only boost the player-development program, but also help keep the veterans healthy and fresh, by loaning out some of their minutes, every third game or so, to an eager youngster.  If all of a sudden one of the youngins is outplaying a veteran starter, he can graduate from JV duty and we’ll all get excited.

A couple of natural questions about this plan:

First, don’t teams already do this? I mean, the veteran starters rest between games while the end of the bench gets work in. Sure. What I’m suggesting is a sharper distinction between the regular rotation and the developmental group, along with a coordinated plan to shorten their individual seasons down to 20-25 games that can be more focused, prepared and meaningful. I don’t consider this a usual scenario, or one that most teams should — or could — entertain, with a normal set of players and expectations.

And second, what if injuries require that some of these young guys play more minutes? You’ve got me there. If the Wolves battle injuries, as every team does, this plan could get thrown into flux. But that doesn’t mean they can’t enter the season with a plan and try their best to stick to it.

Oh, and with all of this PRACTICE?! talk, I’d be remiss if I didn’t link this awesome, funny, and adorable video that friend of the blog, Steve McPherson, put together, with his daughter doing her best Allen Iverson. Link (one of countless, it seems) here.

2 responses to “The Timberwolves’ Unique Opportunity to Practice”