The Kevin Love Trade: How Bad Does Flip Wanna Be? 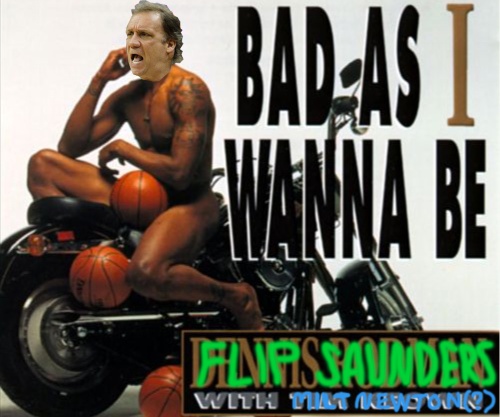 Patrick J: There has been a lot happening around the Wolves over the past week. First, we got word that Kevin Love was likely going to use his early-termination option to explore free agency after the 2014-15 season.

At the same time, there were murmurs that the Wolves were looking closely at former Timberwolves player and Raptors coach Sam Mitchell as Rick Adelman’s replacement as Twolves head coach.

When we last wrote, both of these stories had an air of uncertainty around it. Woj had broken the Love story in one of his “should-I-really-believe-this” megaexclusives. And the Mitchell news crept upon us out of nowhere and felt like a shock to the system.

Since then, the Kevin Love news has only gotten more play, while the Sam Mitchell rumor quickly went away (Eds. Note: There has been some speculation that Mitchell could end up as an assistant on Joeger’s staff) –replaced by the rumor that current Grizzlies coach and Minnesota native Dave Joerger will be the one who succeeds Adelman on the Wolves sideline.

The Inbox below is a list of scenarios that do not seem implausible ways in which the Wolves could decide to go with whatever type of “rebuilding” strategy they will have to do, assuming that Love is traded and Joerger is hired.

Continue reading below the fold to see how we rate them…

Before we bring Joerger into the discussion, let’s get one thing out of the way first: A quick discussion of what a few of the possibly-realistic Wolves rebuilding strategies might look like.

Andy G: In the spirit of this post’s title (and headlining Photoshop!) the first question that Timberwolves Brass needs to ask itself is what its short and long-term vision is; how good — or perhaps — how *bad* are they willing to be in the immediate phase that follows a Kevin Love trade.

NBA teams and fanbases view this question differently, depending on a variety factors that includes but is not limited to: recent success or failures; ownership personalities and goals; market size; potential success in the free agent market; current roster makeup; and overall intelligence.

The Minnesota Timberwolves enter this rebuilding scenario in a unique set of circumstances. They have missed the playoffs in each of the past 10 seasons. From 2008 through 2010 they put together one of the worst three-year stretches in league history. (It might be *the* worst. I didn’t check.) So the fans are not at all interested in a full “bottom out” strategy that would require watching a steady supply of double-digit losses, quick coaching turnover, and on-the-job training of 19-year old rookies handed outsized offensive roles. Going FULL REBUILD would risk losing the fanbase that remains in Kevin Garnett’s wake.

But they also have to consider that Minneapolis and this organization are not going to attract *superstar* talent via free agency. The NBA Draft Lottery is the only available route to replacing Kevin Love with a player or two that can anchor a title contender. So getting a little bit worse, in the short term, could provide long-term benefits. As long as they don’t waste the draft pick(s) on bad player(s). Hold your Timberwolves jokes.

Anyway, the Wolves were 40-42 this season WITH Kevin Love. When he was on the bench they were outscored by 5.6 points per 100 possessions. (For a reference point, getting outscored to that extent qualified for 5th worst in the NBA, last year.)

How much worse is too much?

Patrick J: How bad do you wanna be, if you’re the Wolves, entering a post-Kevin Love era? From a purely rational perspective, you know you’re probably going to get immediately worse without Kevin Love. But you might be able just to get a little worse, if you fill existing gaps with (better) role players, some of whom would be veterans.

However, you also have the option of going young, dealing mostly for draft stock and young, but unproven, talent, which may or may not pan out. And if it would pan out, it would likely have a higher return on investment (and at a lower short-term cost) than the “play it safe” angle.

It seems like if you’re the Wolves, your choice basically boils down to two things: (1) Can you be a fun/likeable (but bad) team in the beginning, while you know you’re going to be much worse than you were previously? This is necessary to keep attendance and other interest in the team at tolerable levels; and (2) Assuming that attendance will not drop severely after the initial one-year honeymoon, can you expect that squad to make good-enough strides toward being an acceptably good NBA team  in terms of the W/L column to maintain fan interest, while also bringing you closer to League-wide competitiveness?

If not, you become mired in Milwaukee and Cleveland territory, where your young, rebuilding, team looks in hindsight like the worst-possible set of choices and investments you could have made with what might’ve been some of your last assets of real value.

This is a difficult (or, possibly, easy) set of questions to answer if you are Glen Taylor. It looks like you’re going to hire an established (but still young) NBA coach at a competitive salary. You’ll probably need to lock him in for at least 3-4 years. But if you’re really bad, you might end up firing him, and getting stuck paying his check. You want the team to be great and to take a strategic perspective, but you’re faced with the realities of having to put a team out there that will lose you only an acceptable amount of money each season, such that it doesn’t become an unkeepable liability.

Looking at it through those lenses, don’t you want to take the low(er)-risk choice of trading for some established guys like David Lee and Klay Thompson, maybe with Harrison Barnes as part of the deal, as opposed to risking everything on a very uncertain return like the one Cleveland’s assets could bring? (READ: perhaps Tristan Thompson, the #1 overall pick, and Dion Waiters.) Sure, maybe one isn’t really all that excited with the Golden State take, but you probably still win close to 40 games a season for the next 3-4 seasons with a Rubio/Thompson/Barnes/Lee/Pekovic lineup.

On the other hand, people’s interest will be fully piqued if you sell Love for the #1 pick and Cleveland’s bits, because you’re basically banking on the #1 being a Kevin-Love-caliber player, maybe two, three, seasons down the road–and thereby becoming giving you a better chance of becoming an upper-level playoff contender, if the player is also more skilled at winning than Love.

From that perspective, you have to have a lot of faith that Wiggins, Parker, or Embiid, has the talent and attitude to become a top-5-ish player fairly soon. Because if they don’t, you have basically nothing else to fall back on, and you’re in basketball-owner purgatory until forever.

Does this make sense?

Andy G: Yeah, that is basically the dilemma. I think Rubio, Pekovic, and maybe even Gorgui Dieng are good enough players that — paired with the overpaid-but-competent supporting guys acquired by Flip Saunders — the Wolves will not completely “bottom out.”

That’s why I’d prefer the Cleveland/Andrew Wiggins deal to the Golden State one. I think a good coach like Dave Joerger would find the right ways to develop a raw potential superstar like Wiggins (or Parker) in the context and environment of a team that is trying to win. Like the Pacers did with Paul George and the Spurs did with Kawhi Leonard. Oh, and like the Wolves did not do with Wesley Johnson. (To be fair, Wes couldn’t/can’t dribble, which was a contributing factor to his failures, putting it mildly.)

But I’d also prefer the Wiggins deal because it could likely include Anthony Bennett, as well. Rather than write out the reasons why Bennett can become very good despite a terrible rookie season, I’ll just link David Thorpe’s TrueHoop video, which hits the key points. Cleveland might include Bennett in a trade because he disappointed as a rookie, he plays the same position as Love, and the salary for the top overall pick (yes, even on the rookie scale) is larger than you might think.

Putting together a young core of Rubio, Wiggins, Bennett and Dieng, with Pekovic and Martin around for shorter-term stability, seems like the best way ahead.

But then again, it’s hard to see Cleveland dealing the Number 1 for Love without some serious assurance from his camp that he will re-sign there. Basically, we need some Kyrie-Kevlar Collusion, sponsored by Pepsi.

Outside of Golden State and Cleveland, any potential suitors that could provide Minnesota with something to get excited about?

Patrick J: Meh. Frankly, no team stands out as the kind of potentially-interesting trade partner that the GSW or Cavs do. Specifically, not the LA Lakers. ESPECIALLY THE LAKERS. They basically have nothing we want. No Gasol. No Swaggy. No real assets there.

I know the national media wants to concoct ways that LAL could pull off a deal for Love. Don’t believe it. Unless Love says he won’t sign with anyone but LAL, he’s not going there. And if he did do that, and I’m Glen Taylor, I’d be tempted, out of spite, to let him walk for nothing for doing you like that.

So, the one place that *is* somewhat interesting is Chicago. Several years ago, I wanted the Wolves to draft *and keep* Mirotic because he looked like a star in the making. We traded him for nothing as part of David Kahn’s binge-trading sesh to fundraise for Kurt Rambis’ buyout. Now we might have a chance to trade a top-10 player in the League to re-acquire him!

Here’s the thing: I think that Mirotic *does* have real NBA star potential. Will he be a franchise player? It’s really, really, hard to tell. If forced to guess, I’d lean toward “probably not.” But if you’re getting Mirotic-type talent, along with other nice pieces like Taj Gibson and possibly Jimmy Butler or a first-round pick, well, you could do a lot worse. (*Ahem, cough, Lakers, cough, ahem*)

Andy G:  I don’t hate that Chicago proposal. I actually do kind of hate the Houston possibility. The best potential assets we’d gain are Chandler Parsons and Omer Asik. Parsons is pretty good — maybe comparable to Klay Thompson in many ways. But I just don’t really want him on my favorite team for (un)coolness reasons. Asik just isn’t needed by a team that already has Pekovic and Dieng. Any draft picks that Houston could include would be mediocre.

I don’t see it with Houston.

Anyway, I’m sure there will be plenty of trade rumors in the coming days. We’ll have to wait and see how bad Flip is willing to be when he ultimately pulls the trigger.

4 responses to “The Kevin Love Trade: How Bad Does Flip Wanna Be?”