Report: Timberwolves Prowling in the House of the Rising Suns 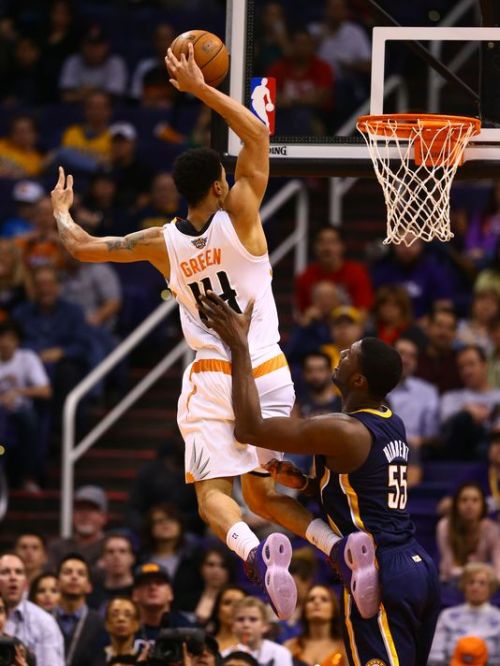 The Timberwolves take on the playoff-bound Phoenix Suns  tonight in Phoenix. Tip is at 8 P.M. CST. You can see it on FSN or League pass and, as always, hear it on WCCO 830.

I have to drive down to Washington, D.C., later this afternoon, so this will be brief.

A few quick notes, below the fold.

It remains unclear as of noon whether Pek and/or Kevin Martin will be back tonight. It’s unlikely, at best: ESPN has both listed as “Out”; NBA.com says their status is unclear. Pek was reportedly getting close to being able to return for the last week, so he’s probably the more likely of the two to play. However, with the Wolves’ playoff hopes getting smaller and smaller in the rearview mirror, the team might decide to be cautious with Pekovic. If that’s the case, it’s anyone’s guess when either he or K-Mart would return.

These guys are really fun to watch. Dragic is the biggest part of the Suns’ feel-good story this season. He plays a lot like we wish Ricky Rubio could, as a jack-of-all-trades classic point guard AND a solid marksman. Dragic should’ve been an All-Star.

Here’s what Dragic did to the Wolves in the two teams’ last meeting, on January 8 at Target Center, en route to 26 points and 9 assists in a Suns victory.

With rising star Eric Bledsoe out for much of the season, former Timberwolf Gerald Green has filled in admirably at the shooting guard position. Green is averaging 15 points per game, on the season and making threes at a 38% clip. February has been Green’s best month this season: He’s put up over 18 ppg and made threes at just under a 40% clip. That’s not bad for a former prep-to-pro player who found himself in Siberian exile after a few seasons of lackluster NBA performances and did a tour in China along the way.

Here’s what Green did to the Wolves the last time he played against us:

Green should’ve been in the dunk contest during All-Star Weekend. Damian Lillard shouldn’t have. (Eds. Note: Take that, BlazersEdge fanboys.)

The Wolves will need to defend stretch big Channing Frye better tonight than they did on January 8. The Wolves’ bigs continually failed to close on Frye, who torched the Wolves for five threes (in seven attempts) and scored 22 points on the night. Don’t let Channing Frye be a menace, fellas.

That’s all for now – time to hit the road. Enjoy the tilt.

In the meantime, here’s some Gerald Green dunk pron to pregame to.

And a 1976 Animals live performance of House of the Rising Sun.

5 responses to “Report: Timberwolves Prowling in the House of the Rising Suns”