Okay, so there’s a bunch of stuff to review. Let’s cover it by way of an INBOX to flesh out some of the ideas and knowns and unknowns.

Andy G: First reaction would be that last night’s game is a microcosm of the Kevin Love Era of Timberwolves basketball. Love put up Chamberlainian NUMB#RS in a losing effort to a “decent” team. No exaggeration here: Love dropped 43 and 19. In a loss. To the Hawks.

I’ve seen this movie before. It’s not a good movie.

The Wolves aren’t very good defensively. (Duh.) Yeah, they’re smart about not fouling too much and their efficiency stats are pretty decent. (They remain 11th ranked in the league.) I tried to think of a way to capture what I feel like is the truth (the Wolves stink on defense, despite the overall efficiency metric that says otherwise). The best I could come up with is to filter by 4th Quarter defense in losses. The Wolves have too many blowout wins (and almost no close wins) to make their fourth quarter performance a reliable measure of anything. But they have 24 losses in 47 games, and a great deal of those were games that the Wolves *could’ve* (should’ve?) won.

Last night, the Wolves scored a ton in the fourth quarter. 38 points. That should’ve been enough to come back and win, but they allowed the Hawks — THE HAWKS! — to score 34 in the same period.

I don’t have it in me to dig into more detail than that. The roster just isn’t built very well, right now. There are too many one-way players. I’m not even sure there’s a single “two-way” player on the team. That makes it hard to win against good teams, or build anything resembling a sustainable formula for success.

So, there’s more to it than that – what of the Adelman-Rubio-Barea dynamic that’s been overshadowing backcourt rotations lately?

Patrick J: So, Adelman has not shown a lot of trust in Rubio down the stretch. And why should he? Ricky has been so bad during #winningtime that we’ve personally wondered whether, in today’s NBA, it’s possible to have the analogue of an MLB “closer” to finish off games that Ricky has started and left whilst the Wolves are still in the black.

But J.J. is eternally either Good or Bad, and one never knows which side of Schizophrenic J.J. they’re going to get durin #winningtime. Last night, Catastrophic J.J. came out, got ejected in a classic J.J. Meltdown, and disrupted the entire flow of the game in the second half. You can’t tell me that this is the Wolves’ designated closer. That’s like having John Rocker as your closer and pretending that you’re serious about finishing games efficiently.

So, the big question: How can Ricky, or somebody else, be entrusted to give the Wolves more consistent late-game play?

Andy G: Ricky’s their best bet, right now. Even if he struggles (mightily) to make shots down the stretch of close games, he’s equally difficult to score against. Last night, there was a stretch of possessions where, one way or another, he just kept taking the ball away from the Hawks. So there’s obviously value in his defense (particularly in light of the team’s crappy fourth-quarter defense, mentioned above). But they do need to come up with a better plan for late-game sets. I guess I’d like to see more pick-and-roll, just because it doesn’t rely so heavily on Love making difficult shots.

But yeah, until they have a better alternative to Rubio than J.J., they can’t really go with a different closer. Rubio’s overall contributions are the best option on this roster.

Speaking of guys that would be fun to watch on offense during #WinningTime, Kyrie Irving has been in the news. Specifically, the Dumpster Fire that is the Cleveland Cavaliers organization has been in the news, with multiple reports suggesting that Mike Brown has lost all control of his locker room, and varying versions of Kyrie Irving being unhappy, disinterested, or both.

We’re on the record as HUGE Kyrie fans.

He still has his restricted free agency ahead of him, which makes it seem very unlikely that his team would trade him.

But might there be *some* offer that Dan Gilbert would accept — in a Comic Sans letter, of course?

Patrick J: Methinks it’d take an offer of Rubio and Pek for Irving and Anderson Verejao – which I’d be comfortable with. Why would I be comfortable selling on two of my favorite Wolves players in recent memory for such a deal? Two reasons.

First of all, I think that Irving and Love would, well, *love* playing together, and understand each other’s perspective. If there are two young players whom I believe are image conscious, have a chip on their shoulder, but still want to win, it’s Kevin Love and Kyrie Irving. (Eds. Note. They looked pretty dope in this dry run.)

Second, I think that Kyrie Irving would solve a lot of the problems the Wolves currently have. He’s an A1 scorer, top dog kind of guy, who can get and make big shots when necessary. The Wolves currently have an alpha dog in Kevin Love, but they lack that player who can score at any time and in place – in particular, when the game is on the line. Welcome, Kyrie Irving.

Losing Pek would be difficult, but Anderson Verejao is bigger, an incredibly physical rebounder, and an imposing defensive presence. Given how Irving’s strengths offset a number of the Wolves’ current weaknesses, I’d ABSOLUTELY make this bet.

What do you think?

Andy G: First, we should verify that this trade is even allowable under the cap rules.

*runs over to trade machine…* 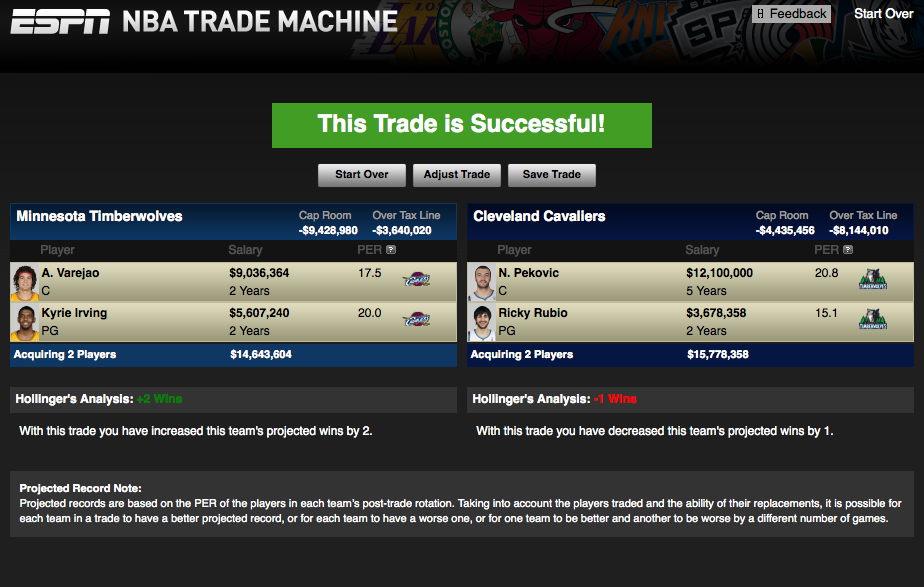 Looks like a winning trade idea to me. (And Hollinger!)

I doubt the Cavs agree to this, unless things have REALLY gone south with Kyrie and the organization as a whole. (More likely is that they just fire the coach, the GM, Dion Waiters, and anyone else not friendly with Uncle Drew.)

Also, I’d hate to see Pekovic and Rubio go, when it’s not clear that Kevin Love will stay beyond next season. That’s a gamble. But yeah, getting Irving back in return would be sick.

I suspect any Cavs fans reading this would not like the idea.

So, to wrap this up, the Lakers come to town on Tuesday. Many are speculating that Love is headed to Tinseltown at his first chance, in the summer of 2015.

Might it be a good time to shop him for Kendall Marshall and Wes Johnson?

Just messing around. We’ll have a preview up on Tuesday.