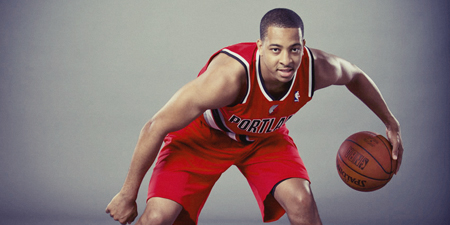 Wolves fans will get their first look at Blazers rookie C.J. McCollum in tonight’s game at Portland.

Tonight the Wolves face the Portland Trailblazers in the City of Roses. Tip is at 9:00 P.M CST. You can see it on NBATV.

It’s set to be a *very* interesting game. Find out why below the fold.

The Wolves are now on a three-game winning streak – their first such streak starting the season 3-0. Now 21-21 on the season, the Wolves need to keep winning games to claw their way back into contention for a Western Conference playoff spot. They’re currently 10th in the Western Conference, 2.5 games behind the Dallas Mavericks, the team currently in the 8th slot, which is the cutoff for making the playoffs.

Andy mentioned in his GSW game wrap that winning games such as last night’s can restore team morale and improve team cohesion.

So too can winning streaks. Knowing – nay, *believing* – that you can reel off win streaks that include games against tough opponents in their gyms can only foster the construction of a team “identity” that so many Wolves players and coaches have lamented as lacking earlier in the season. Winning tonight would certainly advance that process.

A win tonight at Portland would be especially important, and satisfying, because of the Wolves’ opponent – the Portland Trailblazers. It’s the closest thing the Wolves have to a real rival. The Wolves decimated the Blazers 120-109 in their first meeting this season, which was played at Target Center. The game was not as close as the final score indicates. The Wolves outclassed the Blazers, who had the best record in the League at that point. The Blazers were playing their fourth game in five nights and were flat.

Nonetheless, the Wolves were the dominant team throughout. It felt like a statement win that could help catapult the Wolves toward the upper tier of the Western Conference. But the Wolves’ subsequent struggles revealed that, to paraphrase Marcellus Wallace in Pulp Fiction, the team was “pretty f*ckin’ far from okay.”

Beating the Blazers tonight offers another opportunity for redemption, team-building, and (finally) pushing their season record above .500.

Love versus Aldridge is a power forward matchup for the ages. There’s endless debate about which is the better player, and about which is the more valuable player. Love is known as the League-darling stat-stuffer. Aldridge is known as the quiet winner. The flames of the Love-Aldridge debate were fanned this week when Love was announced as a starter on the Western Conference All-Star team. Blazers fans were incensed that Aldridge didn’t get the nod.

Who gets the edge in tonight’s matchup might depend on Love’s health: He injured his left ankle and his right knee during last night’s game. Both injuries are surely more sore, swollen, and  stiff today than they were last night, when adrenaline flowed through the fourth quarter.

Still, assuming Love starts tonight’s game, keep a close eye on his ability to move and put weight on both legs.

This rivalry exists almost solely in the minds of Timberwolves fans, many of whom wanted the team to pick McCollum at #9 in last summer’s NBA Draft. I was among them. Instead, the Wolves traded down to #14 and selected Shabazz Muhammad, much to Wolves fans’ consternation.

It will be a good opportunity for Wolves fans to scout McCollum’s pro game and to get a sense of how he might have fit into the Wolves’ plans had we selected him.

Here’s some McCollum clips to pregame to.