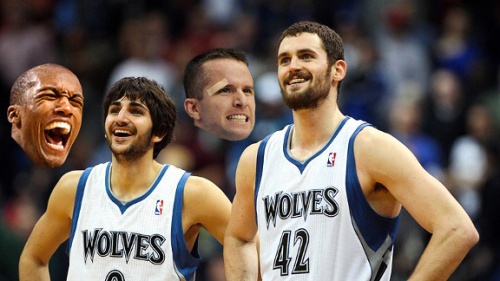 It wasn’t weird because of the result; a blowout Timberwolves win over an overmatched, Eastern Conference opponent at Target Center. That’s a common occurrence this season.

It also wasn’t weird because of how that favorable result came to be. Nikola Pekovic dominated in the paint. Kevin Martin made jumpers. Ricky Rubio ran the offense and played pesky defense. Kevin Love did a little bit of everything. The bench kicked ass. (Okay, that part was unusual.) Overall, the winning formula looked familiar to fans.

The game was weird because — heading into it — it was impossible to know what the ideal outcome was.

Personally, I was hoping it wouldn’t be a blowout win. I didn’t want the Wolves to lose — they can’t afford to blow any more easy wins — but I wanted them to struggle for the victory. That outcome, I thought, might attach more meaning to the turmoil surrounding Love’s post-Suns-game remarks.

I don’t necessarily agree with what he said about J.J. Barea and Dante Cunningham. This is the NBA after all, and there are way too many players, coaches and water boys for everybody to huddle up and listen to the coach. Many times, little to nothing is even said in a huddle. Who cares if Barea and Cunningham stay in their seats and cool off when they’re upset?

But Love decided to throw those two under the bus. Backlash and turmoil ensued. Rick Adelman canceled Thursday’s practice, presumably to avoid extra media attention to what he considers an unnecessary distraction. The team was under .500 after 35 games. The possibly-Kevin-Love-involved trade deadline is only six weeks away.

In his interview with Flip Saunders, Britt Robson asked the Wolves GM about the team’s chemistry and specifically why it seems to struggle to motivate itself.

Part of it is I think when you are a team that has not had success, continued success, and maybe many times over the past seven or eight years you have relied on moral-type victories, that is tough to overcome. Because when you have a victory or two, you start feeling very comfortable. When I came here, someone from the organization came to me and said, “You’re going to love our guys. It is the greatest group of guys and we have no problems with them. They are fun to be around and they don’t argue.” And I said, “That might be a problem.” Because sometimes you need to have at least that one guy who is kind of out there who has that tough personality and brings a little of that grit.

That answer was given before Wednesday’s events.

I made a similar observation in our season preview with a half-serious comparison to Mikey in Swingers. Basically, the Timberwolves could afford to be a little bit meaner. Even to each other.

Ever see LeBron scream at Mario Chalmers or glare at Drew Gooden? Me too. MJ berated teammates and even punched Steve Kerr. Kevin Garnett isn’t nice. Neither is Kobe. There’s a line somewhere, but these Timberwolves are way too far away from it.

We remember when Chris Paul — perhaps the angriest superstar in the game today — physically removed the ball from Kevin Martin’s possession to force overtime and snatch an unexpected victory from the Wolves. That play, perhaps more than any other, represents the problem. There’s a healthy amount of rage in playing sports and this team seems to lack it.

With all of that in mind, I thought Love’s gripe, however misplaced or selfish-sounding, might serve as a rallying point for the rest of the season. It might cause Love and Barea to yell at each other and that might be a good thing for the team. And I worried that a business-as-usual blowout over a crappy Bobcats team might set the turmoil in the rear view mirror just a little too quickly. There is a cliche’ that goes something like, “If you’re not getting better, then you’re getting worse.” And in the Wolves case, trouncing Charlotte at Target Center is not a sign of improvement. Struggling wouldn’t be either, obviously, but it might help uproot this team’s major malfunction that causes it to underachieve, as it has thus far.

I guess this is a long way of saying that last night’s game was mostly a no-win situation, aside from the incremental bump in the standings and a record once again split evenly between wins and losses.

The Wolves travel to San Antonio for a game tomorrow against the conference-champion Spurs. In that game, they can certainly impress me with a win. No matter how it comes.