Is it time to press the panic button? 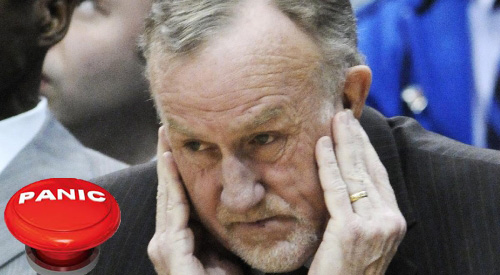 This is not how they wanted to enter the holiday. Having lost four of their past five games and with a brutal four-game stretch after Thanksgiving, the Timberwolves needed to win at home against the Denver Nuggets. Although Brian Shaw’s team came in riding a three-game winning streak (to say nothing of the 57 games they won last season, before significant off-season shakeups) and had already beaten the Wolves once this year, it was a game that Minnesota needed to win if it wanted to continue the early-season positivity giving rise to expectations of an overdue playoff berth.

As you probably already know, the Wolves did not win. In what was possibly the worst defensive performance of the season the Wolves lost 117-110 on the Target Center floor against a team that they’ll almost definitely need to be better than, in order to crack the Top 8 of the Western Conference. In the game’s early stages, Ty Lawson and Wilson Chandler made shots. Some were contested better than others. But as the game went on, the Wolves defense softened up considerably, allowing a mixed bag of wide open threes and wide open layups and dunks. Denver ended the game 8 for 16 from downtown. In the fourth quarter, they didn’t have to rely on threes as they managed to get to the rim almost at will. Three consecutive crunchtime possessions ended with Denver dunks.

After the game, Adelman lamented the surprisingly-poor effort:

“I was just really disappointed with our effort — the first half especially. We just, defensively, we allowed them to do whatever they wanted to do. Everything we had on the board, they did. We gotta figure out what we’re gonna do from this point forward because you can’t defend like that. We can’t have the energy coming into a home game like that.”

“We were so passive. We have to get more aggressively physical if we’re gonna play in this league.”

The Wolves are now 8-9 and under .500 for the first time all season. They’ve lost 5 of their last 6 games, only beating Jason Kidd’s embarrassing Brooklyn Nets. Their next game is at Dallas, versus the 10-6 Mavericks. Dirk’s boys are 8-1 at home. After that is a matchup with Kevin Durant’s Thunder in Oklahoma City. The Thunder is undefeated at home. It’s then off to Mexico City for a “home” game against the 13-2 Western Conference Champions from San Antonio. And finally, it’s back to Target Center to host the two-time defending champs from Miami.

After this fearsome foursome the Wolves will be lucky to be 9-12. Chances seem good that it’ll instead be 8-13. Keep in mind that the eight seed in the Western Conference typically wins between 45 and 50 games, which ranges from 8 to 18 games over .500. Climbing to those ranks from 5 games under would be a serious challenge for a struggling team, even with 61 games to go.

Is it time to press the panic button? What would that mean in this context?

After the Knicks 3-8 start, J.R. Smith drew some laughs across the internet when he admitted that he was panicking. Webster’s defines panic as “a state or feeling of extreme fear that makes someone unable to act or think normally.” That seems counterproductive. If that’s what we’re talking about, Rick should hold off on pressing that red button.

But another definition of panic is “a situation that causes many people to become afraid and to rush to do something.”

This one could be applied two different ways to the T-Wolves’ predicament and at least one of them is probably a good idea.

The Wolves commit 18.1 fouls per game, which is the second fewest in the league. They allow just 18.3 free throw attempts per game, which is also second fewest in the league. (San Antonio ranks first in each category.) Fouling in and of itself is not a good thing. In fact, the Wolves ability to defend without fouling has been a primary factor in the surprisingly-good start to the team’s defensive season. Fouling puts opponents in the bonus, which causes both opponent free throw attempts and — in turn — tentative Timberwolves defense. If star players get in foul trouble, they sit on the bench.

But there seems to be a trend developing where Wolves opponents get whatever shots they want. It was certainly the case last night; a night when the Wolves were at home and with a day’s rest. We like to think that one hot night for Randy Foye or Nate Robinson (or Aaron Brooks or Martell Webster) is just bad luck. I just kind of doubt that good defensive teams — and coaches of good defensive teams — feel like their fate is out of their control. They feel like they have a hand in the results of what their opponents are trying to accomplish with the ball.

So one way to press the panic button in a positive way would be to play defense a bit more recklessly and a bit less carefully. For Rubio and Brewer, maybe that means gambling for more steals. For Love and Pekovic, maybe that means hedging harder on ball screens, and pushing harder for position. Do something to dictate the flow rather than simply standing, watching, and not fouling. When you factor in that some of the early season front running was built around transition offense, an uptick in defensive pressure might have an exponentially positive effect on box scores.

The second interpretation of the panic-button metaphor would be Rick Adelman showing more trust in his bench. This one is more controversial and I don’t know if it’s even a good idea. Near the very top of the Canis Hoopus comments section, Nate in St. Paul does a great job of highlighting how much the Wolves rely on their starting five compared to the rest of the league. The starting five has played 365 minutes this season. The next-most used lineup? Just 34 minutes. And that one is the starting five with Dante Cunningham subbed in for Pekovic. The next one after that? Just 23 minutes, and includes Rubio, Love and Brewer.

Adelman isn’t using a bench. And in turn, the bench is playing like shit. Is it the chicken or the egg? Would more faith in a second unit, over the course of increased sample size, lead to more consistent second-quarter production? Would more rest for the starters improve their defensive effort? Would playing some reserves like Gorgui Dieng, who don’t worry about their own foul trouble, help set a defensive tone where opponents don’t feel like they can pick whatever spot they like, on a given possession?

Derrick Williams was just traded for Luc Mbah a Moute. Chances seem good that Luc will get a chance to prove himself as a worthy rotation player. Consider what Adelman said after last night’s loss:

“We had guys off the bench, the same thing, that came in and it’s just like, they weren’t ready when they came in the game. And I talked before the game about trying to find some solution off the bench and it wasn’t there tonight, so we have to figure it out.”

“We’ve gotta find a way to get a crew out there that’s going to come in and really compete. And I think we can do that, but it’s going to take us some time.”

What if Luc has a bad game. Or (gasp) two bad games? Will Rick pull the plug on him, and leave him trying to prove his worth in 4-minute spurts every third game?

It very well might be that the Wolves just lack depth from a talent perspective and riding the starters as hard as possible is the best ticket to winning. In fact, that probably is the case. Adelman knows his team. But if the losses pile up here, it might be time to renew last year’s faith in Shved. Or Give Bazz a Chance. Or throw in Gorgui for some hard fouls.

To press the panic button.

4 responses to “Is it time to press the panic button?”