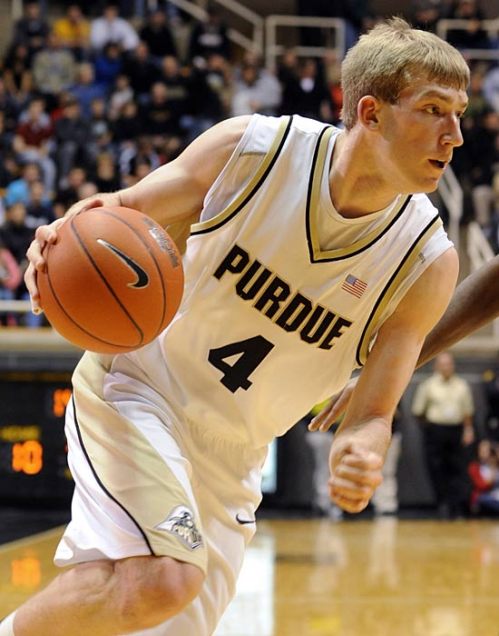 Minnesota sports fans remember Robbie Hummel from his days as a Purdue Boilermaker who frequently dominated the Gophers. Now on the Timberwolves, he appears to have cracked Rick Adelman’s regular playing rotation.

In forecasting this Timberwolves season, pundits came to a broad consensus about strengths and weaknesses. With the acquisitions made at Flip Saunders’ direction the Wolves would be a team that plays fast, scores a lot of points, but would struggle to defend their own basket. If you asked me before the season to describe what a “typical loss” would look like for this team, my answer would’ve resembled last night’s game at Denver.

The Wolves lost 117-113 to a mediocre Nuggets team that no longer has Andre Iguodala playing or George Karl coaching, and is currently without Danilo Gallinari, who is recovering from knee surgery. But they still have Ty Lawson, who is still incredibly fast with the ball in his hands. They still have Kenneth Faried, whose trampoline-bounce rebounds are much more different in style than substance from our own Kevin Love’s. And they still have Professor Andre Miller, whose skillset seems immune to the normal aging process.

Denver scored 35 in the first quarter, 30 in the third and 31 in the fourth. Had we not seen the absolute best version of the ever-unpredictable J.J. Barea, this game would have been a rout. Barea scored 21 points off the bench on 10-14 shooting and dished out 4 assists for good measure. It’s his second good game in a row, and immediately follows my harshest criticisms of him since he’s been here. (I vented with some player-tracking data in Britt Robson’s comments section the other day about how sick I am of watching J.J. dribble the air out of the ball.) While J.J.’s huge game off the bench helped offset some others’ struggles (Ricky Rubio didn’t score) it did nothing to stop Denver from scoring.

A very late Wolves rally cut the deficit to 2 points after a Kevin Love three. Wilson Chandler was sent to the line where he made the first and missed the crucial second; a miss that gave the Wolves a chance to tie. Only it didn’t, because Andre Miller [illegally] creeped into the lane from behind Chandler to secure the offensive rebound and the win. A little kick to the ribs when we were already down about losing a winnable game. Denver isn’t very good right now and the Wolves had enough things going on offense last night to leave the Pepsi Center 7-3 instead of 6-4. It’s the type of loss that can’t sit well with Coach Adelman who certainly appreciates how difficult it will be to lock up a Western Conference playoff seat.

Some other Wolves jottings:

While Kevin Martin’s return to the lineup (flu) sent Robbie Hummel back to the bench, he is still a part of Adelman’s rotation; one that only went eight players deep in last night’s game. Alexey Shved’s demotion to the end of the bench is not unexpected. He has struggled mightily to play off the ball, and Adelman clearly has more faith in Barea to back up Ricky at point. But the DNP-CD’s are more conspicuous in the case of Derrick Williams, the lottery pick whose struggles to find a true position have certainly dropped his value to near nothing in NBA trade-talk circles.

Hummel logging minutes over Derrick Williams is interesting for a few different reasons. First and most obvious is that Williams was drafted second overall in 2011, and carries much more weight of expectations from fans. Hummel was barely drafted at all, selected 58th by the Timberwolves in 2012. He was a phenomenal college player at Purdue, but has suffered multiple ACL tears in his knees that called his entire future as a basketball player into question. It’s safe to say fans have limited expectations of Hummel and what he might contribute in NBA games. But beyond the draft position, there are some key differences between these two. Williams is an explosive leaper capable of highlights and occasional shows of dominance against certain types of defenders. Hummel is decidedly not explosive, but simply stands in the correct places, holds the ball in a strong triple threat position (an underrated and necessary skill that many otherwise promising players seem to lack) and can make an open shot without any hesitation off the catch.

Right now, with a small data sample, Hummel playing correlates with Timberwolves success. With Hummel on the floor the Wolves are 3.0 points better than opponents per 100 possessions. (Interestingly, Hummel has both the team’s best offensive rating and worst defensive rating. This is likely due to small sample size, but it is possible he will continue to correlate with a lot of points scored on both ends.) This “net rating” is lower than most of the team’s best players (Love, Rubio, Martin, Brewer) but it is slightly ahead of Nikola Pekovic (+2.7) and is much better than Williams. When D-Thrill takes the floor the Wolves are 6.6 points worse than opponents. (Shved, in more limited and spotty minutes, has a catastrophic net rating of -21.2.)

There was some Twitter discussion about Williams versus Hummel after last night’s game.

Zero minutes for Derrick Williams. His up-and-down minutes situation must fruatrate him. I know it'd trip me up.

@BreakTheHuddle He's not been good. Course, same can be said about most of the reserves. Think RA prefers low mistake.low impact for bench.

@RTM59 @PDWolves @BreakTheHuddle Not getting in the way or making poor drives to the basket. Or ball stopping. Low impact, low mistake.

@RTM59 @BreakTheHuddle @canishoopus he's not disruptive. Derrick intervenes in what could be ideal ball movement.

I think that mostly captures it. Robbie isn’t going to do very much by way of initiating offense. But he also won’t screw it up. In last night’s game he had the only positive +/- on the team (+2) despite scoring 0 points. If Hummel can be a positive correlation guy without any significant production of his own, that will be enough to give him Williams’ spot. The Wolves simply can’t afford to allow on-the-job training this season, whether it be Williams at the 3 or Shved at the 2.

All Wings Are Not Created Equal

A weird little statistical oddity after 10 games: From three-point range on the left wing, the Wolves are shooting 44 percent (44/100). That’s obviously great. But from the right wing they both shoot less often (55 attempts) and much less accurately, connecting on just 21.82 percent of attempts. We’ll see if this continues throughout the season. Last year, Derrick Williams was much better on the left side than the right, and it appears his condition might be contagious.

The Wolves host the Celtics tonight at Target Center. Both teams played last night in other cities so there shouldn’t be a rest advantage. Boston is obviously rebuilding and is still without Rajon Rondo, who continues his recovery from ACL surgery. But the C’s did pull off a four-game winning streak that included a buzzer-beating victory at Miami. Coached by Brad Stevens of Butler March Madness fame, this new-look Celtics team might be a little bit better than most anticipated.

Boston has fared better on defense (ranked 11th) than offense (22nd) in the season’s early stages. Their scoring attack is extremely balanced and led by Jeff Green’s 16.8 points per game. Following Green are Jared Sullinger (13.1) and full-court defensive ace Avery Bradley (11.9). Jordan Crawford will take some hilariously-bad dribble jumpers that will instantly become less hilarious if they start falling. (And they might.) Oh, and Gerald Wallace plays for this team. He used to be really good and he makes a lot of money. For whatever reason he’s only shooting 4 times per game.

Simply put, it’s a game the Wolves need to win on their home floor. The Celtics have some solid rotation players but nobody capable of leading a credible offensive attack. If last night’s loss was an eye opener for the defense, perhaps a renewed focus can keep the Celtics under 90 points tonight and give the fans an enjoyable win to watch.

One response to “Saturday Post: Denver Disappointment, Hummel vs Williams, and Wolves-Celts Preview”