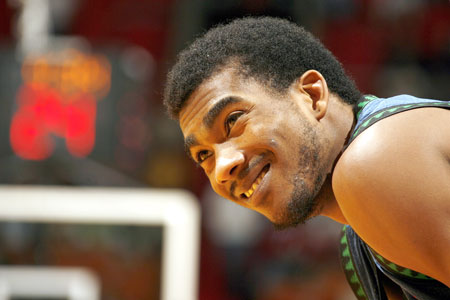 Corey Brewer went to The State Fair today. @TWolves_PR covered it in detail, hashtagging #BrewerOnAStick through Corey’s adventures around The Great Minnesota Get-Together. If there was an unofficial “welcome back” for Brew, this was probably it. Brew is not a star player and never will be, but it’s hard not to spew positive thoughts when talking about the guy. He always smiles, he works as hard as any player you or I have ever seen, he owns a goat, and he unquestionably demands that most intangible of characterizations:

While Brew has a funky release on his jumper and a handle so shaky he was once coined De Drunken Dribbler, (not sure, but I think this was by the legendary MAYNHOLUP of Canis Hoopus) he has a work ethic and maybe even an aura that just inspires confidence in the belief that his team is going to end up on top.  His first stint on ‘Sota aligned perfectly with the nuclear blow-up of the roster ignited by the Kevin Garnett trade. KG left, Al Jefferson and friends (Ryan Gomes, Sebastian Telfair, Gerald Green, Theo Ratliff’s Expiring Contract, Not Rajon Rondo… who am I forgetting?) came in.  Even the winningest of winners would’ve been powerless to turn that lottobound train wreck into a playoff contender.

So let’s think about the before and after.

Before, Brewer won back-to-back NCAA championships with the Florida Gators. He was named Most Outstanding Player of the 2007 Final Four.

After, Brewer immediately won an NBA title with the Dallas Mavericks. No, he didn’t get much tick, but he did play a pivotal role in the Mavs’ come-from-behind win against the Lakers in Game 1 that set the stage for an important sweep. That Robert Horryesque contribution is how the #winner tag is earned. If the Mavs don’t win Game 1, they obviously don’t sweep the series. Do they even win it? If so, do they have enough left in the tank to shock the world against Miami? Mark Cuban is thankful that they don’t have to wonder. They had Brew.

After Dallas, Brew moved to Denver where he played a meaningful role — and “role” is the appropriate word — on teams that won 58 and 70 percent of their games, in two seasons (one was lockout-shortened).

In the super-fun Blog Profile series Mark Remme and timberwolves.com ran this summer, Pat had this to say when asked about his “favorite Wolves memory”:

It isn’t one single moment. It’s a collection of memories of watching Corey Brewer as Timberwolf, playing defense and chasing loose balls with reckless abandon, like his life depended on it. Brewer struggled in Minnesota, but he did the best he could and he played his heart out every second he was on the floor. Ricky Rubio has Brewer’s best qualities, and, in addition, he’s (obviously) extraordinarily skilled. I suspect my favorite Wolves memory is still to come, and it will involve Ricky putting those qualities and skills on full display in the NBA Playoffs.

Pat’ll get what must have been his wish, this season, when Rubio and Brewer share the floor together as teammates. Each is about as intense a defender as there is for his position and the Wolves will likely see an uptick in turnovers-forced and points in transition; each an area for improvement. There is legit concern among smart folks that the Timberwolves will struggle to defend in Andrei Kirilenko’s absence and with a plodding frontcourt of Kevin Love and Nikola Pekovic. Personally, I think that enthusiasm for the defensive task like Rubio and Brewer share is contagious — particular in the post-Illegal-Defense age that relies more on effort and positioning than straight-up, “lock this guy down” mandates.

When Chase Budinger and Kevin Love watch Ricky and Brew putting it on the line night after night, possession after possession, how can they do anything but their best to help the team get stops, in unselfish ways like quick help rotations and charges drawn?

I hope Brew had fun at the Fair, and I hope he has a better run as a TWolf, this time around.  Guy’s a winner and we can all agree that the Wolves can use one of those.

3 responses to “Brewer the Winner”