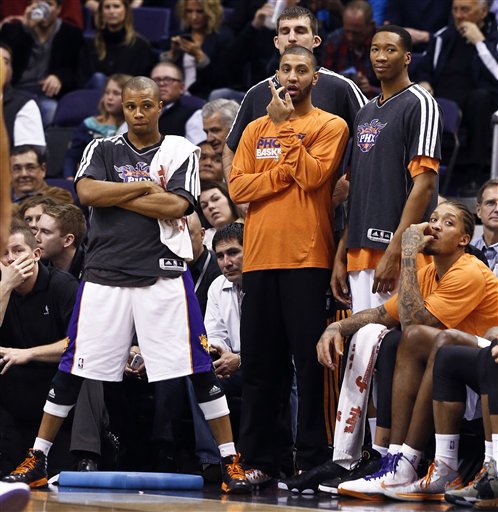 Beas and Bassy: Back again in the PHO

A few days ago, Andy G recalled a late-night encounter with Michael Beasley on the streets of Minneapolis that he and Friend of Punch-Drunk Wolves Brian J had a few years back. Andy G recounted how the incident illustrated Beasley’s  fierce loyalty to struggling teammate Jonny Flynn – a quality forgotten amid Beasley’s off-court problems and on-court lapses. Sebastian Telfair was also involved.

Those words were directed at my friend Brian, who had spent too much time in Kieren’s Irish Pub after a weeknight Wolves game in early 2011.  We were headed home — me directly, Brian to his bus stop — when we came upon a slew of Timberwolves and Pacers hanging outside of Seven Steakhouse, presumably having finished dinner and waiting for their rides.

Brian decided that was a good time to accost Sebastian Telfair.  Rather than just offer a high five and passing word of praise, Brian took the extra step of “bringing it in for the real thing,” and told Bassy that he liked him WAY MORE than Jonny Flynn.  The implication was clearer than Brian’s speech delivery: Flynn was awful, and a great deal of Wolves fans preferred to see Telfair at point guard.  (By the way, Sign Number 298,278,397,293 that your favorite team is Lottobound is when you like Bassy Telfair WAY MORE than the guy playing ahead of him and feel obliged to loudly proclaim as much publicly.)

As Brian delivered those Guiness-laced words, a tall young man in the group took issue. It was Michael Beasley. Mike was upset.

It would be an exaggeration to call this a confrontation. After all, Beasley didn’t mush Brian. But Beas made it known that ripping his teammate – even Flynn – was not cool.*  So we walked on.

I’ve always been intrigued by Michael Beasley as a basketball player.

The incident on the street made me respect him as a teammate, and, to a lesser degree (and if only for a fleeting moment) as a person.

There were a half-dozen other NBA players there.  All were within earshot. Only one stood up to the dipshit comment made by the drunk fan.

Players — especially teammates — are a fraternity. They should protect each other.

This was a harmless situation, but Beas was acting on principle – almost on instinct.  He’s loyal.

Brian J–an integral actor in this Dramedy—eventually responded in the comments section. His recollection was a bit, ummm, *different* from Andy G’s.

Brian J’s account provides new information, additional nuance, and some intriguing analysis. We’re publishing it in full, below the fold:

So the Mike Beasley story finally gets some pub in the slow news season! Kind of threw your boy, faithful PDWolves follower Brian J, under the bus here though, no? You’ll allow me to revisit my recollection of this exchange, and, for the sake of the journalistic integrity of this blog, which I greatly admire, address a few…ahem…mischaracterizations.

As I recall, Bassy seemed quite pleased to get some recognition for his solid game (he was hardly “accosted”) and was more than happy to dap me up. In fact all of the other T-Wolves present (and a couple of Pacers who were there too) were basically nodding in agreement. After all, I was only articulating, albeit in a moderately drunk, overly bro-ish fashion, what EVERY OTHER WOLVES FAN (and, I have to think, much of the team) already felt.

J-Flynn, though he seemed like a nice guy/good dude, was an atrocious NBA basketball player. This had become painfully clear to every NBA observer at this point, except that Jonny was never mercifully relegated to the end of the bench because Rambis was under some sort of mandate to play him until the bitter end. And, it’s not like I was straight Jonny-bashing either. I believe I said something to the effect of “Great game Bassy. Man, we wish you’d get some more minutes over Jonny” – ultimately kind of an inane comment, since that is what everybody wished, but no great insult to J-Flynn. (And yes, clamoring for Bassy is a sad commentary on the state of the Wolves those days). And while Beas might have taken issue with my specific mention of Jonny, he should have recognized that since Bassy and Jonny both play point guard it was kind of an either/or proposition. Hell, Mike Beasley should have wanted to Bassy to play some more minutes over Jonny.

Certainly there’s a line of player criticism that shouldn’t be crossed, especially when things turn personal, and I respect that Beas was ready to stand up for his guy. But a slight, GLARINGLY-TRUE dig at Jonny, buried in a complement to Bassy, hardly rises to the level of a “dipshit comment”. Which is maybe why none of the other Wolves seemed to blink an eye at my moderate affront to their teammate, but instead stood around in tacit agreement. (It had to be blindingly obvious to the rest of the team that SOMEBODY other than Jonny should have been running the point).

Unfortunately, especially after this latest incident and amid rumors that the Suns might be done with him, Mike Beasley is the one who comes off looking like a dipshit. I don’t necessarily mean that in a pejorative sense (no, really!), but more as an expression of disbelief and disappointment at the waste of immense talent here. It’s hard to believe that of the three guys smoking pot at rookie orientation a few years back, Darrell Arthur and Almario Vernard are enjoying solid NBA careers (though good lord it pains me to admit that about Rio) while the guy who averaged 26 and 12 at Kansas State is teetering on the brink. I respect that Beas is a loyal guy, and by all accounts was a fun teammate to be around (any friend of Kevin Durant’s is a friend of mine), but it’s hugely disappointing that he hasn’t been able to get it together enough to establish a successful career.

Doesn’t being a loyal (in a different sense) teammate also involve figuring out your defensive rotations, minimizing the ball-stopping, choosing more hard drives to the hole over long two’s, and just generally maintaining focus on the court? I enjoyed watching Beasley’s talent and style as much as anybody (well, ok, maybe not as much as PDWolves), but I have a hard time respecting him as a player/professional at this point. Obviously we can really only speculate on all the factors at play in Beas’s decline (Does he have some kind of attention-deficit issue? Has he always smoked too much weed? Has he been in situations that were a bad fit? Does he eat too many skittles?), but he has never seemed to take his job seriously enough to capitalize on a level of athleticism and talent of which most players can only dream. In the end maybe he’s just a goofball, and probably a likable one on a personal level. I guess I just wish he was more than that.

So there you have it.  This is the kind of story PDW lives for. By now I’ve heard variants of it about a thousand times, and only wish I could have been there so as to be able to adjudicate between the COMPETING TRUTHS.