If you're in MN and you're not at the Howard Pulley Pro Am tonight… I don't know what you're doing. #ProAmPlayOffs

It’s Playoffs Week at the Howard Pulley Pro-Am.  I had yet to make it over to Eagan this summer for the state’s best offseason run.  My dad called to tell me he’d be there.   Still, I was on the fence (Minneapolis to Eagan feels like such a trek on a Tuesday Night), until Royce White tweeted that he’d be playing.  After all, what else was I going to do that beats getting a rare look at the 2012 first rounder from Iowa State?  (That I’m now blogging about it should help answer that question.)

The Howard Pulley Pro-Am — on the right night — is good Minnesota entertainment in the dog days of summer. If you take an interest in homegrown hoopers and the Golden Gopher program then you’re likely to catch familiar faces playing a fun brand of ball.  HP runs include a 24-second shot clock and professional rules, so the game is up and down.  Technically, there are coaches.  In reality, the best players run the teams.  The crowd is comprised of family, friends, significant others and diehard hoops junkies.  There is no admission charge.  Everybody has a courtside seat.

Most importantly, the basketball is serious.  Especially in the playoffs.  KG used to come catch the Finals.  The players in these games span almost two decades of Twin Cities basketball history.  Tonight’s game included a backcourt matchup of Park Center stars that graduated a full decade apart.  (Last year’s Mr. Basketball, Quinton Hooker and former Minnesota State guard, Paris Kyles).  Khalid El-Amin, the state’s greatest prep star of all time, has traditionally been the face of the league.  For whatever reason his “Fish House” squad didn’t join this year.  In any event, the league is effectively a summer reunion of the last decade-plus of local prep stars, Gopher players, high-end MIAC talent, and occasionally Timberwolves.  It may not have the nationwide recognition of the Drew League or Rucker Park, but in Minnesota it’s as good as it gets in July.  Nobody shows up to get embarrassed, and these guys are far from has-beens clinging onto glory days.

Enough about the league.  This is an NBA blog, there was one NBA player on the floor, and that player was the forever enigmatic Royce White.

First, check out these awesome photos I took: 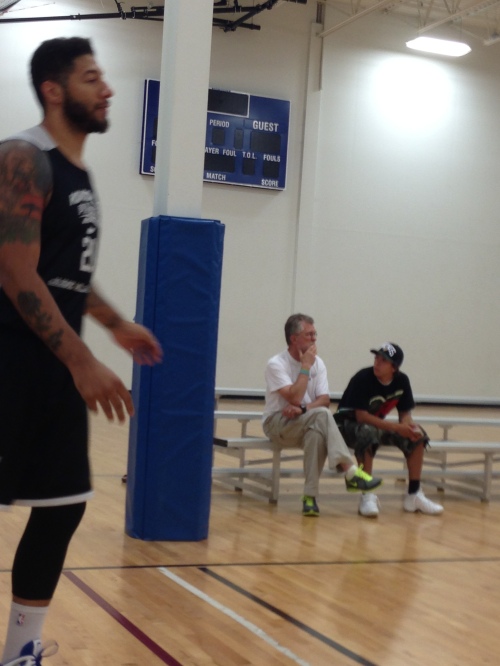 Okay, that one was during warmups, and by snapping a quick shot with my iPhone while simultaneously trying to avoid having Royce White see me snapping photos of him with my iPhone, I nearly cropped him out of the picture altogether.  I don’t know who the father-son combo is, seated in the background.  In any event, Royce is there.  Pretty big guy. 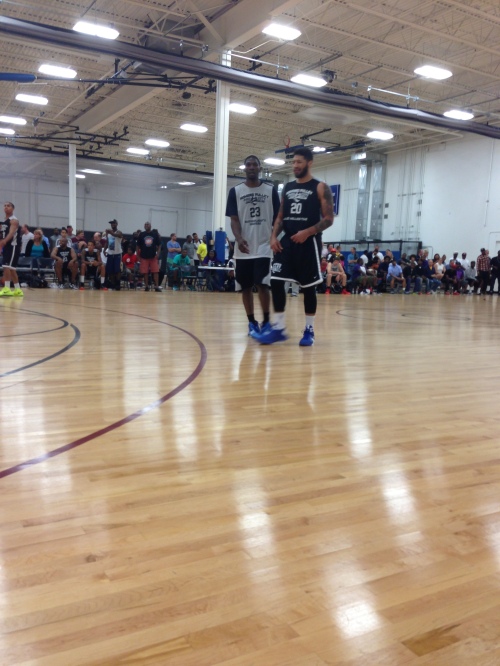 Trevor Mbakwe and Royce were battling for most of #WinningTime.  This award-winning shot catches a familiar scene.  Trevor was constantly pushing Royce on inbounds sets, leading to back-and-forth jawing; both player-player and player-official.  I don’t know if those two should’ve-been-frontcourt mates are friends, but they don’t act like it as opponents in the Pro-Am.

Royce’s team lost.  Neither he nor Mbakwe — the game’s highest-profile stars — was the best player on the floor.  That honor belonged to Kyles, a 6’2″ guard that — at this sub-NBA level — operates like a Chris Paul or Kobe Bryant, do-it-all floor general.  (That someone like Kyles doesn’t even get a D-League sniff gives me a greater appreciation for just how incredibly high the talent level is of NBA point guards.)

Royce has a hitch in his jumper that isn’t going away.  He’s overweight, but also incredibly strong and surprisingly agile.  As in his lone collegiate season, White’s primary strength is his ballhandling and ability to create scoring opportunities for teammates.

It’s going to be really interesting — assuming things progress to this point — to see Royce White in NBA games.  The only comparison for a top-of-the-key creator with that type of body mass is LeBron James.  Obviously, White does not possess LeBron’s athleticism or skill.  But he does have at least as much bulk and a similar propensity to use square-up dribble drives to create for teammates.  Bodies bounce off of Royce.  Sometimes — usually, when frustrated — he goes into full, head-down-plow mode, which will certainly lead to charge calls in the Association.

On a late-game play in this neck-and-neck contest, Royce buried a 24-footer off the dribble to tie the score.  Later, on his team’s penultimate possession, Royce cleared everyone out to go one-on-one against Jeremy Sutherland, formerly of Carleton College.  As a former Ole hooper myself, I paid special attention to this.  For one play on one July night, MIAC > NBA.  Sutherland picked his pocket.  The final play was what the crowd wanted: Royce vs. Trevor, one on one, down by two and in need of a bucket.  Again, Royce cleared the floor and went one-on-one from the left wing.  Mbakwe cut off his drive, forced White to pick up his dribble, and, eventually travel.

Royce won’t been seen again in the Pro-Am this summer.  His team is eliminated.  I sincerely hope that we see him next where he belongs most: on the NBA floor.