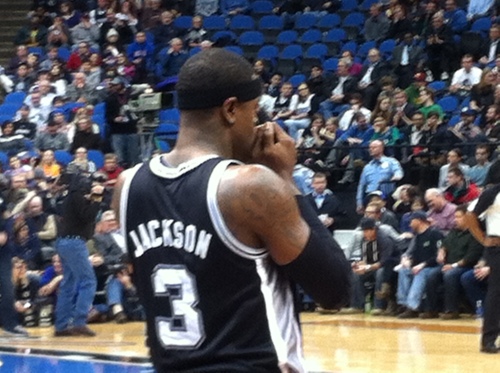 [In case you haven’t noticed, the season has hit a little bit of a rut. For the time being, I’ll follow up weeknight/work night games with 5 quick take aways. There just isn’t much to say that hasn’t been said…]

Some advanced stats for you:

Those are the regular season win totals of Tony Parker’s first ten seasons in the NBA.  In his eleventh season, the Spurs went 50-16.  This season, his twelfth, they’re on pace to win 64 games and lose 18.

Tonight the Spurs rested Parker’s fellow Hall of Famers to be, Tim Duncan and Manu Ginobili.  So Parker just did more.  He dribbled more, shot more, passed more.  Cared more.  When things were slipping he gave Danny Green an icy stare that would make Kobe Bryant envious.  He then helped set up Green for about a dozen open treys to get him going.  It worked.  Parker was everything tonight with a 31/8/5 stat line and dominant, classic Parker performance.  There isn’t a better point guard in the world, if winning is the goal.

Mickael Gelabale — sample size considered — seems to be able to do the following:

If Wes Johnson could’ve done those things, he’d probably be starting for the Timberwolves right now.

The Ricky Rubio Advantage is lessened when his genius kickout passes are followed by hesitation and dribble drives instead of a quick shot.  Derrick Williams — unlike many of his teammates — seems to appreciate him some Rubio dimes.  He catches and fires.  Sometimes it goes in.  Sometimes it doesn’t.  But the pass doesn’t go to wasted.  Derrick doesn’t hit a terribly high percentage of field goal attempts, but his effectiveness certain seems higher when he just lets er fly rather than barreling into the lane where he’s as likely to have his shot blocked or dribble off his knee as he is likely to finish.  He played well tonight, scoring 15 points and pulling down 12 rebounds.

The result of the MRI shows I have a torn fascia of my right foot. Tomorrow I'll fly back to LA to see our team doctors. #AlwaysPositive

5. An eye toward the lotto

McLemore. Can shoot as well but much better athlete RT @j_uy: who will turn out to be a better pro? Mclemore or Bradley Beal?

Get to know him.