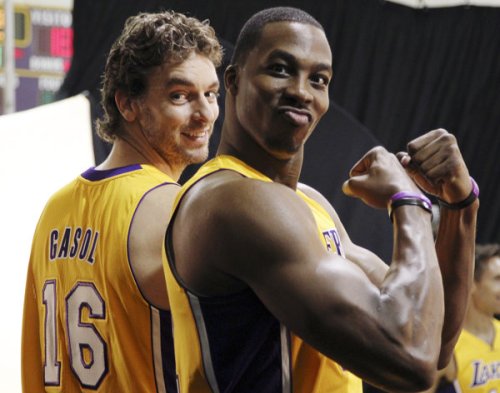 One of these guys could be a Twolf this season.

Patrick J: Pek is back. Shved is back. Rick is back. TP is back (in the bullpen). The Wolves newfound health happened prior to Wednesday’s loss at home against the Clippers. The Clips took apart the Wolves, and did it without Chris Paul.

The Lakers are in transition. Kobe’s passing. Dwight’s scoring. Nash is doing Nash stuff. The Lakers have won 3 of their last 4. Things are looking up in LaLa. Still, Gasol rumors are swirling, Ron Artest is still combustible, and no one really knows what all of this means.

You’re the Lakers guy. Walk us through what you expect the Wolves to see tonight from LAL, and then I’ll talk a bit about how I expect us to counter it.

Andy G: Things might be looking up in Tinsel Town, but let’s pump the brakes for a second. First things first: Dwight Howard flew back to LA to have his right shoulder examined. If you saw him hit the deck in pain the other night, you know that it didn’t look good. D12 might be out for an extended period of time.

Second, you certainly noticed that the Lakers–immediately after Dwight went down–lost to the lowly Phoenix Suns, getting taken apart by none other than SUPERCOOL MIKE BEASLEY.  Seriously, Beas was so awesome that folks down in ‘Zona are entering the all-too-familiar phase of “Is Mike Beasley finally figuring it out?” (Eds note: Nothing would make PDWolves happier than if he is.)

So yeah — losing Dwight Howard and games to the Suns doesn’t exactly inspire Kahnfidence in the new-look Lakers. But Kobe is dishing more than shooting, which seems to help some. Sulky Pau Gasol will be the starting center tonight, so they aren’t exactly suffering a major dropoff. They’ve beaten the Wolves 267 consecutive times (all numbers approximate) so they won’t be lacking confidence tonight. It is a game that the Wolves — in their current state — could win, but probably won’t.

What do you think?

Patrick J: I titled this post Lala #lulz, partly because of my schadenfreude at the Lakers’ plight this season and partly because of D12’s. Don’t get me wrong: the guy’s a freak athlete, we’re lucky to have such a talent in the League, yada, yada, yada. Whatever. I don’t like Dwight, and neither do most smart Lakers’ fans at this point. But your point kind of stands: during that minute where the Lakers looked awesome, D12 was doing stuff like he’d taken a time machine to Orlando 2011.

What does this mean for the game? Well, first of all, it’s probably eminently more winnable. Gasol-Pek isn’t a great matchup for the Wolves, but it’s a helluva lot better than Pek contending with the dueling banjos of D12 and Gasol, all while still trying to get enough of a sweat to get his legs back.

What I’m worried about tonight is the Kobe Elephant in the Room: do we pretend with a straight face that we can run Luke R. at Kobe? How does Kobe respond to that insult? Does he forget about the passing bit that he’s been developing, and decide to hang 50 on us out of spite? It could happen. Barea won’t be able to do anything about that either, so you’re stuck burning out Rubio on Kobe if you want to get serious about defending him.

For the longer view, I’m gonna be watching what Pau looks like tonight. Does he audition for Kahn & co, or does he continue his sulky ways? I don’t know, but I suspect this game has undue influence in determining the Wolves’ interest in him for the proximate future. Is a one-game sample a good thing? Hells no. But it’s the way the world works. That won’t be the only thing Kahn, Adelman, or whomever calls the shots at 600 1st Ave sees of Gasol, but you can believe it’ll be imprinted in their psyches as they evaluate other information. And that’s kind of scary given how schizophrenic Pau’s game seems this season.