Kevin Love and his Pursuit of Happyness 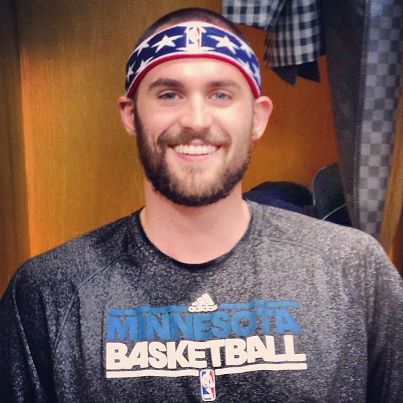 The last time Adrian Wojnarowski dished on the Wolves, he was using the news of Rick Adelman’s hire as an opportune time to blast President of Basketball Operations (POBO), David Kahn.  Woj found an anonymous league source to tell him how much Adelman despised reporter Kahn some twenty odd years ago when they both worked in Portland.

This conversation was all Woj needed to run wild with a story that’s central premise was simple: Adelman came to Minnesota in spite of, not because of Kahn.

My initial reaction to the story was incredulous: Woj was just using common sense.

The simple facts of Rick Adelman coming out of retirement at age 65 to coach a 17-65 team in the winters of Minnesota suggested to me (naive as I may be!) that Adelman likely did not hate David Kahn.  Also, while Kahn’s responsibilities over personnel decisions were almost certain to change (read: decrease) he maintained his lofty title of president.  My suspicions were confirmed in the weeks after the story was published when a local reporter (I believe for the Pioneer Press, which does not seem to allow access to old stories on the internet) wrote a piece, with on-the-record quotes from Timberwolves brass crediting Kahn with the Adelman hire. Even if Adelman privately dislikes Kahn, the tenor of Woj’s story was largely discredited if you listen to the participants themselves.

This is context for yesterday’s Woj Bomb about Kevin Love’s salty feelings toward the Timberwolves organization.

But in this case, it only adds context to a limited extent.

That’s because in “Kevin Love unsure about Timberwolves’ future” Woj didn’t resort to anon sources; this time, he had Love himself right on the record.  While we don’t have a recording of the entire conversation that perhaps would at least show a few important contextual layers (how were questions leaded, was there alcohol involved, etc.) some of the quotes are unmistakable.

Let’s all hope the Wolves move right past this and Love will come out with some conciliatory remarks about how he is happy with the direction of the team.  But in the meantime, it’s a story worthy of at least a reaction.

Mine, then Patrick J’s.

Andy G: Wow, a few things here. My first reaction is that the timing of the quotes is very odd. Many of the quotes suggest that Love questions the direction of the franchise from a roster-building perspective.  That would have been reasonable in his rookie year. Or his second year.  Or his third year.  Maybe even last year.  But now, with a team that was winning more than it was losing without Love, Ricky, and many others for a decent stretch? The team is not only deep with talent, but also is pretty stacked in high-end, playoff talent as well.

“I haven’t been in the playoffs yet,” Love says. “I’m looking at my contract in the eye of two years from now, and if I haven’t been to the playoffs – or it’s been one playoff berth – well, it’s going to be tough to say, ‘Oh well, I’m going to stay here and continue to rebuild.’ ”

This sounds similar to what we’ve already heard from Love, and it’s a reasonable position to have. I would only repeat that the timing is odd, and that if the Wolves can’t make the playoffs with this group, it’s probably because it continued to be ravaged by key injuries or because Love himself failed to live up to the superstar standards he sets for himself.

A second chunk of the piece worth mentioning is his apparently bitterness about the reaction of some in the front office had to his bizarre knuckle push-ups injury:

Perhaps those issues wouldn’t still be so raw had the franchise responded differently when Love broke his hand in a preseason workout. In a regimen he’s done most of his life, Love fractured a bone thrusting himself to his feet upon completion of a round of knuckle pushups. He missed a month on the floor, but his ears missed nothing from those in management whispering that maybe the injury didn’t happen the way Love insisted it did.

“Even people in my own organization were asking if it was a legitimate injury, people calling my honesty and integrity into question,” Love says. “And that’s what really hurt me.”

This was the most difficult part to read, because it’s so plainly stupid.

First of all, he didn’t break his hand while doing knuckle push-ups, and he should be grateful that the organization kept these obvious questions IN HOUSE.

Remember when Monta Ellis busted up his ankle and then lied about how it happened?  (He said it was playing pickup ball when he actually crashed a moped.)  The Warriors didn’t just air the grievance publicly, but they also took back lots of money from the newly signed star.  This was one of my early concerns with Love’s injury, and the Wolves did a bang-up job of seeing the forest from the trees and accepting Love’s version.  Only now that Love has told Woj that some questioned it do we actually know this to be true.

By far the most interesting portion of the story was Love talking about the perceptions of his basketball ability over the years and how they have been affected by race. I wish Woj would’ve focused the story on this angle, if only because it’s one that isn’t told enough.

For all of the jokes (and sometimes not jokes) about the Wolves’ fair-skinned roster, there has been very little serious discussion about what it means to be a white American star basketball player like Love. I half-seriously wrote about the ways white players are teased and would enjoy a more in-depth look at Kevin Love’s case, as he’s the best American white baller in some time.

Anyway, those are some of my takeaways.  I hope it doesn’t become a distraction.  Woj doesn’t seem to like David Kahn very much. That’s the main thing we can (seem to) confirm here.

Patrick J:Love’s quotes, presumably given to Wojnarowski during last week’s road trip, should be quite disturbing for Wolves fans. I think they’re more significant than Andy G does – yes, Woj worked another David Kahn jab into the story, but the story remained centered around Kevin Love. Which is just how Kevin Love likes it.

I think the timing of the story is curious for a reason Andy didn’t mention: Woj published the story before Ricky Rubio may come back for the Wolves. The blogosphere and Twitter chatter already is ripe with anticipation of when Rubio will make his much-anticipated comeback, so the Wolves can finally begin winning games in earnest rather than in piecemeal form.

No one except Woj, and maybe Love, knows how much, if any, control Love had over when Woj was cleared to publish the story. But to play Devil’s Advocate, it’s patently obvious Woj could’ve run with the same story basically the day of, if not the day after, he got all those quotes from Love in Philly.

My wife is a journalist, and I’ve seen her do it many times. Any reporters reading here who have ever worked on deadline know what I’m talking about.

So why didn’t Woj publish last Wednesday? Would it have been less interesting? Less Kahntroversial? Less Rubio-tastic? Yes, yes, and yes. There was little new Kahntent to add, and no new research. He just had to write a bit of Woj-style Kahntext around K-Love’s quotes. So yeah. The timing is fishy.

Worse yet, it reeks of an inside job. Woj relishes from his insider access to important sources, whether anonymous (in the case of most of his trade rumor reporting, for example) or on the record (as in the case of the K-Love story, for example). Here, it’s obvious Love was a complicit participant in Woj’s tomfoolery. Just read the quotes. They both had their points to make, their axes to grind, and it was Love who enabled Woj to do it.

Should Love have received a max deal? Probably.

Will he have the leverage when his contract expiration is approaching? Probably again.

Is any of this news? Not really. What is news is that Love doesn’t like that people didn’t buy-in to his amateur-hour story about breaking his hand doing knuckle pushups, even though Andy makes the pertinent point above: If K-Love would’ve managed to keep his big mouth shut, no one would know there was internal doubt about the cover up.

But that’s not how K-Love wanted it. He had to go and throw a tantrum. By outing Wolves brass’s doubt, Love mostly indicts himself, given that even his most ardent defenders over the years laughed off Knucklegate as a likely made-up story, but a mini-scandal that was likely a part of Love’s natural maturation process.

Second, now that Love has personally delivered his message, behind everyone’s back, to the biggest gossip in the League, what’s the fallout? There are three issues.

One is with the organization. Obviously, both Kahn and Taylor must be livid. More important, so too must be Adelman, whom you know hates this kind of bullshit. Regardless of Adelman’s relationship with Kahn, there’s little doubt he cringed a mighty cringe while reading this story. It probably spoiled his day.

Another is with his teammates – can you say, ‘AWKWARD’?  I mean, what are they supposed to say? Rubio and Shved might be too young and wet behind the ears to fully hate Love’s me-first spotlight grabbing, but it’s doubtful Kirilenko, and maybe Pekovic – whom I really wouldn’t want mad at me – could be as forgiving. This can’t help help chemistry.

The last is the fans. I’m not here to try to put words in anyone’s mouth, but I will say there are at least two types of fans. On the one hand, some will never even really know about this and continue to cheer the big doughy guy who puts up the NUMB#RS each night until he is gone. After he’s gone, they’ll talk about the good old days when he was a Wolf and how good he was. On the other, though, some will read Love’s behavior as detrimental to the team, and as a non first-time offender, feel it is getting old.

For these fans, some of Love’s own words might be especially apt:

8 responses to “Kevin Love and his Pursuit of Happyness”