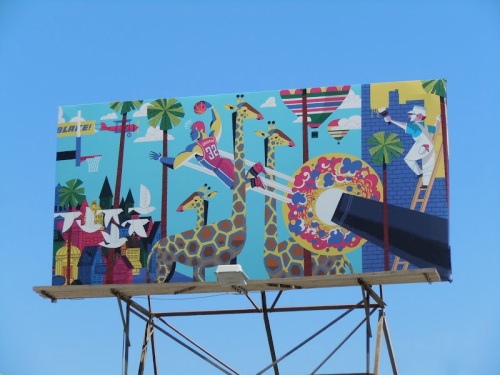 Free Darko blew up so big it got its own billboard

A while ago, I wrote a post about my top-5 favorite basketball books. I wanted to cap the list by going through my second-tier.

6. Heaven is a Playground – Rick Telander: Telander’s masterpiece chronicles his two summers observing playground basketball at Foster Park in the Brooklyn in the mid-’70s. Telander manages to make the already larger than life characters even a little bit bigger. If you don’t know who JAMES “FLY” WILLIAMS is, stop reading this and download Heaven is a Playground immediately. Or, read this, finish the blog, and then go download Telander’s book. Your choice.

7. Pacific Rims: Beermen Ballin’ in Flip-Flops and the Philippines’ Unlikely Love Affair with Basketball – Rafe Bartholomew: My landlady in grad school helped Grantland’s Bartholomew land the Fulbright he used to study basketball in the Philippines. I myself have a scholarly interest in the Philippines. In fact, I was in Manila when Bartholomew’s book came out. And let me tell you, he isn’t exaggerating when he says Filipinos love basketball. I think I saw more KG jerseys during a month there than in my last few trips home to the Twin Cities. Long story short, this is a great book. Think Telander’s Heaven is a Playground goes to Southeast Asia. Like Telander, Bartholomew has a knack for making his ETHNOGRAPHY not only accessible but enjoyable too.

8. Forty-Eight Minutes: A Night in the Life of the NBA – Bob Ryan and Terry Pluto: Details the minutiae of what could be any night in the NBA. This one happens to be a Cavs vs Celtics game at the Garden in 1987, with an eye for detail that could only captured by two master sportswriters. (Ryan just retired after 44 years writing for the Boston Globe; I discussed Pluto in my previous post.) Though the technology and entertainment that now go into the average NBA game are on another level from what Ryan and Pluto observed, they take you inside the action better than any other book I’ve seen.

9. The Jordan Rules – Sam Smith: This book was my first exposure to the tabloid-style basketball journalism guys like Smith and Peter Vecsey (it’s tempting to put Woj in this category, but the hit-to-miss ratio on his RUMINT seems better than Smith or Vecsey’s). It was also my first real exposure to the idea that Jordan is a self-centered dick. I bet Kobe Bryant keeps a dog-eared copy with him on the road.

10. FreeDarko Presents: The Macrophenomenal Pro Basketball Almanac: Styles, Stats, and Stars in Today’s Game – Bethlehem Shoals,  Dr. Lawyer IndianChief, Silverbird 5000, Brown Recluse Esq, Big Baby Belafonte (Illustrator): Shoals is the indie Simmons. When The Sports Guy was getting big on ESPN, Free Darko was blowing up Blogspot. Just after Simmons published his book on NBA history, FD released theirs. When Grantland became a thing, so did The Classical. Simmons’ writing is more accessible, and it produces more interesting analytical insights per word than Shoals’ – which is saying something given Simmons’ ridiculous word counts – but it was the FD crew’s intellectual quirkiness and artsy aesthetic that made me think blogging would be not only fun but it could also be cool. Besides, Simmons gets enough attention already, so the indie analogue gets the nod at #10. If nothing else, read The Macrophenomenal Pro Basketball Almanac for the great illustrations if not for the GILBERT ARENAS FOREWARD.

Eric in Madison suggested a bunch of great titles in the comments last time. What else is missing?