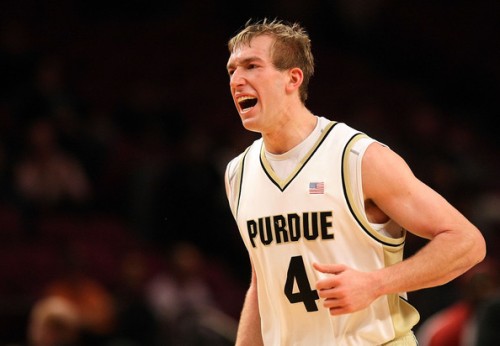 Wolves fans have grown accustomed to FUN-FILLED draft nights, where the home-town squad picks at least once in the lottery, again in the late 1st Round, a time or two in the second, and then makes a half-dozen trades (or “sales” as the case may be) just to keep us on our proverbial toes (which, these days, just means Twitter.)

So tonight was kind of boring.  Minnesota traded away the 18th Pick the other day for Chase “Air Bud” Budinger leaving only the 58th and third-to-last pick in the whole draft.  I and perhaps many others was hoping that Kahn would buy back in when guys like Perry Jones III, Will Barton and Quincy Miller fell past #25.  But alas, we held strong and waited for our rightful spot.

Robbie Hummel was one of the best players in recent Big Ten history.  When he was healthy.  The hard-working and sweet-shooting Boilermaker suffered TWO torn ACL’s in his storied-but-often-impaired collegiate career.  I was in The Barn the first time he tore his knee — Purdue was KILLING the Gophers and immediately started losing when he went down in a heap.  Hummel can move without the ball and stroke it from just about anywhere.  Offensively, he could project as something of a Jared Dudley type of NBA player.  I think catch-and-shoot players, particularly the ones that can move to get open, are becoming a little bit more valuable as the game continues to shift from a pure man-to-man league to one with more zone-type of defenses.  If Hummel can hold his own defensively (probably the concern with his position and knee problems) he might make the team and even contribute some.  At #58 I think Robbie Hummel is pretty good value.

A few bullets about the rest of the 2012 NBA Draft:

* Michael Kidd-Gilchrist is not the player for a team like Charlotte.  He’ll work his ass off and be all kinds of long and athletic.  But seriously, how does that team expect to play offense without a player or two with some go-to moves to rely on?  Maybe Kemba Walker improves some.  I just don’t see it.  Charlotte should’ve taken Bradley Beal or Harrison Barnes.  Or just trade the pick.  I like MKG and hope he does well, but I hate that situation for him.  Corey Brewer came to Minnesota with similar circumstances and we thought he was terrible because he wasn’t polished offensively.  On a better team (like his own Nuggets) he can specialize and fit in.  MKG could have done good things for a better team.

* Worst pick in the draft, all things considered, has to be Austin Rivers.  Right?  I mean, how does he share the ball with Eric Gordon?  Or are the Hornets going to let Gordon walk?  (Not what they’re saying publicly.)

* Steals of Draft: Royce White to Houston at 16; Jared Sullinger to Boston at 21.  Not even sure there’s a close third.  If I were Houston, I’d unload the vets for young players and picks, bottom out, get some future lottery picks, and do this the old fashioned way.  Royce & Jeremy Lamb is a great start.  Let those two get their rookie reps and good things will come.

* Perry Jones III falls all the way to Oklahoma City at 28.  He’s not very good at basketball yet, but 6’11” with a 38″ vertical has a way of learning.  Sam Presti wins again.  PJ3 won’t play a lick of meaningful basketball next year.  But in two years, when Harden or Ibaka is gone, he might just fill a need and fill it well.

* Thomas Robinson to the Kings is bad news for the Wolves.  Robinson and Cousins are going to beat the hell out of opposing front lines.  I’m glad we have Pek.

* Cleveland struck gold with Kyrie Irving, drafted 1st Overall a season ago.  Since that pick, they’ve drafted Tristan Thompson (at the time, and now, considered a reach) and Dion Waiters (tonight, considered a reach) with 4th Overall Picks.  It isn’t using hindsight at all to say Cleveland should have a Kyrie Irving/Harrison Barnes/Jonas Valanciunas (or substitute Thomas Robinson in for Barnes, whatever) nucleus right now.  Dan Gilbert needs to cool it with the Comic Sans and just make some decent draft picks.  Cleveland could be in such a better place right now than it is.

Anything else?  Not a very exciting draft night, all things considered.  Expect more fun in the coming weeks.  Randolph, Beasley and Webster will be unofficially “let go” on Saturday, kicking off what promises to be an interesting free agency period.  We’ll stay on it.