The Old and Enigmatic Kobe Bryant 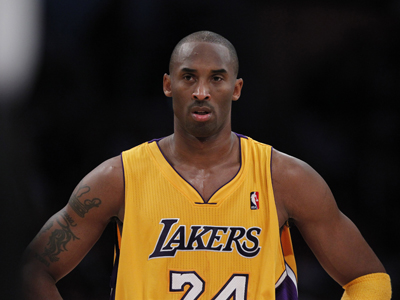 This coming Thursday is the tenth anniversary of the first time I watched Kobe Bryant play, in person.  In rather odd circumstances (for me, at least) I was able to attend this game at Staples Center.  While this playoff series (2002 Lakers-Kings) is one of the most-famous non-Finals in NBA history, this particular game is not a reason why.  Rick Adelman’s Kings pounced on Shaq and Kobe in the 1st Quarter and never really let up.  Chris Webber and Mike Bibby handled them from start to finish, extending the lead to 27 in the 4th Quarter.  Looking at that box score, it’s interesting to note that Adelman only played seven guys in that playoff game.  As you probably know, the Kings lost Game 6 largely due to horrible officiating and Game 7 (in overtime) largely due to missing free throws.  Kobe and the Lakers went on to win a third consecutive NBA title.  He was in his prime, closing out big games when Shaq and his free-throw shooting took a necessary backseat.

But the details of that game or those playoffs are not why I bring it up.  I bring it up because it was ten years ago and Kobe Bryant is still at the forefront of NBA Playoff discussions.  And not in the way that Kevin Garnett and Tim Duncan are.  Those guys are important–integral, even–pieces to their respective contenders.  But Kobe, at this late stage of his career, is still THE GUY on his team that hopes to win a championship.  It won’t happen; not after he blew Game 2 with late turnovers and bad shots, and his team let another slip last night in Game 4.  But still, a second-round playoff appearance is a respectable season–the Wolves have only made it this far once in 23 seasons–and Kobe remains heavily involved in everything his team does in reaching this success.  On Friday, he dropped 36, 7 & 6 in a close win.  Last night, he had 38, 8 & 5 in a close loss.  While his efficiency has dropped from his prime years, Kobe can still put up huge numbers on a team that competes with the NBA’s best.

Yet watching this Kobe Bryant is not like watching the one at Staples Center ten years ago.  As to be expected for a wing player in his sixteenth season (most of which included extended playoff seasons) Kobe has lost a step.  Maybe two steps.  He came into the league as a freakishly-athletic Michael Jordan prototype, winning the dunk contest as a rookie.  Wolves fans might remember this little display of other-worldly hops.  With that athleticism came the ability to slash through the lane, fly to the basket, and get dunks, layups or free throws.  Consistently and against anybody.  Kobe doesn’t have that gear anymore, and has had to make adjustments.  His post game has been one of the league’s best for years and continues to evolve.  Kobe was the first of a growing number of current ballers who seek out The Dream for expert instruction on footwork.  But unlike when MJ made the same transition from primarily-slasher to primarily-post player, in today’s post-Illegal Defense Era a single player cannot consistently dominate with a back-to-the-basket game.  I’ve already gone over this and won’t beat that dead horse too much.  So with current rules that prevent dominant post play, an aging player might just have to suck up the whole “aging” thing the way most players do.  Specifically, shoot the ball less frequently than when you were younger.

Not Kobe.  In his sixteenth season, Kobe shot more times per minute than any other season of his career except for that 2006 season with Smush & The Boys when he averaged over 35 points.  Kobe’s usage rate was also second only to his 2006 numbers.  He’s gotten older and inevitably gotten worse.  Yet he shoots more.  Complicating this further is that he plays with a pair of All-Star big men in Pau Gasol and Andrew Bynum.  Now, for the same reasons that Kobe’s post game struggles to dominate, neither Gasol nor Bynum can be relied upon for scoring production in every game.  There have been, and will continue to be times when Kobe needs to shoot a lot.  But he’s taken it so far beyond reasonable this year that it really makes you wonder where his motivation comes from.  Myles Brown speculated in an excellent piece for Slam Magazine:

There are no simple answers anymore, only opposing needs and desires. Kobe wants to win. This is inarguable. Kobe also wants to win his way. Problem is, when the Lakers are mentioned as title favorites, the primary reason isn’t Kobe—it’s the frontcourt. At times, though, Kobe seems to struggle with that notion. Bynum and Gasol can occasionally appear pensive, sluggish or unfocused, even with the ball. Besides, deference conflicts with Kobe’s drive to be the best: an admirable ambition that many Laker faithful have accepted, even when it leads him astray. For Kobe, it’s an attitude borne of preternatural ability and competitiveness, yet more importantly, a viewership enamored with legend making.

There is a lot about this Kobe situation that is really uninteresting.  An aging player who we’ve watched for sixteen years has an undying ego and shoots a lot.  We’ve long been familiar with Kobe’s dismissive side and his petulant nature.  It puts an especially-unattractive spin on the increasing number of nights when he doesn’t have it going.  But he still has apologists:

Kobe's worked his entire career to be in this position, still playing at a high level despite mileage. Piss on that if you want. But I don't

He has his detractors:

Kobe Bryant checked in with an 11-point lead, made 2 of 10 shots, and Lakers lost by 3. Persistent crunch misses have a cost.

I have trouble concluding much of anything about this older Kobe.  He’s an enigma.  Even if he consistently fed the post, I still think the Thunder would beat his Laker team.  His new coach, Mike Brown, has a history of allowing one player (previously it was the much-more capable LeBron James) to run the entire offense.  Maybe he wants Kobe to play this way?  Kobe detractors (“haters” is so Twitter-lingo) would like this 2012 Season to be the first line on his basketball obituary.  They’d like his legacy defined by his sixteenth season, conveniently forgetting the countless times he dominated big games en route to another championship.  I’m not anywhere near that crowd.  The rule changes mattered for a player like this.  Compare him to Michael Jordan and that is a factor.  Compare him to LeBron James, not as much.  In his eighteenth season (2013-14) Kobe will earn over $30 Million.  He won’t be worth half that much money, unless he goes Barry Bonds on us and shows up with a size 9 & 5/8 baseball hat.

At this point, the most I can say with certainty is that sixteenth-year Kobe is a high-volume scorer on a good team.  If he had better shot selection, they’d be a little bit better, but they’re still pretty damn good.  I guess that isn’t a very-interesting way to describe it.  Maybe this Kobe is a lot less interesting than many seem to think.  That’s where this rambling has taken me.

11 responses to “The Old and Enigmatic Kobe Bryant”