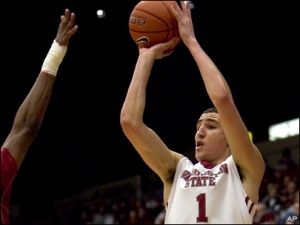 The game wraps have become fewer and farther between, but I attended this game so it makes sense to post some notes.

For much of the 2nd Quarter, this game felt like a breeze.  The Warriors scored 4 points in the first 9:03 of the period while the Wolves built up an 18-point lead near the half.  For the final 26:57 of the game, the Warriors would outscore the home team 72-51.  Those 72 points came the easy way; many from Charles Jenkins uncontested layups.  Kevin Love was needed as a help defender, but he either lacked the energy or inclination to play that part on this night.  On multiple–possibly consecutive–possessions, Love watched dribblers take the layup when he was within range of at least a foul, if not a solid contest.

But the loss isn’t all on Love.  As we’ve seen since The ACL, the Wolves just aren’t very good without Ricky Rubio directing traffic.  The wing play is wretched, and Wes reminded us of this with a slew of mistakes in the 3rd Quarter tonight.  Whatever is causing him to remain a starter will certainly not last beyond this season.  Pat and I were chatting about Wes’s place in recent Top-5 Draft Bust infamy, and the only names we could think up (without actually looking it up, which admittedly would have taken 2 more minutes than this post actually will) were Adam Morrison and Sean May.  And those two could at least blame injuries for their problems.  Going back further in time is Chris Washburn, who might be the worst bust in NBA History.

What else from this game?

* Klay Thompson.  I’m a fan.  I’m a fan of every NBA player who runs intelligently off screens and buries jumpers.  It’s an exclusive club and Klay is already in it.  In the offseason he can smoke cigars and drink scotch with Ray Allen and J.J. Redick (or whatever they do in that club, for fun.)  I had the crazy thought during this game that I’d trade Derrick Williams, right now, for Klay Thompson.  (Is that crazy?  I hope it is.  I’m pretending that I never thought it.  Let’s move on.)

* Derrick Williams.  I love the guy, but why does he still do that dumbass shuffle before dribbling?  Why does every Wolves rookie have to do this?  Why does Wes continue to do it even though he’s not a rookie anymore?  Also, why does D-Thrill insist on jumping horizontally instead of vertically?  He does this on jumpers, and he does it when he drives to the basket.  Jim Peterson mentioned Williams’ unusually-high rate of getting his shot blocked.  Ironic, since, HE JUMPS OUT OF THE GYM!  Williams is always leaning and twisting and leaping forward or sideways.  Aside from the Rubioops, which won’t be here until next November at the earliest, we’ve rarely seen D-Thrill just set his feet and cram on people.  Here’s to hoping that changes.

* The Jazz, who we’d love to make the playoffs, are not looking good to make the playoffs.  They lost a tough one to Phoenix tonight.  Big Al hit two shots to tie it, each time being answered by a Steve Nash dagger.  Utah is now 10th in the West, and 1.5 games behind the 8-Seed.

* Alan Anderson of Minneapolis has made a pretty remarkable comeback to the NBA.  I don’t know the details of his story, but he hadn’t played since the 2006-07 season and he just started and played 31 minutes for Toronto tonight in Philly.  And they won by 21 points.  And Anderson, if nothing else, was always known for his lock-down defense.  Evan Turner was 2-10 from the floor and Iggy was only 2-6, so I’d guess he had a hand in that.  That 2001 Class in Minnesota Prep Sports was pretty legendary, what with Anderson, Joe Mauer, and yes, even yours truly.

Let’s hope the Wolves can bring a better effort next time — this was a really, really low point, tonight.