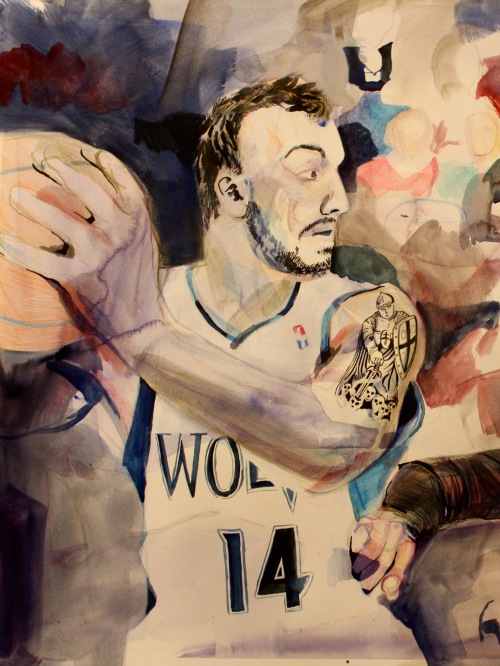 Andy G: I closed yesterday’s post with: “If last night’s loss was an eye opener for the defense, perhaps a renewed focus can keep the Celtics under 90 points tonight and give the fans an enjoyable win to watch.”

Well, the Wolves held Boston to just 88 points, won by 18, and gave the fans a win that was mostly enjoyable to watch. Despite some first-half struggles from the Kevins, the Wolves used a combination of transition offense, J.J. Barea Hero Ball, and Nikola Pekovic glass eating to take a five-point lead after two quarters. In the second half, Kevin Martin calibrated his three-point range (he was short on just about everything in the first) and Kevin Love showed off hook shots while also grinding out foul-draws to the tune of a workmanlike 23 points and 12 rebounds. The 7 turnovers on his line are evidence of some of his struggles in this game. Robbie Hummel advanced the “positive correlation guy” narrative drum that I’m beating, with 8 points in 20 minutes of (+14) basketball. On defense, Adelman said that they wanted to make Boston a jumpshooting team. They pretty much succeeded at this. Early on, those jumpers went in. Later on, they didn’t. The lead grew and the Wolves cruised to a comfortable win. This team seems like a good front runner.

Let me get back to Pekovic for a moment because I think his performance gets to a bigger-picture issue with this team. With Ricky Rubio being such a non scorer (3 points combined in the two games this weekend) and nobody on the team possessing elite shot creating in the traditional mold of a LeBron/Melo/Wade/Kobe nature, I think one of the keys on nights like last night is to pound the offensive glass. There will be games like this one (the Cleveland loss was a good example) where the offense sputters and they’ll need an alternate route to points. Pek had 8 offensive boards last night and scored 20 points on 8-9 shooting. Most of these were putbacks.

As the Wolves continue to refine their offense — currently the league’s 9th best — the challenge will be to maximize all of the immense talents of Rubio, Martin, Brewer, Love and Pek. In the early part of this season, Pek seemed almost like an odd man out, often losing shot opportunities to aggressive bucket hunters Love and Martin. One way he can unquestionably add value is to do what he did last night and crash the boards. After his huge game last night, his offensive rebounding percentage is up to 11.1 percent. Last season’s was 13.1 percent. It’d be nice to see him focus on getting back to this one skill that will be hugely important, particularly if Rick staggers his bench rotations like he did over the weekend, pairing Pekovic with Barea. J.J. is certain to create “Kobe Assist” opportunities with his kamikaze drives that usually draw an extra defender and often times clank off the rim.

All in all, a solid win over a bad team. Adelman emphasized after the game that good teams MUST win at home. He said that you then try to split on the road. Taken literally, he’s describing a path to winning three fourths of regular season games. While that’s a bit optimistic for this team (it’d be 61 or 62 wins, which even the most optimistic would be impressed by) it’s clear that Rick expects to win this season.

What else is happening?