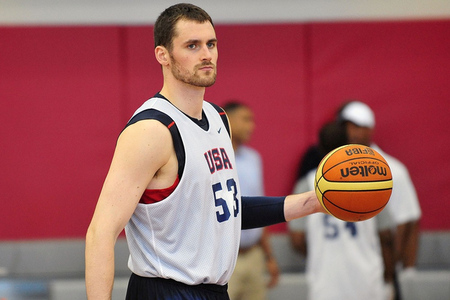 As you probably already know, Kevin Love earned a spot on this summer’s Olympic team.  If you’ve read a little bit about it, you noticed that he will likely play the center position for America’s Finest.  From Ray Richardson:

“That’s going to be my primary position throughout the event … through the friendly games and leading up to the Olympics,” Love said Saturday in Las Vegas during an interview on NBA TV. “It’s going to be a lot of the ‘five spot’ for me, so I’ll be doing a lot of picking and popping, offensive rebounding, getting extra possessions … doing everything I can to help this team.”

Picking and popping, offensive rebounding, and getting extra possessions are all things that Love does at an elite level for his NBA team.  Is there some reason that he cannot or should not play center for the TWolves?  In the middle of last season, I wrote a piece that compared Willis Reed’s role on the champion Knicks to what I thought Kevin Love might be able to accomplish in today’s NBA.  Although I’ve made my feelings known on the subject, I find it necessary to address it again now, because of the Olympic news and also because important roster decisions will be made in the coming days and weeks. END_OF_DOCUMENT_TOKEN_TO_BE_REPLACED