Should the Timberwolves Trade Kevin Love? 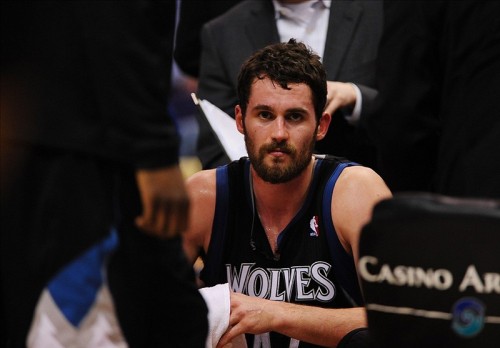 Could Kevin Love occupy a season on another team’s bench after the trade deadline?

Wolves fans learned today that All-Star forward Kevin Love may miss the rest of the 2012-13 season.

How big is the loss? It’s hard to say. Love missed the Wolves’ first nine games with a broken hand and the Wolves went 5-4 record. They were 9-9 in games he played after he returned November 21st, and they’re now 1-1 since he exited the lineup January 5th. So in terms of the W-L column, the team has been basically the same with or without him.

But the W-L column aside, one thing is for certain: Kevin Love did not play well in his limited time in the lineup after returning from breaking a bone in his hand while doing knuckle pushups under the supervision of his personal trainer in his downtown Minneapolis condo.

You don’t need stats to describe what was before every observer’s eyes: in his brief foray back, K-Love couldn’t shoot. He couldn’t run the floor. He stopped the ball too often.

Love just wasn’t the same guy we came to like last season. He was out of shape. He was disgusted with the team. He may have been – and may still be – jealous of Ricky Rubio.

Love just never came ready to play after the Olympics. That was definitely his best 2012 moment, unless you count his co-starring role as “Wes” in a great commercial with Kyrie Irving.

On and off the floor, it was pretty much a perfect storm of crappy-ness. This was a wasted season for Love, and one that should have been his time to cement his claim as the game’s best power forward.

Now, there’s another question looming: should the Wolves trade Kevin Love? Possibilities below the fold..

END_OF_DOCUMENT_TOKEN_TO_BE_REPLACED

Kevin Love and O.J. Mayo were traded for each other on Draft Night 2008. This week, each hurt his hand while away from the office.

One afternoon in college, a teammate of mine showed up at practice with his arm in a sling.  Coach delivered the news that he had slipped on an icy sidewalk.  It would’ve made sense except that I already knew the real story, which involved no ice–perhaps save the cubes keeping his drinks cold on Saturday Night at the bar.  A different teammate, at a different practice, was sidelined with “turf toe.”  Again, this would’ve been plausible (I think?  Can you get “turf toe” from playing basketball?) except that I watched him drunkenly kick a microwave down a flight of dorm stairs.  (BREAKING: College kids do stupid things.)  Well behind Coach’s back, we joked about his “microwave toe” injury.

With this background of experience,  I sent Pat a short email a few days ago with a link from espn.com:

The possibilities for how O.J. seriously cut his hand in Europe are truly endless.

He sent a brief reply:

Hehe, I can only imagine. Story would’ve been better had the accident occurred in AMSTERDAM. END_OF_DOCUMENT_TOKEN_TO_BE_REPLACED