Timberwolves vs. Celtics (The Jordan Crawford Has Killer Steez Edition)

The Wolves are in Boston tonight to close a three-game road trip. The game will be on NBATV at 7:30 P.M EST.

The 12-12 Wolves will be going up against a surprisingly decent Celtics team, whose 11-14 record is probably better than a lot of Celtics fans would prefer, given the strength of the top end of the 2014 NBA Draft, which will likely feature uber-prospects Andrew Wiggins, Julius Randle, Jabari Parker, Marcus Smart, Dante Exum, Joel Embiid, and others.

New Celtics coach Brad Stevens is viewed by many as a coaching prodigy whose prowess on the sidelines underlies the Celtics (relative) success so far. There’s been a ton written on Stevens and the bang-up job he’s doing with a Celtics team largely bereft of blue-chip talent. Grantland’s Zach Lowe has a nice interview of Stevens here. (Lowe is always recommended reading, and this piece is no exception.)

The Celtics are a team on the rise.

END_OF_DOCUMENT_TOKEN_TO_BE_REPLACED

Comments Off on Timberwolves vs. Celtics (The Jordan Crawford Has Killer Steez Edition) 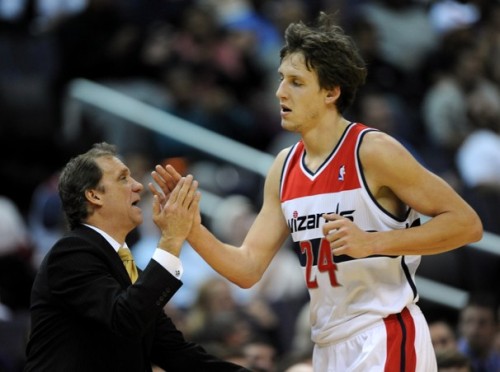 The news: Flip Saunders has been fired by the Washington Wizards, ESPN reports.

The big news: RANDY WITTMAN! will be replacing Saunders as Wiz coach.

Saunders clearly wasn’t able to get through to Andray Blatche, Nick Young, Jordan Crawford, and the other assorted Wiz misfits. Who could?

I wrote about this after attending a Wiz game last Friday.  Bottom line is, they’re hopeless.

I can’t wait to see how they react to Wittman’s DISCIPLINARIAN schtick.

Can You Hear Me Now? A Night at the Verizon Center

I’m a native Minnesotan turned academic nomad who has spent the last half-decade living in Chicago, the Bay Area, Boston, and now Washington DC. I only get to attend a few games at Target Center each year, usually while visiting family during the holidays.

But as both an NBA and Wolves junkie, a silver lining has been immersion in a variety of NBA cultures–in my case, the Bulls, Warriors, Celtics, and ‘Zards–while keeping a finger on the Wolves’ pulse through NBA League Pass, a running NBA-related email dialogue with Andy G, and religiously following a bunch of great Wolves sites.

I’ve attended games in each city where I’ve lived. Here’s a quick rundown.

My United Center experiences were pre-Rose and so pretty lame. The crowds were quiet, the United Center spacious and cold, and the neighborhood around the arena was somewhere you didn’t want to be.

My Oracle experiences were AWESOME. It was post-We Believe but pre-Implosion. The arena was cramped and stuffy and the fans were passionate and ROWDY. You’d see black, Asian, Latino, and white fans all sitting side-by-side, going all kinds of crazy for the Dubs. Whenever I went to Oracle, there was always a live funk band, cheerleaders wearing old school booty shorts and knee-high tube socks with yellow and blue rings at the top, and fast-break basketball. It was like a cross between a George Clinton concert and what I imagine ABA games were like. Best live basketball experiences I’ve ever had.

Games in Boston are fun because Celtics fans are PASSIONATE and LOYAL to the point of insanity. This was post-Title, but still when the Celtics were the best in the Atlantic. You’d feel like the guy sitting on each side of you might rip open your chest and pull out your heart if he even suspected you weren’t cheering for the Cs. Or that you weren’t a Red Sox fan. Or that you weren’t drinking Sam Adams. You get the idea. Overall, Boston games were fun because (1) the Celtics were really good and savvy, and (2) unlike the Dubs games, where fans were rowdy but just having a good time, Cs fans took the INTENSITY to a different level–so much so that ANGER and VIOLENCE always lurked as real possibilities for any perceived infraction at any possible time. I imagine this is what intense, insular religious experiences are like.

All of this is a roundabout way of setting up my first experience–last night–at a Wizards game here in DC. I knew the ‘Zards had the worst record in the league, but with their new unis and assorted personnel, I thought maybe–just maybe–the potential was there for a Dubs-like experience., with @JimmyWa playing the part of Boom Dizzle, Nick Young doing his best Stephen Jackson impersonation, Jordan Crawford shooting with the conscience of Monta Ellis, and JaVale McGee swatting shots like Andris Biedrins.

Man was I wrong.

Despite a close score, the atmosphere at the Verizon Center was flatter than Nebraska. The crowd only got loud during the 4th quarter when the Nuggs went to the free throw line, and only then because Chick-fil-A does a promotion where fans get a free sandwich when opposing players miss both shots during 4th quarter trips to the stripe. Yeah.

Then there are the players.

The Wiz’s best player, John Wall, was almost completely disengaged. Andray Blatche was a liability in just about every conceivable way. Nick Young did his best Shaddy McCants impersonation, shooting every time he touched the ball and scowling when fellow ball hogs Crawford or Blatche shot before the ball was swung to him. Trevor Booker and Chris Singleton play hard but have no talent. Booker is like Trenton Hassell–without the jump shot.

Then there’s the play itself.

The Wiz have no offense. Remember what the Cippers’ offenses looked like when Mike Dunleavy was the coach? The endless iso “plays” for Corey Maggette, and Cat Mobley, and Ricky Buckets? Fast forward to now, and you’ve got the Wiz. Any reputation Flip Saunders ever developed as a good offensive coach can no longer be credible. He will be fired soon.

The Wiz also do not have any defense. They’re terrible. Sure, Wall took some charges and McGee blocked/goaltended some shots, but their forwards were DESTROYED by the likes of Al Harrington and Danilo Gallinari.

Harrington and Gallo are the kinds of guys who don’t quite have star potential but who can and do relentlessly exploit weak defense until their line is gaudy. And that’s exactly what happened. Harrington had 29 and Gallo had 21. Both looked unstoppable, but in the sort of way that that overweight guy who hangs out at the “Y” can look unstoppable against younger, weaker players. The nail in the coffin was that Ty Lawson toyed with Wall most of the game, who looked lost trying to run whatever offense Saunders was trying to tell him to run. I bet Wiz fans wish they had Ricky.

Wolves fans are lucky. We’ve taken our lumps but things are getting better. And whenever we suffer a disappointing loss, we can always flip our League Pass over to the ‘Zards game for a quick pick-me-up.