SAVE THE CENTER: A Rule Change That Should Actually Happen 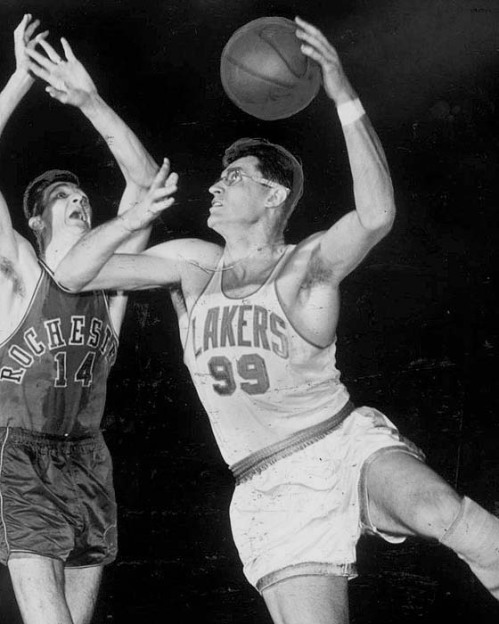 Kyrie Irving is a 6’3”, 191 pound point guard who left college after his freshman season at Duke to declare for the NBA Draft.  Having played only eleven college games, and without any of the special physical gifts that made scouts’ mouths water over Derrick Rose and John Wall in previous years, the Cavs selected Irving first overall to be the cornerstone of Dan Gilbert’s Post-Decision Rebuilding Project.

Irving’s rookie season and NBA career are off to a wonderful start.  The Cavs are noticeably improved (6-7 at this point), and he’s averaging an efficient 18 points and 5 assists per contest.  Only he’s no lock for Rookie of the Year, even if he can continue this pace.  That’s because Ricky Rubio happened. Rubio is the buzz of the basketball world due to his style and incredible ability to impact games as the Timberwolves’ floor general. Last year, Rubio couldn’t get anything right in Spain. Now he flourishes night in and night out against the best players in the world.

A month or two before David Stern (or was it Adam Silver–I’ve tried to permanently erase all memories of these suits since the LOCKOUT) called Irving’s name in New York, Derrick Rose–another 6’3” guard barely old enough to get into Chicago bars–won the league MVP for leading the Bulls’ revival from his spot at the point. The Bulls won 62 games last year, in large part due to his offensive dominance.

Irving, Rubio, and Rose are not alone in succeeding to improbable levels at point guard in the NBA.  John Wall, drafted first overall a season before Irving, had a dynamite rookie season for the Wizards and has the look of a future All-Star.  Philadelphia (10-4) is a dark horse title contender, starting 21-year old Jrue Holiday at the point.  The 11-4 Atlanta Hawks are starting a 23-year old, Jeff Teague, who was barely drafted in the first round.

Do a quick scan of every team in the league and ask yourself if any DOES NOT have a good point guard.  Sacramento?  Maybe, but only if Tyreke doesn’t qualify for the position.  The Lakers and Heat?  Perhaps, but they’re so stacked at the wing that having a point who dribbles a lot would be more of a hurt than a help.

So, all of these great point guards… does it reflect something nation or worldwide about basketball interest, and an influx of newly-20-somethings that have been dedicated to hoops?

If that were the case, wouldn’t there be a similar phenomenon amongst the bigs, too?

Dwight Howard is the only center in the NBA who can fairly be categorized as a “superstar.”  And he isn’t a star for his offense.  Last season, his seventh as a pro, Howard averaged a career-high 22.9 points per game.  The only other centers who played in the All-Star Game (Tim Duncan and Al Horford, each of whom started his career in the league as a power forward) each averaged under 16 points per game.

What happened to the 1990s, when centers ruled the league? (Well, other than games that Michael Jordan was playing in.) In different seasons, Ewing, Robinson, Olajuwon, and O’Neal averaged between 27 and 30 points per game.  Today, that simply doesn’t happen with back-to-the-basket players. Shaq, Hakeem, and Robinson won championships; Ewing came preciously close.  Yet Dwight Howard remains ringless.

If the plethora of good points and the dearth of good bigs isn’t a coincidence, then what explains it?

Instead of “illegal defense” (guard your man or double-team the ball, essentially) defenders would only be restricted to a “three-seconds” rule for situations were they weren’t defending an individual player.  In other words, zone defense was now legal–with limitations–and perimeter players could now hedge down on the post without having to commit a full double team that left their own player wide open for a jump shot.

Why the change?  No need to speculate, there.  NBA Senior Vice President of Basketball Operations explained for us back in 2002:

The illegal defense guidelines needed to be eliminated because they have become problematic. They are problematic for our fans, who don’t understand the rule. They are problematic for the officials, who admittedly have had difficulty administering the rule. And finally, our teams have used the guidelines in a way that produces isolation basketball. Teams identify areas on the floor that they can use to their advantage in a given offensive matchup and this produces a real sameness of play amongst a lot of our teams. With isolation basketball, a lot of our teams began standing around. There is little player movement, there is little ball movement, and there is a decreasing amount of fastbreak opportunities. These developments began with the misuse of the illegal defense guidelines and therefore they needed to be eliminated. By eliminating them, our desired result is to get a game that once again is based on passing, cutting, player movement, and ball movement. A game that hopefully produces fastbreak opportunities because that is the way our game should be played.

Those admirable goals were, in large part, met with the rule change.  But along with the changes were some unintended casualties: namely, most of the superstar centers who used to dominate games with their backs to the basket.  Sure, Shaq won MVP’s and titles with the Lakers, but he was a unique case of overwhelming size and skill that has never been seen before, or since.  Tim Duncan was almost as dominant as Prime Shaq, but much of his play was at power forward, thriving off of a square-up game and bank-shot that is now emulated by fours like Chris Bosh and even Kevin Love.

After the announcement of the rule change, Shaq was asked for his opinion.  All he would say was, “Stinks.”  In the same Sports Illustrated piece, P.J. Brown added, “I don’t think it’s good at all. Zones will bring the games to a grind.”  What he wasn’t taking into consideration were the ever-tightening restrictions on hand-checking that would help make point guard the easiest offensive position in the league.  In other words, the game would only come to a “grind” for posts now facing more defenders from the same island, eight or more feet from the basket.

How many NBA players today actually prefer to score with their back to the basket?  Al Jefferson is probably the best, and it’s up for debate what type of role he can command on a competitive team.  The help-down defense on the strong side, combined with allowing free roaming of the other three defenders, is a strong deterrent to the post moves once relied upon by the best in the game.

Al Jefferson's post game is muted with the current rules

Given that the point guard-to-center exchange rate seems to be approaching 50:1, and there isn’t a single center as offensively-gifted as Patrick Ewing was in an average year, shouldn’t something to be done to remedy the situation and clear the way for some talented bigs (DeMarcus Cousins, Al Jefferson, Roy Hibbert, Greg Monroe) to challenge the sort of impact that Rose and his ilk are making?

Here’s a basic idea that is more-conventional than many rule changes that the most-conservative NBA has made over the years:

In 1951, the NBA widened the lane from six to twelve feet.  This change, by no coincidence, occurred during George Mikan’s reign as the best player in the league and a flurry of (MINNEAPOLIS) Laker titles.  In 1964, a different Laker-to-be was dominating the league too much on the interior.  With Wilt dropping 100 on a hot night, the league felt the need to expand the lane even beyond twelve feet, out to sixteen.  Note that zone defense was outlawed back in 1946.  So the compromise was reached.

Defense: You can’t mess with Wilt too much; either a full double team or guard him straight up.

Wilt: Get out from under the damn hoop.  You’re enormous.

This equilibrium lasted for almost 40 years, until Pat Riley’s Knicks started playing clutch-and-grab, hack-a-anybody defense that damn-near carried them to a championship not seen in New York since the seventies.  But while New York is a big market, and the Spike-Reggie Rivalry was high entertainment, the brand of basketball was lacking.  Scoring was way down, players were being rewarded for thuggery under the hoop, and fan interest was deflating fast after the (second of three) retirements of His Airness. 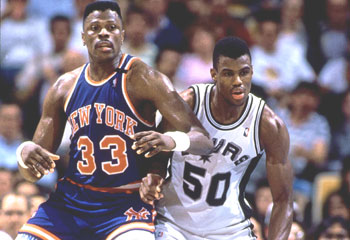 But with zone defense principles allowed for the first time in over fifty years, the league should have reciprocated to the tall folks of the hoops world by narrowing the lane.  Wilt and Mikan (and Shaq, had these changes not happened before him) needed a bigger lane because only one player was allowed to guard them.  In today’s game, posts are faced with defense from all directions.  This isn’t entirely center-specific (can you even imagine Charles Barkley trying to back his man down for 12 seconds with today’s rules?) but the seven-footers of the world are affected the most for two reasons:

* Their comparative advantage (height) is most-negated by being pushed away from the rim; and

* They possess the least ability to dribble with nearby defenders.

If the league narrowed the lane back to 12 feet (same as high school and college) two things would undeniably happen:

* Centers would score more points.  They’d be allowed to establish position closer to the hoop and traditional back-to-the-basket moves, like drop steps, up-and-unders, and jump hooks would all be executed from a reasonable distance.  Rather than having to square up and essentially dribble penetrate from the extended elbow, posts could be posts again.  In the 90’s, Ewing and Hakeem could spend as much time as needed backing down their man to get prime position.  In today’s NBA, there are too many quick hands and sneaky help defenders for the tallest players to be putting the ball on the floor with any frequency.

* Shot Blockers would matter more than they do now.  If Darren Collison and Eric Maynor and Jeff Teague and D.J. Augustine can be solid NBA players, why can’t Hasheem Thabeet?  Why shouldn’t a 7’4″ freak who can bat your weakass shit into the fifteenth row be able to make a living despite weaknesses, the same way a 6’1″ lead guard with court awareness but no value added to league entertainment be able to?  With a narrow lane comes quicker helpside defense.  Shot blocking would be more relevant than it is now.

A narrow lane would not make centers unstoppable.  The best post scorers like Jefferson, Howard, and Bynum, would simply attract more defense and their teams would have to hit perimeter shots to counter.  It’s still the team game and free-flowing concepts sought by Stu Jackson in 2002, just with a fair fight between the less-coordinated-but-mammoth centers and the lead guards that will soon need their own league to employ all capable job candidates.

The NBA has made radical changes to its rules over its history.  Think about the three-point shot.  How crazy would it seem to us young adults (who weren’t around when that change happened) if a four-point shot was instituted for 30-footers?

Is narrowing the lane to a width used at an earlier point in history so crazy?  Do fans simply not enjoy great bigs? Did somebody forget to consult Bill Walton?

If the league had to widen the lane when centers become too dominant, shouldn’t it narrow the lane when the position is nearly extinct?