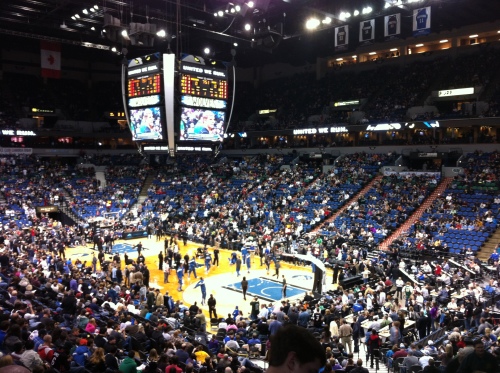 “Why do I care?” is the single most hazardous question that a diehard NBA fan can ask himself.

“Junkies” like me, and those I surmise to be a large percentage of this blog’s readership, devote considerable time and energy to a game played by rich men we’ve never met.

Lending more than surface-level thought to the reasons for such devotion is to risk spoiling the fun for ourselves.  After all, there is more “important” news in any edition of the New York Times and there are [hopefully] more pressing personal matters in any of our lives, whether they be professional, romantic, familial, or otherwise. (One of the all-time great pieces from The Onion mocks the professional sports fan accordingly.)

Zach Lowe had an interesting take related to this on a recent Bill Simmons B.S. Report podcast.  Lowe, an expert NBA analyst who writes for Grantland, grew up a fan of the Boston Celtics, just like Simmons.  The Sports Guy asked Lowe how he felt about Ray Allen in a Heat uniform; a potentially sensitive subject for any diehard Celtics fan.  Lowe’s reply was fascinating.  He said:

I admire your quality to maintain very strong fandom, but the longer I do this, honestly, the more my fandom sort of fades.  I still sort of have that in me, and my dad roots for the Celtics and that’s cool.  But even last year when they lost Game 7 I remember being like, ‘I actually don’t care all that much,’ and watching Ray [Allen] in Miami is a more analytical experience…

And, honestly, part of the reason for that…[is] just how crazy Boston fans are…Now every fan base is like that…

The “this” in Lowe’s first sentence presumably means analyzing and writing about professional basketball for a living.  The statement is fascinating not because he draws a line between “fandom” and “analysis,” but because he paints a huge gulf between the two concepts; one that he outwardly admires the ability of Simmons to cross in his coverage of the NBA.

END_OF_DOCUMENT_TOKEN_TO_BE_REPLACED

Comparing Kevin Love and Willis Reed, or “Why Kevin Love Should Play Center” 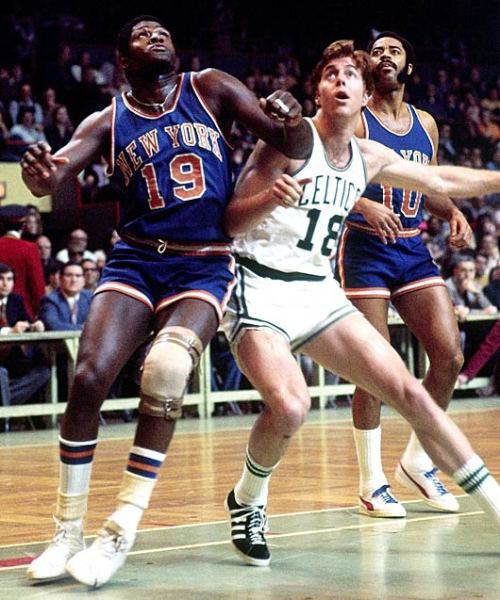 Despite the brilliant performance turned in by Nikola Pekovic (aka, The Godfather) in last night’s win over San Antonio, most Wolves fans would agree that the center position remains an area of concern.  One (or two or three or four) quality performance from Big Pek isn’t enough SAMPLE SIZE to alter my opinion on this seeming truth.  One possible solution that is often discussed (and occasionally utilized) is to slide Kevin Love over to center.  On this Wolves team that recently drafted a power forward with the second overall pick, there’s a glut that would be partially lessened if Love moved over to the low block on defense and allowed Williams to play his natural position at the four.

But, as I am sure you’ve read or heard, this is not a winning formula.  Look at the Lakers and their dynasties.  The common denominator is a Herculean Center that dominates the paint, fouls out his opponents, and inevitably blings out his hands with championship jewelry.  The Celtic dynasties included the best defensive center of all time, Bill Russell, a true rim protector whose blocked shots would often double as outlet passes to Bob Cousy.  Their 1980’s dynasty had a huge and dominant front line of Bird, McHale, and The Chief, Robert Parish.  And Michael Jordan’s Bulls, while offensively-led by star wing players, always had seven-foot goons to protect the paint.

So, is there a championship-tested example of an undersized center?

There is actually, and Willis Reed’s Knickerbocker teams of the early 1970’s are widely considered to be one of the best true TEAMS in league history.  Reed was under 6’9″ without shoes on, much like Kevin Love is.  Harvey Araton of the New York Times recently wrote one of the best sports books I have ever read.  When the Garden was Eden goes into detail about Coach Red Holzman’s decision to play Reed at center against goliath centers of the 1970’s, and how a seeming weakness would sometimes prove to be a strength.

First was the debate of whether to play Reed at the 4 or the 5.  In the early part of his career, the team made an aggressive trade for Hall of Fame center Walt Bellamy.

“I think they thought because Bellamy was bigger that I would be better as a forward,” Reed said.  Throughout his career, he was alternately listed at 6’10” and 6’9″, but Holzman had measured him at Grambling in his socks at a shade under 6’9″.  The conventional wisdom was that if they were to contend for a title, the Knicks would need more size at the position to confront the likes of Bill Russell and Wilt Chamberlain.

Sound familiar?  Remember when Ryan Hollins started over Kevin Love? (!!!)  Remember when Darko Milicic got serious tick on the Wolves?  (What–that’s still happening?!)  The concerns about Reed playing center sound much like the Wolves’ own obsessions over length up front and the need for a true center.

So, how did things work out for the undersized Knicks?  Well, a quick Google search can tell you if you didn’t already know that they won two championships with Reed playing center.  Araton describes the effective strategy of matching up Reed against legends Alcindor and Chamberlain, en route to the 1970 title.

Offensively, Reed was a nightmare for the UCLA grad.  The young Alcindor was loath to switch on screens, and against a team with as many shooters and willing passers as the Knicks, that sort of immobility amounted to playing too long on the railroad tracks.  Reed would step outside for jumpers, and when Alcindor deigned to challenge him, he would fake the jumper and go hard to his left.

In Game 1, for reasons that were related to his health, his head, or both, Chamberlain refused to move away from the basket to contest Reed’s mid-range jump shot.  Reed scored 25 points–in the first half.

The teams split the first two games in New York, but Reed erupted again for 38 points in Game 3.

If Willis Reed could pose matchup problems against Abdul-Jabbar (then Alcindor) and Chamberlain–arguably the two greatest centers in world history–could Kevin Love hold a similar advantage against modern NBA centers?  I recently wrote about the modern NBA center position, and the dearth of bigs who actually dominate games with post play.  Love has a low center of gravity and can hold position on the block in those instances when a big man decides on a post move.  Would these players enjoy chasing Love out to 23-feet, where he’s currently hitting 40.4 percent of three-point attempts?

Love battling with David Lee under the boards

Perhaps bigger defenders would guard Derrick Williams, since he’s showing himself to be more of an interior scorer than any Wolf not named Pekovic.  But so what if they do?  D-Thrill would blow by taller, slower players and create more highlights than he already does.

It’s an idea worth exploring.  Share your comments, and go read Harvey’s book if you enjoy NBA history.  Or team sports.  Or good writing.