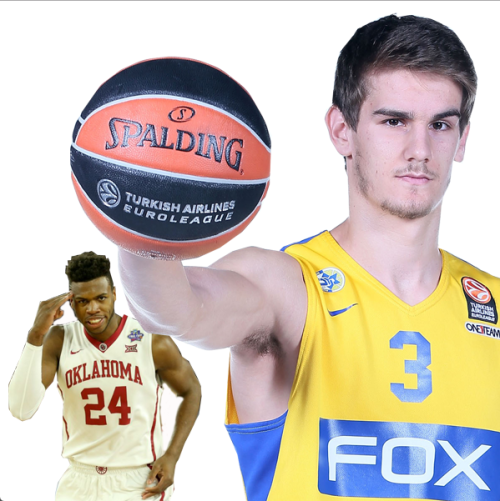 I’m sitting here watching Jalen Rose and Jay Williams on TV, discussing who the Timberwolves should draft tomorrow night with the fifth overall selection. Their mock of course has Ben Simmons and Brandon Ingram off the board before the Wolves pick. They also have Providence’s Kris Dunn — a player the Timberwolves have reportedly shown interested in — taken before five. And they have Washington’s Marquese Chriss going fourth to the Suns, one spot ahead of the Wolves.

Williams: –Minnesota, a team of slashers, what are you gonna do?

Rose: You need a spot-up shooter. You have Wiggins, you have LaVine, you have Karl-Anthony Towns inside, you have Rubio at the point. That’s my spot up shooter. [Rose points at the screen, where he’s got Jamal Murray going to the Wolves.]

Williams: Really? See, when I think about Minnesota, I think about THE BEST spot-up shooter in the draft. I’d replace him with Buddy Hield. I think you already have enough guys who can handle the ball with LaVine and Rubio and that whole cast of characters, and Wiggins. I think Buddy Hield is a really good fit on that team.

Rose: When Coach Cal is on the phone with his good friend TOM THIBODEAU, he’s bringing out lottery picks every year, and what Coach Cal wants he normally gets!

Chad Ford, ESPN’s draft expert and prognosticator, also has Jamal Murray going to the Wolves at five. In his Mock Draft 9.2 (Insider) he writes that, “Murray’s shooting and ability to play both the 1 and the 2 give them a versatile, go-to scorer to put alongside Ricky Rubio and Zach LaVine.”

In other words, Ford views a Murray selection as the Wolves drafting a “third guard,” which is either a bench player or the starting two, depending on how LaVine’s career shakes out.

A couple days ago, Ford and Jay Bilas co-authored a mock draft piece where Ford predicted who each team would select, while Bilas analyzed who they SHOULD take. In that piece, Ford predicted Murray to the Wolves, while Bilas thought they should take Hield.

To me, this is a little bit alarming, and I hope Thibodeau & Layden (that sounds like a personal injury law firm) are thinking much differently than ESPN’s finest seem to be.