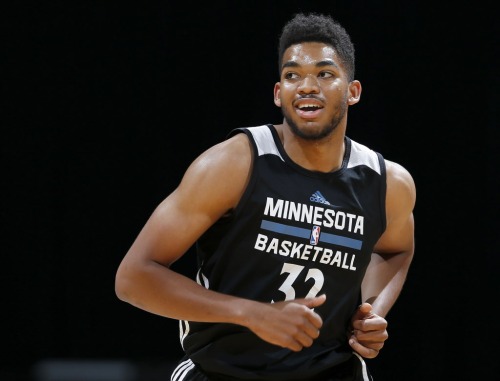 On Sunday afternoon, I posted a quarter report for this 2015-16 Timberwolves season, grading each player’s performance (relative to role and expectations) one fourth of the way through.

Since posting that, the Timberwolves have lost three times and some of those grades seem a little bit generous.

On Sunday at Phoenix, the Wolves played the (currently) 11-16 Suns. They lost 108-101. The game was not as close as the score suggested. Shortly before the end of the third quarter, after a barrage of Timberwolves turnovers led to Suns layups, Minnesota trailed by over 20 points. In the fourth, they had a crew of bench players led by Andre Miller chip away at that margin, but not seriously threaten the inevitable Suns victory. For the Wolves, it was a horrible performance without much by way of silver linings. It marked their sixth loss in seven games.

On Tuesday, back at home, the Wolves played the (currently) 11-14 Denver Nuggets. They lost 112-100 on their home floor. If turnovers were the problem on Sunday, it was defense on Tuesday; particularly defense against three-point shots. At one point in the the game the Nuggets were 7-9 from downtown as they built up a sizable halftime lead behind the hot, wide-open shooting of former Wolves guard and journeyman role player, Randy Foye. After the game, Sam Mitchell spoke in greater detail than usual about how his young players have so much to learn about playing NBA basketball, and how that was probably their most disappointing loss of the season.

Last night, on Wednesday, the Wolves faced off against the New York Knicks at Madison Square Garden. Derek Fisher’s squad came into the game with an 11-14 record. Once again, the Wolves struggled to keep up. They trailed by a lopsided 60 to 40 margin at halftime. Arron Afflalo, a solid, but decidedly unspectacular veteran guard, had a dozen second-quarter points; many times scoring with ease over Shabazz Muhammad’s suspect defense. Afflalo had 29 points in the game on 9-14 shooting. The Wolves made a better effort in the second half, cutting the Knicks lead down to 6 a couple of times with a little over 2 minutes to play, and even closer than that during more desperate situations in the game’s final seconds. But that general game trajectory — a struggling team surrendering a huge halftime lead, then making it sort of close, only to eventually lose — is a pretty common one for bad teams. The game was defined by the pace set by Afflalo and the Knicks in the first half.

Just like against the Suns on Sunday and the Nuggets on Tuesday, the Wolves were not ready to play on Wednesday at New York, and they lost to another sub-.500 opponent. Their schedule included this seven-winnable-games stretch that began with the home Lakers tilt and ends on Sunday at Brooklyn. With two games left in it, they have a single win — the overtime squeaker that saw them survive a last-second Laker miss in overtime — and four losses. Their season record has gone from 8-8 to 9-16. They have lost 8 of 9 games. Of the 8 losses, only two — both against the Clippers — came against a clear-cut playoff-caliber opponent.

If, before the season, you told me or any other interested Wolves fan that the team would be 9-16 after 25 games, that would have sounded fine. It’s a pace of about 29 or 30 wins, which would beat their preseason “over/under” in Las Vegas. It would show progress from last year, when they had the league’s worst record (tanking/injuries noted).

There’s something about how the Wolves have had their season start slipping away though, that makes it a little bit more confounding. Part of preseason expectations was a general understanding that very young, highly drafted players do not help their teams win right away. If you were told the Wolves would be 9-16, you probably would’ve assumed that they were giving a lot of minutes, and a lot of shots, to Karl-Anthony Towns and that he was mixing in some hope-inspiring highlights with some patience-requiring rookie mistakes. On the contrary, Towns has played more like an all-around stud, more often than not. He’s averaging 15.4 points per game on 53.5 percent shooting. He’s hitting 43 percent of his threes and 84 percent of his free throws. He’s pulling down 9.1 rebounds and blocking over 2 shots per game. These stats are coming in just 28 minutes, too. Per-36, his production is even better. His defense is mostly good; considerably better than some of his older teammates. Towns has advanced stats — a PER of 22.5 and win shares per 48 minutes of 0.166 — that describe a very good, possibly star-level player. The eye test validates those stats, too. He looks equal parts aggressive and smooth, blending in physical post play and rebounding with an almost unrealistically-nice touch on his jumper.

Last night against the Knicks, after a shaky first half, KAT ended the night with 25 points and 10 rebounds. Nothing about his performance seemed out of the ordinary or unsustainable. If he gets enough playing time, he’ll have many more 25 & 10s before this season is over. If anything, he’ll probably start dropping 35 on hot nights.

Towns being this good, right away, does two things for the State of the Timberwolves:

The eventual stardom of Towns and Andrew Wiggins is the most important Timberwolves issue. Championships are almost always won with two or three great players and more than anything else, the Wolves need Towns and Wiggins to become great. That KAT already looks this good, barely 20 years old, is pretty strong evidence that suggests he will become a perennial All-Star. I’ve never felt so sure about a Timberwolves rookie, including Kevin Garnett, Kevin Love, or Andrew Wiggins. So every game that Towns looks and plays like this is a reason for a sense of optimism about the state of this team, going forward.

On the other hand, with Towns playing like this, and the team having so many other players that fans and perhaps the organization are high on — players like Ricky Rubio, Wiggins, Zach LaVine, and Shabazz Muhammad — it is disheartening to see the team play so poorly. The Wolves are racking up a lot of bad losses in a pivotal stretch of the season here, and expectations for their players are free-falling from “hang around the playoff race” to “maybe we should trade Kevin Martin, call up Tyus Jones, and make this yet another rebuilding tank-job.” If that happens with this team, with Towns being this good, it will cause everybody to rethink their assessments of Timberwolves Not Named Karl-Anthony Towns.

The Wolves are off Thursday, and then play against the Sacramento Kings — another eminently beatable team — at Target Center on Friday night. We will have to see if the second half of last night’s game was a true change in the right direction.

Comments Off on KAT = Great. Wolves = Bad. What to think?