The Wiggins Microscope, Part I: Finding Easier Ways to Score

First off, I just made up that title, and I don’t even know if this will be a series. But given the attention that we all pay to Wolves rookie Andrew Wiggins when he takes the floor, it makes sense to carry that over into closer detail of his game on the blog.

With a tiny sample size of three games — which also happen to be his first NBA experiences — we do not have a lot of data to work with. Wiggins has played a whopping 73 minutes and attempted 24 field goals. He’s made 9 of them.

So this is REALLY a first impression we’re talking about.

But having seen him play three real games now, I feel confident in saying that too many of his shots are of the “contested jumper off the dribble” variety. Those are fun to watch when they go in, but difficult to make consistently for just about anyone not named Kevin Durant. While Wiggins shares an important quality with KD — height and athleticism that allows him to get a shot whenever he desires — he’s clearly not as talented a shooter at this point in his young career. If he ever approaches Durant’s abilities as a straight scorer, he’ll be playing a Hall of Fame career.

So what can Wiggins do, for now, to get easier shots and score a little bit more efficiently?

His first two baskets against the Pistons on Thursday night offer a road map:

Click on that link to see the video, but for the post, I just copied some screen images to show what I mean:

Thaddeus Young grabs a rebound and passes to Ricky Rubio. Meanwhile, Wiggins is off the screen because he ran up the right side of the floor so fast:

Rubio passes to Wiggins in the corner. Because the Wolves pushed the ball in a secondary fast break, the Pistons defense is not set. Kyle Singler, guarding Wiggins, is off balance while closing out. More importantly, the Pistons front line is not all the way down the floor to defend the basket. 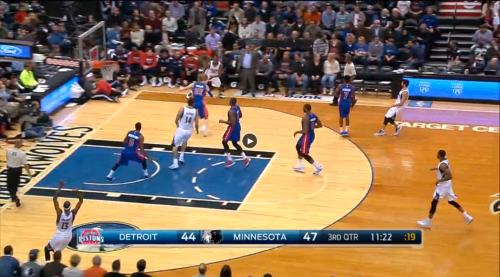 Because Wiggins is so long and athletic, it takes just one dribble to get from behind the three-point line to the rim. He benefits on this play from a sneaky (read: illegal) screen set by Pekovic’s rear end. But the main point is that by hustling and beating the opposing front line down the floor he was able to drive cleanly to the basket for an easy two points.

The next play, Wiggins’s second basket of that game, was more of a highlight and can therefore be found easily on Youtube.

It’s a similar situation: a (sort of) secondary break, with Detroit’s defense not yet set, and Wiggins capitalizing with a strong, one-dribble drive from the corner to the rim. On this one, he draws contact while (way) up in the air, and collects himself to finish it plus the foul.

After last night’s game, Flip gave an enlightening answer to a question about Wiggins and what he has to do to earn playing time. Flip said, “When he comes out of the game, he comes out for lack of effort. Everyone knows that when he was at Kansas, people thought he floated at times. So our assistants on the bench, if we see if floating, we’re gonna take him out. If he’s not playing hard, we’re gonna take him out. Eventually what he’ll do is he’ll learn. I said to those guys today, ‘KG’s first 20 games he averaged 19 minutes a game. 5 points and 3 rebounds.’ There’s no one in there that plays half as hard as he played.”

I don’t know if Flip and the assistants are specifically looking for more effort in running down the floor on offense, but if they are making this a point of emphasis it seems that it will benefit the rookie’s scoring efficiency in the short term.

Comments Off on The Wiggins Microscope, Part I: Finding Easier Ways to Score