Bill and Jalen on the Timberwolves 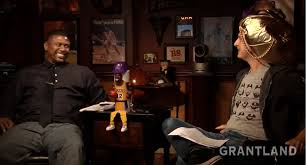 Bill Simmons and Jalen Rose are back with their NBA Preview. Shot in countdown-style Youtube videos that go team-to-team, from projected best to projected worst, you get a 15-minute read-in to what these guys really think about each team. As such ubiquitious basketball personalities, whose “meta” usually covers the entire league, it’s a different thing when, each season, Bill and Jalen “drill down” into their rankings and outlook for each and every NBA team.

Today, Bill and Jalen posted their annual video about the Wolves. Here’s what I thought they were off and on about:

1. Schizophrenia about Thad Young: At one point in the video, Bill and Jalen say that acquiring Thad Young made absolutely no sense for the Wolves because he’s a veteran. At a later point, they talk about how the team doesn’t have any veteran leadership–guys who have been putting in work who can be recognized by the young players as someone who can be emulated. In my opinion, they have to cite Young here, and retract the earlier statement that trading the Heat’s first-round pick for young was inexplicable.

2. Ricky Rubio and Kevin Martin: They seemed to view Rubio and Martin as the exact same player, expect that Martin can make shots. This implies that Martin and Rubio are both white-ish, weak and unathletic guys who don’t play defense. Ricky’s really good at defense, and Jalen said he’s bad at defense because he can recognize a matador because he was once one himself. That doesn’t seem like a reliable evidentiary base to me.

3. Bill’s pronunciation of “Dieng”: C’mon Bill. If you like Gorgui as much as you say you do, pronounce Dieng (“Jang,” not “Dang”) correctly.

1. B & J expect the Wolves to begin 12-25 this season (Technically, Zach Lowe expects this, but they discussed it without disagreeing): That could happen. The Wolves will need to be ready for how to deal with this after the fun of the offseason. Hard decisions will need to be made.

2. The Wolves lack a team chemist: Ronny Turiaf isn’t sufficient to act as Wolves team chemist. This team is loaded with young talent. Turiaf can be an anchor of sorts. But more important will be Thad Young, Corey Brewer, Sam Mitchell, and Flip Saunders himself. While the Wolves don’t have an obvious veteran core to serve as the veteran “lead-by-example” contingent, they have enough personalities of the right ilk to be able to influence the youngsters in the desired way.

3. Future Trades Ahead: Bill says that the Wolves will be heavily involved in trade rumors, this season. He specifically lists Pekovic, Martin and Budinger as players likely to be shopped. Jalen says he’d keep Pekovic. The general discussion seems on point — including Pek’s “arguable” status — and worth thinking about as the season opens.

Comments Off on Bill and Jalen on the Timberwolves