Will Wiggins be a Wolf? Wolves-Cavs Trade Possibilities 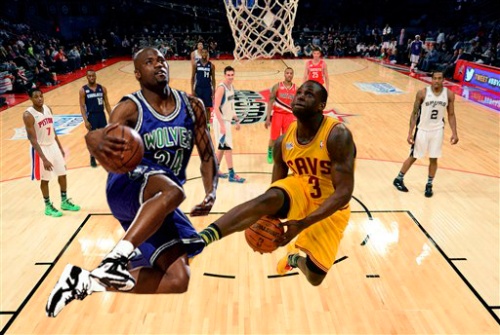 Andy G: So, LeBron made another Decision. He’s going home to Cleveland; a decision that many in the media began to expect a few days ago. He wrote a great letter explaining everything, published by Sports Illustrated yesterday.

It did not take long after the announcement for the conversation to turn toward the Timberwolves. Specifically, it was previously reported (by Adrian Woj, no less) that the Cavaliers had been pursuing a trade for Kevin Love that would be contingent on them signing James. So, now that they signed James, everyone is wondering about that Love deal…

The obvious player that the Wolves covet is Andrew Wiggins, the number one pick in the most recent draft. So far, the Cavs are reportedly not willing to part with Wiggins. Instead, they’re only willing to go as far as (something along the lines of) Anthony Bennett (LAST year’s top pick) and maybe Dion Waiters and one more guy to make the salaries match up. Maybe they’d throw in a future draft pick or two.

The Wolves, by all reports to date, will not trade Love for the Bennett-Waiters package. They need Wiggins.

So here we are, waiting for Dan Gilbert (or Flip Saunders) to blink.

Let’s start with the big question:

Do the Wolves end up with Wiggins?

Patrick J: I think they will. They have to. Without Wiggins, there can be no Cleveland trade. Look, you’re trading a top-10 player in the League in Love. You’re not getting LeBron back, obviously. You’re not getting  Kyrie Irving. I hate to say it, but the Cavs don’t have much else to offer. As excited as I get when I’m flipping through League Pass and confuse Dion Waiters with JR Rider, a package including two of Waiters, TRISTAN THOMPSON!, and Punch-Drunk favorite Anthony Bennett isn’t going to fetch Kevin Love. If it does, we need a new POBO, like yesterday. All of the other possible deals for Love are better than any offer Cleveland can make sans Wiggins. As a Dion Waiters AND Anthony Bennett fan, it pains me to admit that. But I’d take GSW’s Lee/Barnes/Thompson (?) in a heartbeat before I’d trade my All-NBAer for an asthmatic, a marginal power forward with a girl’s name, and, well, a dude who I frequently confuse with JR Rider. Love will agree to sign there because LeBron and TV and Uncle Drew endorsements.

And from the Cavs side, Dan Gilbert has to know that. And he also has to know that he needs Kevin Love now that he has almost inexplicably had LeBron James fall into his lap a second (!) time. LeBron didn’t take his talents to the Mistake By The Lake to babysit a still-raw 19-year old wing and a fat, 20-year old asthmatic player who until fairly recently was wearing a Darth Vader CPAP mask to bed every night for his sleep apnea while not being able to convert an NBA field goal for like his first five games.

So Gilbert has a weak bluff, little leverage, and so I think Flip walks away with Wiggins and some change when the LeBron dust clears in Cleveland. The biggest questions in my mind are (1) whether Flip can also smuggle Kevin Martin into any deal–that tack isn’t going so well in trade negotiations with Golden State–and (2) whether Love will introduce himself to LeBron by saying, “You’re gonna LOVE playing with me.” (Eds. Note: Patrick J pours out a little for All Jefferson.)

The other question is how long it’ll take to play out. Thoughts?

Andy G: I agree. We’re getting Wiggins. Right now the Cavs are sorting out the details of James’ own deal and presumably making some marginal roster/salary moves to clear the way for a third big Kahntract, like Love’s, while maintaining a roster of at least 12 able players.

I was watching Cleveland’s summer-league game on League Pass last night (Bennett looks to be in better shape, by the way) and Gilbert was interviewed during the broadcast. He seemed a little nervous when asked about Wiggins. Because, you know, he’s about to trade him.

If I had to guess, the finer points of the Love-Wiggins trade will involve Bennett (the Cavs will feign more reluctance than they actually have to give him up), draft picks (the team sending away a star always wants picks) and possibly even Gorgui Dieng. Mentioning the remote possibility of including Dieng in a trade — even one for Andrew F’ing Wiggins — has invited some of the fiercest @PDWolves mentions that I can recall. Fans love Gorgui. (Eds note: So do I! Not only because of his defense, surprisingly-polished offensive game, and cheap salary, but also because he’s the only NBA player that I see in my neighborhood. (Lund’s and Chipotle’, mostly.) I’d hate to see Gorgui leave.)

But here’s the thing: Let’s say the Wolves trade K-Love to the Cavs for Wiggins, Bennett, and Thompson. Cleveland is now trying to win a championship without frontcourt depth. (To be fair, they just traded for Brendan Haywood this morning. Who missed all of last season with a broken foot.) Anderson Varejao is good, but he’s always hurt. (Before the 65 games he played last year, his season totals were 25, 25, and 31.) Maybe the Cavs will keep Thompson and instead send Waiters, whom reportedly doesn’t get along with Irving. But even so, they’d be pinning a lot of hopes on the health of two centers with recent injury problems and they might really covet Dieng, whose salary is easy to fit into a deal.

On the larger point though, yes, I agree that Wiggins will be a Wolf. I’d guess that a trade happens within the next week — probably within the next few days. Then again, I predicted a Love trade to go down before the draft, too, so what do I know.

Hey, there’s Timberwolves basketball being played this weekend. They kick off their own Vegas season in about an hour against the Mavs.

Anything in particular that you’re looking out for in these games? (Besides LaVine Dunks.)

Patrick J: Besides Lavine dunks? How about Lavine handles? I’m still unsure whether Lavine has the brains and the chops to play the point–even in a backup role. Summer League isn’t the best litmus test for this stuff–I believe Randy Foye, Nate Robinson, Jared Bayless were back-to-back-to-back Vegas League MVPs–but you can at least get a preliminary eye test on prospects and see how they react to NBA-like situations and mesh with their teammates. Given that as many as three of his Vegas teammates–Gorgui Dieng, Shabazz Muhammad, and Alexey Shved–are likely to be in the Wolves’ rotation this year in some capacity, that’s worth paying attention to.

Oh, and I suppose I’ll be looking for Shabazz’s jumphook from the left block. Kind of hard to miss that bit.

What are you looking for this weekend? How Shved reacts to being given the keys and told to grab the point guard wheel?

Andy G: I’d like to see Shabazz do *other stuff* besides the lefty hook. Good defenders — maybe even average defenders — now know that it’s coming. He needs a counter move, or two. I’m interested to see what types of offensive moves Gorgui might try in the post. He has shown off a turnaround jumper that looks a little bit like the KG/LMA model. Is that something he has confidence in?

LaVine is the most interesting component to this, because we’ve never really seen him before. Like everybody else, I’m anxious to get to know more about his game.

Stay tuned for more discussion of the Love-Wiggins storylines, as well as coverage of the Vegas League.

Adios until next time.

Comments Off on Will Wiggins be a Wolf? Wolves-Cavs Trade Possibilities