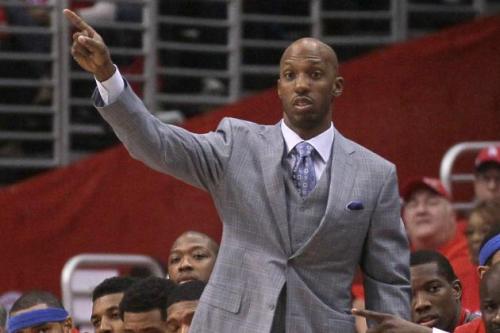 The Wolves lost to New York on Wednesday night 118-106. The Knicks seized the initiative right away, and the game was only really close after an  8-0 run in the third-quarter brought the Wolves to within three, with the ball.

On the ensuing possession, Kevin Love  got the ball on the block against Tyson Chandler and shot an ill-advised jump hook airball. It was a look Love has made plenty this season, including against solid defenders who are longer than he is.

But on Wednesday it was emblematic of his struggles to establish himself as the purveyor of the game. Carmelo Anthony and Tyson Chandler instead did that.

You see, Love typically sets his self apart from the competition each and every night, doing things in quantity and quality that have almost never been seen before. Usually when Love steps on the court, “u alreddy kno” who it is, to paraphrase famed Canis Hoopus commenter MAYNHOLUP!, because of Love’s dizzying barrage of three-point shooting, outlet passing, offensive rebounding, high-low feeds, foul draws, and, yes, jump hooks. There might not be a more unique player in the NBA – including LeBron James and Kevin Durant.

If in most games, Love stands out like the unique superstar he is, in the New York game, he blended in – in the wrong way – like the role player his critics expected him to be when he came into the League.

It isn’t as though Love’s numb#rs were abysmal–it’s just that his 19 & 8 were as quiet as a church mouse. For the first time in a long time, he just didn’t really impact the game. Love was only 3-10 from distance. He only had two assists. (Eds. Note: One of his two assists was a spectacular outlet pass to Corey  Brewer that the pair completed with almost zero margin for error. It was truly beautiful. Does anyone have video of Corey Brewer catching touchdown passes in high school? Punch-Drunk Wolves will be in eternal debt to anyone who can produce this.) Most importantly, Love only had one point in the entire second half.

After the game, Rick Adelman was asked about the role Love’s underwhelming-by-his-standards game played in the Wolves’ disappointing loss to a bad Knicks team. Adelman responded (paraphrasing), “You can’t expect Kevin to score 35 every night, you have to be realistic.”

Adelman might be right, but the problem is, we sort of have come to expect Love to score 35 a night. He scored 34 a night in February. His game logs are unreal. And it seems like there’s no upper bound on what he’s capable of.

So, when Love doesn’t have his usual superhuman performance,  The Other Guys have to pick up the slack. That didn’t happen against the Knicks.

You can immediately see what the Wolves lack when Kevin Love turns in something less than his usual stellar performance.We should store away these memories and revisit them often: We might be seeing a lot more of this if the Wolves fail to retain Kevin Love after 2015.

Against the Knicks, Love’s only teammate who played well was Nikola Pekovic, and he did so only for a stretch, during the short-lived run toward the end of the third quarter. (Eds. Note: Shabazz Muhammad also played well, if you overlook his 4 turnovers. Muhammad was 5-5 off the bench for 10 points in 14 minutes, and played with the kind of aggression that seems to consistently spark the Wolves when the malaise is starting to drip off of the unit that’s on the floor.)

Adelman took out Love and Rubio to start the fourth quarter, and subbed in J.J. Barea, who went “Full (Bad) J.J.,” failing to get Pek the ball and shooting 1-9. 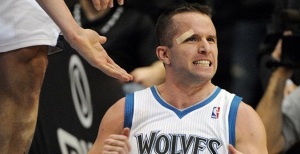 Bad J.J. came out to play on Wednesday

J.J. also won the award for “Morale Killing Moment of the Game,” when he clanked an ill-advised jumper immediately after seeing Ricky Rubio at the scorer’s table waiting to check in for him. The Target Center faithful loudly booed Barea as he left the court, and he animatedly cursed in languages I don’t know while he headed back to the bench.

It’s disappointing when any player shoots 1-9 from the floor, but that can happen to anyone. But it’s maddening when your backup point guard is unwilling or unable to run an offense that involves an entry pass to a giant target, Pekovic, whose hands are perhaps the League’s softest among NBA centers.

In a nutshell, a lot went wrong on Wednesday, and we’re not even getting into Kevin Martin’s performance or the team’s collective defensive woes. I’ll briefly touch on the latter at the end of the post.

Another Night, Another Game (The Pistons Edition)

The Detroit Pistons are in town to play the Wolves tonight at 7 P.M. As usual, you can see the game on FSN or listen on WCCO 830. I’m back in Minneapolis for a long weekend, so Punch-Drunk Wolves will be at full strength tonight at Target Center for the second-consecutive game.

Like the Knicks, Detroit is A Bad Team With A Few Good Players. For the Knicks, those players are Carmelo Anthony and Tyson Chandler. For the Pistons, those Good Players players are Andre Drummond and Greg Monroe. Josh Smith (Atlanta vintage) was once considered a Good Player, but now he’s just another Kahntract. Drummond is a ridiculous rebounder, and it will be interesting to see if Love v. Drummond results in a vicious cockfight on par with this battle royale.

The Wolves will also get a look at rookie Kentavious Caldwell-Pope, the preferred pick of many fans had Caldwell-Pope been available when the Wolves drafted at #9 overall. The Pistons snatched up KCP at #8 and the rest is history. Looking at his splits, Caldwell-Pope showed some flashes earlier in the season, and logged 30 minutes per game in January, but saw his minutes dwindle to 10 per game in February, and only 5.8 per game so far in March. It will be interesting to put an eye test on how Shabazz and KCP compare if they share the floor tonight.

Chauncey Billups signed with the Pistons in the offseason, but never plays anymore. His current knee injury might be the last straw for Billups, who  might have played his last NBA game. I don’t know why the Pistons didn’t try something unconventional and name Mr. Big Shot player-coach after Maurice Cheeks was fired on February 9th. Doesn’t it just seem inevitable that Chauncey will coach the Pistons someday? Amid a horribly disappointing season, why not make him a  player-coach? That’s a #HoopIdea that would get fans’ attention. And for the Pistons’ ownership, they’d finally get some return on their offseason investment in Billups, who’d be forced to provide tangible services to the organization in exchange for his paycheck.

At any rate, despite Detroit’s subpar record, there’s a lot to like about tonight’s game.

A Theory of the Wolves’ Season

I said I’d return to the issue of the Wolves’ defense before signing off. On that note, I wanted to flag a tweet by Friend of the Blog DrLawyerIndianChief.

Dr. LIC has a theory about why the Wolves have constantly hovered around .500 this season. He lays it out elegantly in fewer than 140 characters:

The question is, Is it really this simple? We’ll be taking a closer look in a future post.

Meanwhile, here’s some Brandon Jennings to pregame to. We didn’t discuss him above, but his crossover is filthy, and that automatically qualifies him as a PDW favorite.