INBOX: The Pelican(s) Brief, Plus Tonight’s Game against PDX 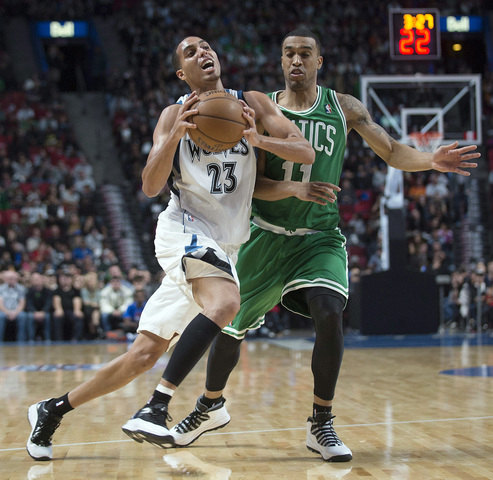 Andy G: So, last night. The Wolves lost a game they needed to win. The Pelicans have talent (Anthony Davis, Eric Gordon) but they aren’t very good yet (22-27 after the win) and they are without point guard Jrue Holiday and shooter Ryan Anderson. (The Pellies miss Jrue Holiday more than any other player, losing to opponents by 3.6 points per 100 poss. when he’s out.)

If you can believe this, the Wolves got destroyed in the fourth quarter, giving up 37 points and scoring just 20.

Their season in a nutshell, in other words.

With the loss, the Timberwolves fall to 2 games below .500 and 5.5 games outside the playoff picture. And Memphis is between the Wolves and the playoff teams.

In short, the Wolves are not going to make the playoffs, barring something unforeseen in the trade and/or injury scene.

Anything you feel like adding about that game, specifically?

Patrick J: One thing in particular: Chase Budinger. He has been bad all season since he came back from his second knee injury in as many seasons. Last night was a good demonstration of the issues we’ve seen with Bud. His calling card is supposed to be his shot. That’s why he got a kahntract here, and that’s what the Wolves needed from him, last season and this season, as they’ve struggled at shooting and at stretching defenses, outside of Kevin Love’s revelations and the here-and-there good games from Kevin Martin.

In the second quarter of the Pelicans game, Budinger looked out of sync with the rest of the team, both offensively and defensively. Offensively, he couldn’t buy a shot, missing a couple of clean looks. And on defense, Luke Babbitt (apparently pronounced “Bob-it”, as in “John Wayne Bobbit,” which I learned on last night’s telecast) was easily slipping past Budinger and getting good looks, and making plays.

Bottom line is, Babbitt looked better than Budinger – and he was just signed off the scrap heap on Tuesday. The big problem is that Budinger currently does nothing to help a Wolves second-unit that badly needs help, and we’re largely in the same position we were in last year and before Bud came back this year, with little offensive punch and some defensive liabilities that create glaring matchup problems. Budinger tied for the team’s worst +/- last night with a -13. It’s telling whom he shared that dubious honor with – Luc Richard Mbah a Moute and J.J. Barea, with whom Budinger shared the floor during some bad Pelicans runs.

A larger issue with Budinger involves the Wolves’ second-unit rotations. When Budinger is playing poorly, he and LRMAM bring out the worst in each other, since LRMAM can’t catch the ball or dribble it, let alone score it, and if Budinger is scoring the ball when opportunities arise, he isn’t helping much of defense.

The second-unit rotations continue to need tweaking, which is a bad sign at this point in the season when the team is trying to claw its way back into playoff contention – with the clock ticking.

Andy G: While we’re on this stream of negativity, I should add my two cents about Kevin Martin.

As I tweeted last night, I’ve decided that I don’t like him. (Eds note: I only mean as a player!)

His jumper is gross looking, but I don’t even care about that. It goes in often enough, when he actually pulls the trigger. But I just can’t stand — hate, in fact — how soft he plays on both ends of the floor. His weak defense has long been acknowledged and accepted as a cost on the ledger next to his efficient scoring. But he’s soft on offense, too. He purposefully avoids physical contact when approaching the rim. This is the opposite of what good players do. Dwyane Wade, Kobe Bryant, shit – even Eric Gordon, from last night’s game. Good NBA wing scorers seek contact; not avoid it.

Martin gets fouled sometimes in the weakest ways imaginable, exaggerating a glancing brush to the hip and flinging up a bad jumper, hoping to hear the whistle. Or the infamous “rip through” move that no longer counts as a shooting foul. His softness is most easily observed in transition where he will absolutely not ever suffer a hard foul, because he isn’t willing to put himself in harm’s way for the good of the team. For a counterexample, see Corey Brewer, who seems to have no regard for his own life whilst throwing down contested dunks on the break.

I’m not saying Martin is a bad player, but I don’t think he’s a good one. And he’s being paid to be a good one. For three more years after this one.

Kevin Martin is the Roger Dorn of the Timberwolves.

On defense, you end up seeing a lot of “oley bullsh*t”:

There’s another game tonight. That’s the good news. The bad news, I guess, is that it’s against the Portland Trailblazers; a team with a 35-15 record. Both teams played last night; the Wolves losing at New Orleans, the Blazers falling in overtime at Indiana, where the Pacers are now 24-2.

Andy G: A few pieces worth checking out to get up to speed on the happenings in Portlandia:

First is Bethlehem Shoals’ “The Trail Blazers go public” written for TrueHoop, yesterday. I shouldn’t have to twist your arm to read @freedarko pieces, so I won’t. Just trust me that it’s great and highlights how the Blazers fit into Portland culture and how their ascent might change that.

Second is Zach Lowe’s “The Delicate Balance of an NBA Defense,” published on Wednesday for Grantland. The piece details the “no fouls” defensive strategy of both the Wolves and Blazers. Which, you know, seems relevant as a primer for tonight’s game.

The Wolves are actually favored by 1 point tonight, according to espn.com. They beat Portland in the last matchup at Target Center in a game where the lead grew to 30+ before a Dame Lillard explosion made it almost interesting in the last few minutes. Obviously, containing Lillard — Ricky Rubio’s job, tonight — will be a priority.

Patrick J: There isn’t a lot else to be said. We’ve gone over Wolves-Portland frustrations, rivalries, and matchups before. Not that much has changed.

This will be a grudge match.

The Wolves have something to prove, both vis-a-vis Portland and to try to re-establish their bona fides for a long-shot run at a playoff berth. It’s easy to be skeptical at this point, but one thing will always remain true: Any Wolves-Blazers game is worth your time.

As for your obligatory vidz to pregame to: Since you probably won’t see Alexey Shved or Shabazz Muhammad tonight, here’s some ‘Lexey and ‘Bazzy to pregame to.

Comments Off on INBOX: The Pelican(s) Brief, Plus Tonight’s Game against PDX