Timberwolves Looking Back, Looking Ahead 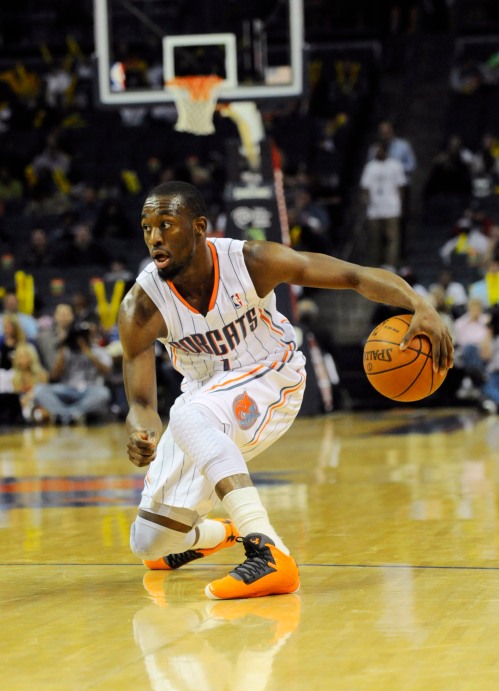 Kemba Walker has the (second) meanest crossover in the East.

Your Minnesota Timberwolves will be playing basketball tonight against the Charlotte Bobcats at Target Center.  Tip is at 7 P.M. CST. The game can be seen and heard through the usual channels.

The Wolves are coming off a heartbreaking loss to the Phoenix Suns on Wednesday night at home. Former Wolf Gerald Green–a longtime Punch-Drunk Wolves favorite–hit the game-winner on a tough baseline jumper with seconds remaining.

Tempers flared on Wednesday after Rick Adelman pulled J.J. Barea with 8:07 to go in the 4th quarter. Barea, a  player whose passion and intensity run so thick that they’re palpably evident even in pre-game warmups–the sideline-to-sideline defensive shuffle-suicides J.J. does each night as part of his pre-game ritual is all you really need to see–was visibly upset and stormed off the court, cursing in at least two languages. (Eds. Note: Barea was in fact cursing in three languages, if you count Spainglish.) The next thing you know, neither Barea nor Dante Cunningham joined the team huddle during a timeout.

Kevin Love, the team’s best player by orders of magnitude and an League-wide MVP candidate, didn’t appreciate Barea and Cunningham’s lack of team spirit. But Love himself was moody, and it doesn’t take a trained psychologist to deduce that Love appeared to be projecting frustration with his own sub-par performance onto Barea and Cunningham.

Love is serious about his image and is protective of his NUMB#RS. This video is by now a cliche, but that doesn’t mean it doesn’t mean anything.

Kevin Love’s image took a hit on Wednesday night’s loss. In one of the Wolves’ few nationally-televised games of the season–Love played downright bad basketball and looked nothing like an MVP candidate. In fact, Love’s performance was sub-par on both ends: he shot 4-20 from the field, and got lit up by Suns three-point specialist Channing Frye after repeatedly failing to close out on Frye three-point attempts. Love’s failure to close on active shooters like Frye and Ryan Anderson is not a new phenomenon, and is one of the few aspects of his game for which he can be legitimately criticized and for which he is not called out enough by writers, many of whom give him the benefit of the doubt because they love Love for his fat stats.

The Phoenix game was probably one of the few  in which Love’s reluctance to leave prime defensive rebounding position to cover an opposing stretch four ultimately resulted in his giving away more points than he generated. The bottom line is, Love got embarrassed at the worst-possible time–a nationally-televised game.

After the game was over, the fun began.

For the second time in two weeks, Love called out his teammates after a tough loss during post-game press interviews. After  Wednesday’s loss, Star Tribune beat writer Jerry Zgoda wrote that Love said that he was “angered” by the sight of a team splintered when the players should have been unified in their pursuit of a Suns team they are chasing for one of the West’s final playoff spots. Love reportedly told ESPN:

“We can’t have two guys sitting at the end of the bench, who play good minutes, just sitting there and not getting up at timeouts. We all need to be in this together. That kind of pisses me off. We’re supposed to be a team.”

Love didn’t stop there. Instead got behind the wheel and stepped on the gas:

“It’s to a point that where those two guys, if and when I did that last year when maybe I didn’t sit out for the game for 48 minutes and so on and so forth, they would have killed me. They would have aired me out. It’s two guys we expect more from them, and I think they expect more from themselves. . . . I’m not trying to single anybody out, and I don’t want to make it bigger than it is. That was a team we needed to beat tonight. Even guys that didn’t play any minutes, we need to have a team on the bench that’s really in it together.”

Jerry Zgoda reported that Timberwolves POBO Flip Saunders said the locker room issues have been resolved, and the team has moved on. Tonight, we’ll begin to see whether Saunders’ assessment was correct. In Charlotte, the Wolves play a bad Eastern Conference team on their home floor. They’re not on the wrong end of a back-to-back. Byron Mullens is no longer a Bobcat, so Love won’t have to guard a 7-foot chucker.

The Wolves should win this game, and that should help morale. At least for now. I’m less optimistic than Saunders about the team’s chemistry and combination of personalities.

And if this proves a recurring issue, Saunders will have to deal with it. There’s still a lot of season left, and we’ll doubtless be writing more about the different possible scenarios for what change might look like.

Let’s end this on a high note: Even though the Bobcats stink, in tonight’s game we get to see the prettiest post moves in the League, courtesy of former Wolves big man Al Jefferson, as well as the second (or third) filthiest crossover in the game, courtesy of Bobcats point guard Kemba Walker.

Part I: Big Al puts on a post-move clinic (literally) in a vintage video shot during his Wolves days.

Comments Off on Timberwolves Looking Back, Looking Ahead