There’s a blurry screenshot of the play.

Down by two with three seconds left, Ricky Rubio inbounded the ball to Kevin Love. Love took a dribble to his left and set himself for the game-winning (or tying? I can’t quite tell) shot. Shawn Marion then reached across Love’s arm and hand to tip the ball away. Replays confirmed that The Matrix caught at least Love’s hand, if not part of his arm. He must’ve bent the laws of physics too, because neither referee with clear sight of the play blew his whistle.

The Wolves-fan outrage was predictable, but justified. Any NBA player deserves that call. But an MVP candidate playing on his home floor, on the last play of the game?

As Adelman questioned after the game, what would happen if that were Dirk or LeBron taking that shot? The rhetorical question doesn’t even require an answer.

After the game, NBA.com’s John Schuhmann took to defending the refs’ interpretation of a rule:

"Contact which occurs on the hand of the offensive player, while that hand is in contact with the ball, is legal." @ChipsOnSports

For convenience, I’ll just paste in the rule page linked by Schuhmann, with the pertinent sections circled: 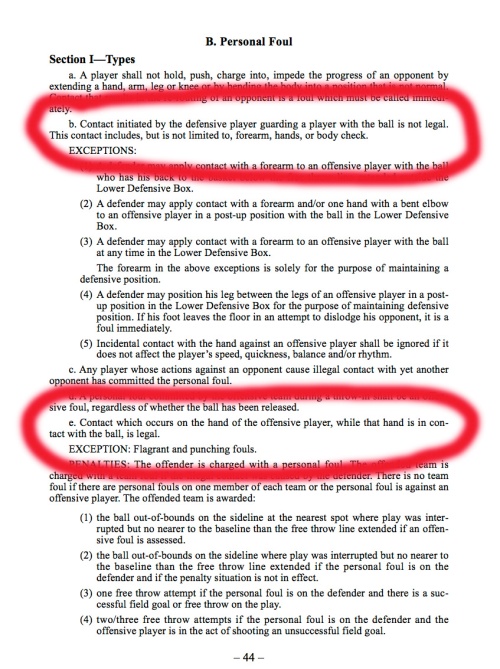 Well, that’s confusing. It says that contact initiated by a defender guarding the player with the ball is not legal. Some exceptions are listed, but none that include “contact which occurs on the hand of the offensive player, while that hand is in contact with the ball, is legal.”

It seems to me that that is an exception to the general rule. So why does it get its own rule (with its own exception)? Does it only govern plays where the contact is not initiated by the defender?

TO THE COMMENTS WE GO!

The “the hand is ‘part of the ball'” comment is listed under the “Incidental Contact” heading. To me, “incidental” is different from that which is “initiated by” the defender. If the rules are designed for player safety and to prevent roughness, how would hard “slap down” fouls (common around the basket and ALWAYS called as fouls) fall in line with that goal?

I don’t know exactly what situations the league intends to allow contact on the hand, but it seems that those rules are clearly separate from intentional contact by a defender against a shooter.

But either way, Marion hit Love’s arm with his hand.

It was a foul and a badly blown no-call.

Comments Off on Can a defender slap a shooter on the hand? (Mavs 100, WOLVES 98)