Timberwolves at Knicks: What to Watch For 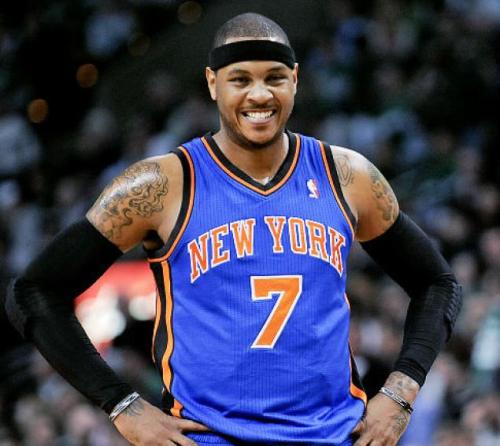 Carmelo Anthony is licking his chops at the Wolves’ defense

Your 2-0 Minnesota Timberwolves are in New York and take on the 1-1 Knicks Sunday night at Madison Square Garden at 7:30 Eastern.

Coming off a blowout victory Friday night against Kevin Durant and the Oklahoma City Thunder, the Wolves face another test tonight in Carmelo Anthony & co.

Here’s what to watch for tonight against the Knicks:

1. Defense: Defense will again be the key for the Timberwolves, especially against top scorer Carmelo Anthony. No Wolves player alone can hope to check Melo. He’s too strong for Corey Brewer in the post. Brewer, with help from his teammates, made Kevin Durant work for the few points he scored in Friday’s victory. It will take a similar team effort against Melo. Anthony is too quick, and has too quick a trigger, for Kevin Love to close out on on the perimeter, where Melo’s equally capable of pouring in buckets. Look for the Wolves to follow the same tack as they did against Durant, throwing quick double teams at Melo when he touches the ball, and forcing him and his teammates to their respective weaknesses–passing and making jump shots.

2. Kevin Love: As much as Love would likely struggle to check Anthony, so would Anthony with Love. Love’s combination inside-outside game should give the Knicks fits. Love should get plenty of shots, and if he’s hitting, the Wolves should have another big offensive night and be able to exploit the mismatch, especially if other teammates are hitting open shots off of Knicks double teams and rotations.

3. Gorgui Dieng: Now that Ronny Turiaf is out with a fractured elbow, Dieng is expected to pick up all the backup center minutes, behind Nikola Pekovic. Dieng brings a different look on  defense, protecting the rim and using his length and quickness to bother anyone looking to score near the basket. No one expected Dieng to play regular minutes so soon. What will he bring, on a night-to-night basis? We’ll see, starting tonight.

4. Knicks Depth: Amare Stoudemire, who’s still fighting knee injuries, is not expected to play tonight. And reigning 6th man of the year J.R. Smith is still suspended and won’t play either. This substantially limits the Knicks offensive firepower. Iman Shumpert, the de facto starter at SG in Smith’s absence, is a nice defender but an inconsistent shooter. The Knicks’ shorthandedness should play to the Wolves advantage.

5. Pek vs. Chandler: The best matchup of the night, on paper, might be at the center position. Nikola Pekovic is difficult for any center to keep away from the basket. The Knicks’ center, Tyson Chandler, is among the top defensive centers in the League. Will Chandler disrupt Pekovic’s offense around the hoop, or will Zod’s strength and ability offset Chandler’s length and defensive acumen. It’ll be fun to see.

Comments Off on Timberwolves at Knicks: What to Watch For