The Epic Tales of Gus Johnson 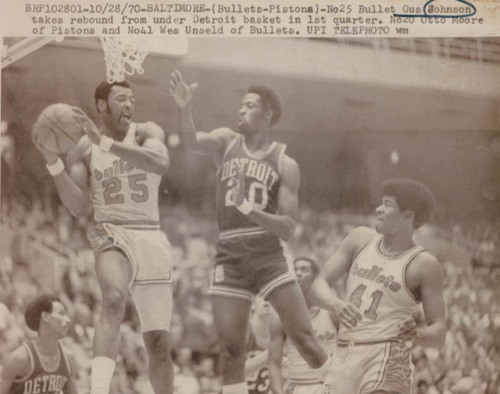 At TrueHoop, Curtis Harris shares an epic tale about Gus Johnson trying to cram on Wilt Chamberlain, only to get his self a dislocated shoulder.  Click on the link to check it out.

From Earl The Pearl’s biography:

Gus was hip, too. He had a gold star in one of his front teeth, wore great clothes, had style, sported a Fu Manchu goatee–I think he was the first player in the league to wear one–so all of the black cats on the team gravitated to him. Although he walked with a slight limp, he even made his walk look cool. Gus had a 48-inch vertical jump and could leap so high he could pick a quarter off the top of the backboard. He was a street cat, known to knock guys out and shit. But he was lovable, too. Still, you didn’t mess with him. Gus was very charismatic. He just drew people to him, and I like that. He had a funny way of talking. When we went out to restaurants he had this thing about trying to speak all proper, like he would say in his real deep voice, “Give me one of them excellent steaks and cover it with some of that War Chester Shire sauce.”

Gus Johnson: We salute you. Per the Harris piece, Johnson died way too young to a brain tumor in 1987.

Comments Off on The Epic Tales of Gus Johnson