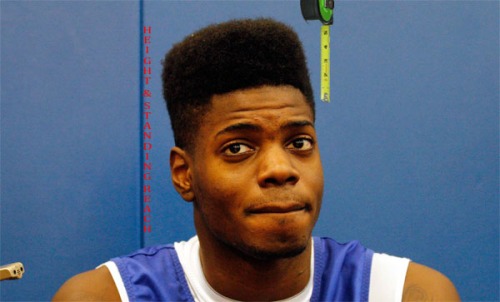 Over the weekend we took a look at some of the more interesting youtube interviews of potential draftees at the combine. Part I here. Part II here.

Now we’re wrapping up the DRAFT COMBINE SERIES with a few observations — mostly Timberwolves-related — about the measurements portion of the event. Without further ado…

If We Get Lucky: The High-End Talent

Kentucky big man and knee-rehabbing Nerlens Noel measured out at an impressive 6’11.75”. (No official word on whether that INCLUDES the four inches of flat top.) Noel has a standing reach of 9’2”. Others who entered the league with that number include LaMarcus Aldridge, Al Jefferson and Tyson Chandler. (And Kevin Durant!) It’s legitimate, modern-NBA big man size.

The RED FLAG: He only weighed 206 pounds. Chad Ford (INSIDER) quoted an anonymous GM at the combine on Noel who said, “You look at the guys who really excel right now in the NBA at the center position and you wonder how in the world Noel can play with those guys right now. But you have to remember a couple of things. He can put on weight, and since he won’t be back from injury until December or January at the earliest, it gives us a lot of time to start working on packing on the pounds.” The GM went on to essentially concede that Noel is still the draft’s top prospect by default; it isn’t a strong class at the top.

I wonder if Flip Saunders will have some deja vu if given the opportunity to draft a scrawny, long-armed seven footer with his first big splash in Minnesota? It wouldn’t be the first time. Kevin Garnett was no center when he entered the league, but that type of length, energy and athleticism can be put to use somewhere on the hardwood. Noel would be a great get.

Patrick J: The combine is always interesting because of the surprises. Granted, it’s fun to imagine that OJ Mayo and Kevin Love might actually have verticals that are comparable to Russell Westbrook and Derrick Rose (pre-arthritic knee condition), but each year the surprises make me wonder more-and-more about the value.

Take Ben McLemore: Jonathon Givony’s composite ranking had him as the 20th best athlete based on composite scores from the combine; by comparison, Michael Carter-Williams had the 6th-best composite ranking. Something doesn’t comport. McLemore is a high flyer who moves effortlessly around the court. He jumps high. He’s long. But apparently his lateral quickness in lane shuffles was sub-par, at least compared with freaks like Cody Zeller (COACHING!). What’s the takeaway? It’s that the combine provides a little bit of signal, but you have to have some knowledge beforehand to identify it, because there’s a whole lot of noise. It’s perfectly illustrated by McLemore’s middling showing. I’d still draft him at #2 because he’s probably the second-best player in this year’s draft.

If We Don’t Get Lucky: The Late Lottery Talent

Patrick J: CJ McCollum was the unabashed star of the interview session. He has a great smile and a handshake so reassuring it’ll make you forget all your problems. David Kahn would’ve thought you’d love this guy. And he might be really good. McCollum impressed throughout the combine, drawing special praise from Chad Ford, to include a Damian Lillard comparison. But do we need a guy like McCollum? I’m not so sure he’d fit in great next to Rubio, and he’d still be that undersized two we’ve been trying to replace over the last two years of J.J./Luke battling it out at that position. Shabazz Muhammad didn’t really help or hurt himself at the combine. He measured out as the kind of guy we saw with our eyes when we watched him play at UCLA. Not a great athlete, but not a poor one either. Shabazz’s knack for scoring is comparable to McCollum’s, but he has the size and feel for the game of a traditional two guard. All else equal, I take Shabazz DESPITE McCollum’s darling status coming out of Chicago.

Andy G: Cody Zeller is a… wait for it… FREAK ATHLETE!

I CAN’T SEE TOO GOOD, IS THAT JOE ALEXANDER?!

No but seriously, Zeller tested out well at the combine. First, he measured over seven feet tall with shoes on. Before you get too excited about a future All-Star center, I should add that his standing reach was *only* 8’10” — a shade under the 6’8” Gopher, Trevor Mbakwe. Zeller has short arms. But he tested out shockingly well in the athleticism measures. (Kevin Love style.) He had the single highest “no-step vertical” in the ENTIRE combine. Higher than Victor Oladipo. Higher than Ben McLemore. Thirty five point five inches. He also fared near the top of the sprinting and agility drills. I hope he wasn’t cheating with any performance enhancing drugs. Just kidding. But let’s keep this in perspective. I’ll let Jonathan Givony explain.

Difficult to understand the so-called "draft experts" bumping Cody Zeller halfup the lottery based solely on his athletic testing results.

I'm not saying Cody Zeller shouldn't be in the top-10, but to move someone up significantly because of some BS testing raises some eyebrows.

That sounds about right.

Comments Off on Draft Combine, Part III: The Measurement Edition